Home Government Demilitarization Is Not a Dirty Word 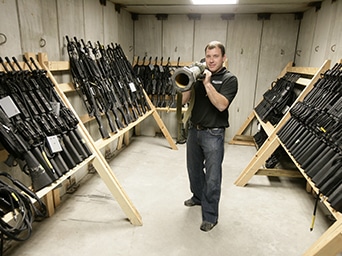 HUMAN SECURITY FOR GLOBAL SECURITY: Demilitarization is not a dirty word, nonviolence is not inaction, and building sustainable peace is not for the faint of heart

The political, social and economic changes we all face are serious.  Some might call the state of the world today chaos.  The ongoing, dramatic changes in technology and communications are other elements adding to uncertainty and the feelings of insecurity that people around the globe are confronting.  No one can predict the future but we can work hard to shape the outcomes.

Clearly there are huge obstacles to creating a world of sustainable peace with justice, equality and an end to impunity.  A world free of militarism, armaments and the arms trade in which human and other resources are focused on meeting the needs of humanity rather than fueling conflicts and war. A world of sustainable development that nurtures our planet instead of continuing to devastate the environment and threaten life on earth.  This will not happen over night.  But worrying about the future is not a strategy for shaping it.

My own work, beginning with protests against the Vietnam War, has been against weapons, war and militarism.  It is based on an understanding that sustainable peace is not simply the absence of armed conflict.  The absence of armed conflict provides the bare minimum for the possibility of constructing sustainable peace based on socio-economic justice and equality.  And to accomplish that we must change the understanding of security.

For centuries security has been defined as “national security” – which essentially has meant assuring the security of those in power and the apparatus of the state.  Defending the state requires military power based on nationalism and patriotism.  “Us” against “them.”  How else could armies be formed that send other people’s children off to fight battles for resources, territory and to project the power of the state?

Now, with globalization where all aspects of life are increasingly and more rapidly interconnected around the world, it is time to move away from state-centric security to security based on the individual – “human security” not “national security.”  The human security framework understands “security” as directing policies and resources toward meeting the basic needs of the majority of people on the planet:  providing decent housing, education, access to medical care, employment with dignity, protection of civil and human rights and governments that respond to the needs of citizens. It means creating a world where people live with freedom from want and freedom from fear.

One part of being able to create that world is reclaiming and reasserting the meaning of “world peace.”  It isn’t meditation, a rainbow with a dove flying over it, or singing peace songs.  Nonviolence is not inaction and building sustainable peace must be understood as hard work every single day.  We must all be active participants in change for the good.  It doesn’t matter what issues people choose to work on – it could be global warming, an end to militarism, an end to poverty, or HIV/Aids for example.

What matters is that we all work on issues we feel passionate about and that our actions are for the benefit of everyone.  By doing that our combined efforts enhance human security.  We also must talk about our work in the context of human security so that people become familiar with the concept and understand the various elements that contribute to promoting and protecting human security.

Another aspect of creating a world based on human security not national security is to tackle demilitarization and the glorification of violence head on.  It is an abomination that with the current global economic shake-down, countries still managed to find billions of dollars for weapons and the military while at the same time they are cutting funds for education, health care, job training, social services –the elements of daily life that are the basis of human security.

In order to promote the establishment and maintenance of international peace and security with the least diversion for armaments of the world’s human and economic resources, the Security Council shall be responsible for formulating…plans to be submitted to the members of the United Nations for the establishment of a system for the regulation of armaments.

Collectively, global civil society should begin actions to force the Security Council to “formulate plans” under Article 26 as soon as possible.  Knowing that they will do everything in their formidable power to continue to ignore those obligations, global civil society should draw up its own plans and recommendations for demilitarization and how to use the resources resulting from demilitarization to enhance global human security.  We can develop strategies and tactics around our plans and recommendations to pressure governments nationally, regionally and internationally to begin the process of demilitarization.

With demilitarization, the possibilities of positive change and human security in our world would be limitless. Humanity has the right to the real security of sustainable peace not the false “security” of militarism, armaments and war.