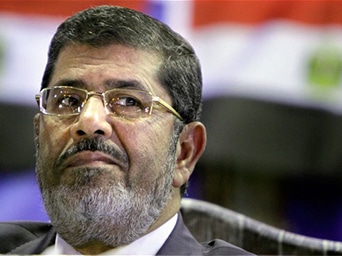 With Iran’s president demanding 9/11 truth and fighting off Mossad terrorism, and the democratic elements of Turkey’s leadership surviving such false flag terror plots as Sledgehammer and Ergenekon, will Egypt’s President Morsi join in an eventual regional alliance against Zionist-assisted false flag terror?

By firing some of Egypt’s leading Mossad-assisted false flag terrorists last Sunday, he may have taken a significant step in that According to Asia Times analyst Pepe Escobar, Egypt’s new president Mohammed Morsi has “started to move more boldly against the army after an attack by militants in Sinai that killed 16 border guards.”

To say that the Egyptian president is “moving boldly” is an understatement. Last Sunday, President Morsi fired the chiefs of Egypt’s navy, air force, and air defense forces, along with the defense minister and army chief of staff. All of the fired military leaders were closely associated with the defunct Mubarak regime.

In public, President Morsi claimed that he was firing the military officials for incompetence. Like John F. Kennedy in the wake of the Bay of Pigs fiasco, who used the failed operation’s “incompetence” as an excuse to fire CIA spook-meister Allan Dulles, Egypt’s president appears to have won his battle with the military on the battlefield of public opinion.

But like JFK, who did not tell the world the full truth about the CIA’s and military’s attempt to hoodwink him into invading Cuba, President Morsi may not yet be telling the whole truth about what really happened in Sinai and why he really fired his military leadership.

Egypt’s top military officials, especially those closest to Mubarak, were notorious for their collaboration with Israel’s Mossad in arranging false flag terror attacks designed to be blamed on “radical Muslims.” The attack in the Sinai, which killed sixteen Egyptian border guards, may have been such a false flag.

Whenever a spectacular, widely-reported terrorist attack occurs, the first question that must be asked is cui bono, or “who gains”? Israel’s Ha’aretz correspondent Akiva Eldar said of the Sinai attack: “The Israelis are in a way quite happy that the Egyptians have learnt their lesson, that they have to listen to us, and have had to pay the price.” In other words, the only party with anything obvious to gain from the Sinai attack was Israel, which wanted to punish Egypt for starting to open up its borders with Gaza.

While the attack was publicly attributed to Salafi jihadists, its extreme professionalism suggests that it must have had a state sponsor. As Dr. Ashraf Ezzat wrote in Veterans Today:

“What are the chances for two armed vehicles haphazardly storming the Israeli borders of surviving the attack, let alone achieve anything. Were the assailants not aware that they would be spotted on the Israelis’ radar the moment they crossed the line and stepped into the Israeli side of the borders? … Or were they assured otherwise?”

The Mubarak cronies running Egypt’s military were notorious for their collaboration with Israel in similar false flag operations. As I wrote in the immediate aftermath of the Egyptian Revolution:

“One of the biggest sparks that set off the Egyptian revolution was blacked out of the US media.

“That spark was widespread anger that Mubarak’s regime collaborated with the Israeli Mossad to bomb a Coptic church in Alexandria on New Years’ Eve – and blame it on Muslims. The whole Middle East saw right through it immediately, and the Egyptian people’s disgust was a big part of what led them to overthrow Mubarak.”

President Morsi is fortunate that the Egyptian people understand that Mubarak’s military and their Zionist friends were behind much of the “radical Islamic terrorism” that afflicted Egypt during the Mubarak era. The majority of the Egyptian people, unlike most Americans, understand false flag terrorism all too well, because they have suffered so much from it.

A Western poll taken in Egypt showed that 72% of Egyptians do not believe that al-Qaeda was responsible for the 9/11 attacks in America. In this, they are in complete agreement with Egypt’s leading public intellectual, Mohammed Heikal, who said in October 2001: “Bin Laden has been under surveillance for years: every telephone call was monitored and al-Qaeda has been penetrated by American intelligence, Pakistani intelligence, Saudi intelligence, Egyptian intelligence. They could not have kept secret an operation that required such a degree of organization and sophistication.”

President Morsi, for his part, may be following in the footsteps of Iran’s President Mahmoud Ahmadinejad by publicly opposing false flag terrorism and standing up for 9/11 truth. Like Ahmadinejad, Fidel Castro of Cuba, Hugo Chavez of Venezuela, and former Italian President Cossiga, Egypt’s new president has publicly stated that he does not believe the official story of 9/11.