Home Veterans Blasphemy in the Age of Ignorance 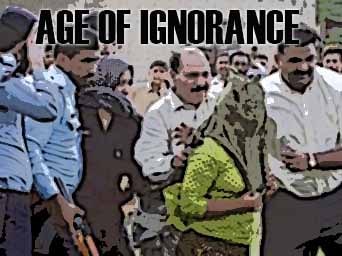 No, this essay has nothing to do with the film “Age of Innocence” (2007) but it has every thing to do with the Age of Ignorance that Muslims are living in and have lived in for a thousand years. If today’s leaders and clergy were in charge of Islam in its early days, Islam for sure would have died in infancy without ever spreading beyond Mecca and Medina.

I have to borrow the words of the late Justice Potter Stewart (1915-1985) when in Jacobellis vs. Ohio (1964) dealing with hard core pornography, he said” I know it when I see it” and so I too do not need do define “blasphemy” but I know it when I see it. And I do see it in the case of “Rishma” the 14 years old Pakistani Christian girl with a lower mental capacity falsely accused by a Muslim cleric of destroying and tearing not pages of the Holy Quran but pages from a book that teaches readings of the Holy Quran, a shameful blasphemy on the part of the nation and the Muslim clergy.

Of course in the Age of Ignorance in which Muslims live in, thousands of Pakistanis took to the streets seeking vengeance and calling for death of the young girl, but no one sought vengeance, from the Muslim cleric who falsely accused the girl. If the Pakistani people do believe in Sharia, then the Muslim cleric should be taken out whipped and lashed until his skin peals 7 times.

There is nothing more blasphemous in Islam these days than ignorance, illiteracy, poverty, injustice, hunger, lack of development, unfair distribution of wealth, lack of hope and opportunity, lack of centers of scientific research, learning and technology, poor and unfit housing, remote villages without roads, drinking water and electricity let along health clinics, certainly lack of any credible infrastructure serving the people and their future and advocacy of sectarian conflicts.This is real blasphemy.

There is nothing more blasphemous than the death and destruction we see in the Muslim worlds, carried for the most part by Muslims against Muslims and non-Muslims. Of course I do recognize the war being waged and lead by the US and Israel against Islam and Muslims in 7 nations all in the name of “war on terror”. But that does not justify the suicide bombings and booby trapped vehicles killing tens of thousands of innocent people in Iraq and in Syria, in Yemen, in Pakistan and Afghanistan and in Indonesia, in Mali and Nigeria, violent acts of vengeance and sectarian strife promoted and advocated by political leaders, Muslim clergy and Imams both Sunnis and Shiites.

Muslim clergy and for a long time since the early days of Muslim dynastic rules of the Umayyad, the clergy then and as now have always played a supporting if not legitimizing role for the political leadership which in turn rewarded the clergy with many privileges even wealth a “symbiotic relationship” at best.

With the exception of the late Mohammad Abduh (1849-1905) the Muslim jurist, religious scholars and liberal reformer (Wikipedia) Abduh is perhaps the lonely Muslim liberal theologian in the past few centuries.

Unlike theologians within the Christian church, mainly Catholic and mainly Central and Latin America, Islam did not experience the teaching of “liberation theology” as that taught by such clergymen as Peruvian priest Gustavo Gutierrez “Theology of Liberation”, and the Brazilian Leonard Boff, Jon Sobrina of El Salvador, Juan Luis Segundo of Uruguay, all became champion of Liberation Theology as a result of the poverty which they see resulting from social injustice, unjust economic conditions, un-just political an social conditions (Wikipedia) . Muslim clergymen always found ways to justify social injustice, poverty, misery, lack of basic services, unfair distribution of wealth as the “will of Allah” and who like the clergy of the early Christianity took the side of the political leadership advocating “obedience” to the ruler as part of the “faith”.

Even in Iran of the Shah, the Shiite clergy as a class was more interested in its privilege status and concerned with the lost of income than it was concern with freedoms, liberty, development and social justice. The late Ayatollah Khomeini rode the wave of social discontent and unfair distribution of wealth, to take charge of the masses and came back to rule and solidify the status of the “clergy” as a class, a class that is ruling Iran with an iron fist with chocking hold on every aspect of life in Iran. The “Mullahs” became the new aristocracy.

Sunni clergy and “Islamist” organizations such as Muslim Brotherhoods, Hizb Al-Tahrir did not rise calling for reforms, political freedom, liberations and advocacy of “liberation theology” but rose to have their shares of political powers, creating a “theocratic state” and in the case of Hizb Al-Tahrir a “dynastic Caliphate” and both failed to addressed social injustice and poverty and that such things are not the “will of Allah” but the failings of man kind and a failed corrupt political and economic system.

Today and sad to say, we see Muslim “clerics” leading the “sectarian” fights advocating vengeance, hate, killings and murder of others recruiting suicide bombers to bomb mosques, schools, and markets, with some even going further by anointing themselves the “guardian of virtues”, leading the fight against the rights of and equality of women, democracy, individual rights and freedom of speech and expression as we see today with the “salafis” in Tunisia, Egypt, Jordan, Palestine, Pakistan, Afghanistan, Mali, Somalia, Nigeria among many other places.

Today’s Muslim clergy are more concerns with “virtues”, social dress codes, sex, booze, arts, music, cinema, women driving than their concerns and advocacy with improvement of the quality of life for people, with freedom from hunger, freedom from ignorance and illiteracy, social justice, advancement of education and technology, accountability and transparency of governments and the rights of citizens to chose their own representative and the people as the source of political, economic and social powers.

With the kind of “clergy” we have among Sunnis and Shiites it is unlikely we will see enlightened well-educated truly intellectual clergy that are advocates of and promoters of Islamic Liberation Theology. For the most part, today’s Islamic clerics are the source of Age of Ignorance; a visit to your local mosque will confirm what I am saying.