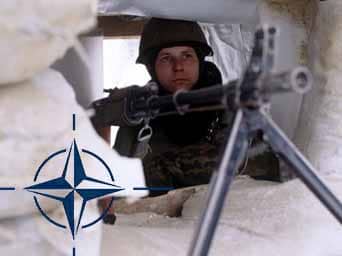 The North Atlantic Treaty Organization (NATO) is undertaking a dangerous and provocative global expansion that threatens the peace of the world, a distinguished Canadian geopolitical analyst Mahdi Darius Nazemroaya writes in a new book.

By the time NATO started its war on Libya in March, 2011, it was conducting operations in the Atlantic, Arctic and Indian oceans, the Mediterranean and Red seas, and the Gulf of Aden, as well as in countries on four continents that included Afghanistan, Iraq, Pakistan, Somalia, Sudan, and the former Yugoslavia, Nazemroaya says.

As part of these adventures, the U.S. and its NATO allies have lowered “a new iron curtain” from the Baltic to the Aegean “to castrate and contain the European core of Russia and its allies in Eastern Europe,” Nazemroaya writes. He points out that Sergey Markov, co-chair of the National Strategic Council of Russia, described the 2008 war between Georgia and South Ossetia as being, in effect, “a U.S. attack on Russia.”

However, “NATO expansion is not just limited to Europe, but is in pursuit of a worldwide capability to expand Washington’s empire under a global confederacy,” writes distinguished Canadian sociologist Nazemroaya in The Globalization of NATO(Clarity Press).

He warns the expansion will eventually lead “to East Asia and the borders of the Chinese where the U.S. has been waging a shadow war to box China in and checkmate it.”

“The U.S. and NATO have literally authorized themselves to go to war anywhere in the world,” Nazemroaya continues. The 2010 Strategic Concept of NATO, which was drafted by a committee chaired by Madeleine Albright and vice-chaired by former Royal Dutch Shell CEO Jeroen van der Veer, “also asserts the legitimacy of whatever actions NATO members take to secure energy sources as the U.S. and NATO look towards securing all the world’s energy hubs.”

Besides expanding its area of operations, since the end of the Cold War, NATO’s nuclear strike posture has become more aggressive. “Within NATO and among U.S. allies a consensus has long been established to legitimize and normalize the idea of using nuclear weapons in conventional wars,” Nazemroaya says. “This consensus also aims to pave the way for pre-emptive nuclear strikes against targets like Russia, China, and Iran.”

Most of the world’s countries, he points out, argue the U.S. and its NATO allies have violated Articles 1 and 2 of the Non-Proliferation Treaty (NPT), because the Pentagon has a NATO nuclear weapons sharing program. In addition, “Through its continued construction of nuclear weapons the United States is the chief violator of the NPT and the chief cause for the development of Russian and Chinese nuclear weapons,” Nazemroaya writes.

He observes that Russia, too, is re-arming itself with nuclear weapons and has the largest nuclear arsenal in the world because Moscow strongly believes its nukes “are what have stood in the way of U.S. attempts to pummel Russia.” What’s more, Russia has copied the adoption of the U.S./NATO pre-emptive nuclear attack doctrine.

He goes on to say, “Washington has made it categorically clear that it could attack Iran and North Korea with nukes.” Nazemroaya notes the Obama administration says it will not honor NPT’s provisions barring a nuclear attack on certain non-nuclear states, “meaning Iran and North Korea.” Obama says those two countries aren’t complying with the NPT.

“This was a fallacious claim,” Nazemroaya continues, as in the case of the Iranians, the IAEA “has repeatedly reported that it has not found any evidence that Tehran has a nuclear weapons program and is in breach of NPT.” And North Korea withdrew from the NPT in 2003.

Sherwood Ross is a publicist for the book, “The Globalization of NATO.” For further information, including purchase price: www.claritypress.com