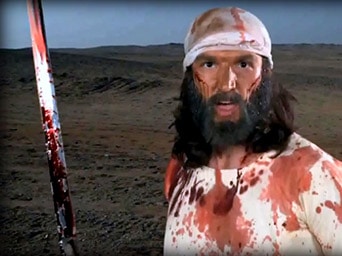 On the eleventh anniversary of 9/11, the American ambassador to Libya got killed; the Benghazi consulate set ablaze and moreover, the Al-Qaeda flag waved over the premises of the US embassy in Cairo as thousands of Muslims were outraged by a film, they say insulted their prophet.

The angry Muslim crowd, mainly Salafis and ultra- conservative traditionalists headed towards the compound of the American embassy, encircled the place with their rapidly growing numbers, scaled the walls of the Embassy and tore down the US flag (the stars and the stripes) and replaced it with the Islamic black banner of Al-Qaeda (inscribed with the Muslim profession of faith: There is no god but Allah and Muhammed is the true prophet of god) .. Watch the Video of the Egyptian protesters chanting “OBAMA, OBAMA … THERE IS STILL A MILLION OSAMA!

Earlier in the day, news of an American film that allegedly insulted prophet Muhammed was frantically floating the web especially after a 13- minute trailer was posted on YouTube.

And it wasn’t long before the alarming news that was broadcasting from Egyptian satellite TV channels crossed over to the Libyan side.

And while the situation in Egypt was all about a huge crowd of angry protesters surrounding the American embassy, the Libyan case- where the war on Gaddafi has left Libya as the biggest black market for heavy weaponry in North Africa- was completely different.

Having neither time nor any taste for useless rallies and meaningless protests a Libyan Muslim mob (equipped with a small arsenal of automatic weapons, and rocket-propelled grenades) simply took aim at the American consulate in Benghazi and bombarded the whole facility instantly setting it aflame. Some preliminary reports by American officials believe the attack was pre-planned.

Unfortunately, the American ambassador, Christopher Stevens, who was on a short visit to the consulate, was killed in the attack along with other three of the diplomatic staff.

Mr. Stevens, who was appointed as an ambassador to Libya in June 2012 died from inhaling the smoke that was filling up the blazing consulate.

At first, it has been said the the film “Innocence of Muslims” that triggered this widespread reaction was made by an Israeli filmmaker, promoted by a fanatic group of the Coptic expatriates in the US and was financed with the help of more than 100 Jewish donors.

Also, the film is backed by U.S. pastor Terry Jones, who inflamed anger in the Muslim world in 2010 with plans to burn the Koran

The film claims Muhammad was a fraud and that the Koran is but a funny cocktail of copied stories from the Torah and the New Testament mixed with some satanic verses. oh, how untrue!

Who is insulting whom and why

An English-language 13-minute trailer on YouTube shows an amateur cast performing a satirical dialogue of insults disguised as revelations about Muhammad, whose obedient followers are presented as a group of perverted (pedophilic) thugs.

The film depicts Muhammad as a clueless liar/delusional and a feckless promiscuous who approved of child sexual abuse, among other overtly insulting claims that have caused outrage.

Speaking by phone (as initially reported by the Associated Press) from an undisclosed location, writer and director Sam Bacile remained defiant, saying Islam is a cancer and that the 56-year-old intended his film to be a provocative political statement condemning the religion.

“This is a political movie,” said Bacile. “The U.S. lost a lot of money and a lot of people in wars in Iraq and Afghanistan, but we’re fighting with ideas.”

Bacile, the mystery man who liked to identify himself as an Israeli Jew, said he believed the movie would help (Israel) his native land by exposing Islam’s flaws to the world.

“Islam is a cancer, period,” he said repeatedly

With these violent protests over the Muhammed film, this year’s 9/11 anniversary comes amid an atmosphere of MidEast demagoguery (most, if not all, of the Muslim protesters did not watch the film nor the trailer) nevertheless, they took part in the violent protests.

… And that will give you an idea how easy it is to mobilize thousands of Muslims anywhere on earth in a matter of seconds and have them commit the unthinkable. The trigger plot is so simple, all one has to do is to (insult Muhammed, the prophet of Islam). It is so easy and result guaranteed it could turn out to be a very convenient tool for any agent provocateurs.

Ironically, in Egypt, the Muhammed film is not linked with the Israeli director as much it is with the Coptic community in the United States, for a Christian activist involved in the film project said that Bacile was a pseudonym, that he was not Jewish or Israeli, and that a group of Americans of Mideast origin collaborated on the film.

Actually a late update by the (Christian Science Monitor) tends to believe that the film doesn’t exist and that the 14-minute audio-edited trailer is all there is to it.

So much of the anger is coming down on the Coptic community in Egypt whose members, already suffering from discrimination, will have to live with the long-run consequences of the sedition this irresponsible film has created.

And actually those who made the film and financed it are no fools, they knew what they were doing and they surely saw this catastrophic response coming. Even more, they begged for it to happen .. and may be in that same sequence; first, with Israel suspected of the wrongdoing and then somehow acquitted of all accusations shortly after.

This whole thing was no coincidence; 9/11 (the international day that supposedly marks Islamic fanaticism/terrorism)was not haphazardly chosen for posting the film trailer on YouTube, and terry Jones and the American Coptic leaders were not infuriating the Muslim sentiments in Egypt for nothing.

This whole (insult Muhammed) stunt was supposedly leading to one thing; inflaming the sectarian tension between Muslims and Christians in Egypt.

This film, directed and produced by a bunch of Israel-loving Zionists, including Coptic expatriates, was not after an Oscar, the film is artistically amateurish, but it was aiming to damage/and deteriorate an already vulnerable sectarian situation in Egypt.

Following the “divide and conquer concept” the Israeli side knows damn well that if Egypt, the only Arab nation that is still unbending before the Zionist project of a new Middle East, is to be defeated and balkanized, It will not be achievable by the might of the military power but by the perils of the sectarian war.

Hit the national unity between the Muslims and Copts (Egypt Christians) and it won’t be long before Egypt would turn into another Iraq or Syria.

And if that what was on the mind of the film’s makers, financers and promoters then yes, the film would absolutely help Israel as Mr. Bacile/or Basseley Nakoula for that matter, mentioned before.

Besides it wouldn’t have come at a better time, as the US presidential elections are drawing near to teach Mr. Obama a lesson; not to side with the Arab Muslims again and to know better than to snub Bibi.