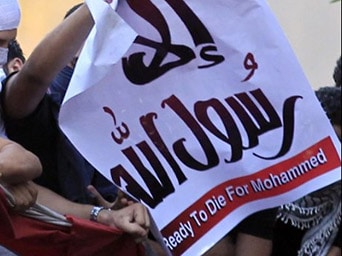 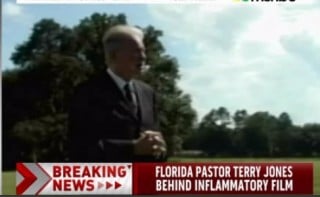 Recent reports tying Coptic Christians to the “film” which was never the issue in the Middle East upheaval is an attempt by the same forces responsible for the Alexandria church bombings to bring about civil war between Christians and Muslims in Egypt.

That bombing was traced to the Mossad.

Investigations by me, published yesterday on Press TV’s website, cited “Reverand” and “Doctor” Terry Jones as the source of the videos cited for instigating violence across the Middle East.

Our investigation into Jones past showed him to be a trained CIA asset with direct ties to the Mossad. He served in Germany for years as an organizer for the CIA under the highly secret “Gladio” program until expelled by the German government.  You can be a CIA agent, even a terrorist bomber but in Germany, if you buy a mail order PhD, it is a crime.  “Dr.” Terry Jones would have been better off had he called himself “Agent” Terry Jones.

VT offers its heartfelt condolences to the family of Ambassador Stevens and the families of the other Americans lost in Libya.

Here is an MSNBC clip covering their “day late” discovery of Jones at the heart of what is a conspiracy, not only to cause unrest but as a cover for assassinations of US diplomats by highly trained special operations teams.

The network news has been told to find a way to blame “Al Qaeda” on the killings at the embassy in Libya.  It has now become an accepted fact that the demonstrations were orchestrated to cover the murders.

The video below is part of the streaming broadcast which includes scenes that are illegal to show, thus is only a short representation.

First of all as to the “film” or whatever.  As news managed to get past the “controllers,” it became obvious that the “Israeli” director never existed and the film had been financed by a group out of Las Vegas in the casino business tied directly to the Romney campaign.

This we know.  You will see no reporting of this although the security around those funding the film and the quick “pounce” Romney made on Obama are enough to spark curiosity, if such a thing existed.

I am not willing to name Sheldon Adelson as the person who financed the film.  Someone should ask him, however.

Normally, by now, we would have SITE Intelligence, the Mossad operation that takes credit in the name of invented terror organizations dig up a mysterious website taking credit.

(UPDATE) Below, dated 9/12/2012 at 11:35 PM we received the confirmation of the cover story.  This time it was CNN as the fall guy, someone had to be stupid enough to get suckered into pulling out the “Al Qaeda did it” ruse.  However, as their time stamp is on the article, what applies now is “caught in the act.”  Below is the VT date stamp predicting the Al Qaeda story, by 6 hours and 13 minutes exactly:

We expected SITE Intelligence to fall for it but, instead, CNN has chosen to take part in the providing “cover and deception” for the attacks:

The reason that hasn’t happened is that the mainstream news went from “the evil Muslim mobs did it” to “it was a conspiracy” quicker than expected.  Give them a day and they will come up with what has been asked of them.  That?

A phony website is, in all probability, being prepared to announce that the attack in Libya and the special operations aspect of the killings of the American diplomats was done by “highly trained jihadists.”

I hope this announcement in advance doesn’t interfere with their efforts.

ON THE GROUND IN LIBYA

Actual intelligence sources in Libya have told us the following:

“The killings of the diplomats were done under the cover of the riots which had been orchestrated in advance over a series of days.

Four color printed placards were ready to distribute prior to the Jones “stream-cast” and groups had been warned in advance to prepare for a “serious foreign threat.”

The actual killings are said to have been done by a team of newly trained Special Forces from the United Arab Emirates working directly in conjunction with the Mossad.

Crowds were being managed by French DGSE agents, seen by the dozen, and British security service personnel were present but their role was not clear.

What is clear is that this was a carefully planned operation, orchestrating civil protests in order to facilitate the killing of American diplomats.”

The reasons for the entire operation are several.  Two in particular are mentioned by analysts who actually observed some of the advance planning in both Egypt and Libya.

There are more than two, however.

As more information comes available and we are able to provide additional verifications, all printed above carries “double” verification already, we will keep our readers informed.