Home Life Obama to Appear at Comedy Show Instead of Meeting Netanyahu: Reports 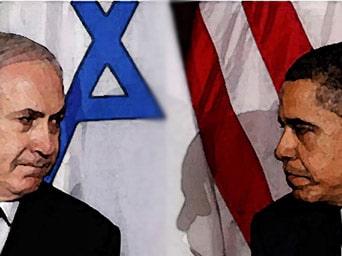 Obama to appear at comedy show instead of meeting Netanyahu: Reports

US President Barack Obama will appear on a late night comedy show during a September 18 visit to New York at the same time he could have met Israeli premier, reports say.
Reports, by Israeli media outlets, of Obama’s presence in David Letterman’s comedy show, instead of meeting Israeli Prime Minister Benjamin Netanyahu come amid mounting tensions between the two allies over setting “red lines” by Washington on Iran’s nuclear energy program, a request the US has rejected.

On Tuesday the Israeli embassy in Washington announced that the Obama administration had rejected a request by Netanyahu’s office for a meeting with the American president when the Israeli premier attends the UN General Assembly later this month.

The Obama administration, meanwhile, has confirmed that Obama will not meet Netanyahu, saying the decision was made due to a scheduling problem and had been communicated to Israeli officials long ago.
Additionally, the White House tried to avert a controversy over the request for a meeting a few weeks before the US presidential elections by saying that after a New York meeting between the two was ruled out, the Israeli side did not request a meeting in Washington.
“Contrary to reports in the press, there was never a request for Prime Minister Netanyahu to meet with President Obama in Washington, nor was a request for a meeting ever denied,” said a White House statement.
In yet another apparent attempt to avoid controversy on the issue, press reports in the US have also quoted an unidentified Obama administration official as saying that the American president will only spend one night in New York and does not plan to meet with any foreign leaders at the UN session.
Meanwhile, White House officials have also described the recent public criticism by Netanyahu against the US government’s refusal to set “clear red lines” on Iran’s nuclear energy program as ‘another in a series of Netanyahu provocations’ intended to affect the upcoming US presidential election campaign.