Home Economy The inmates are in charge of the asylum 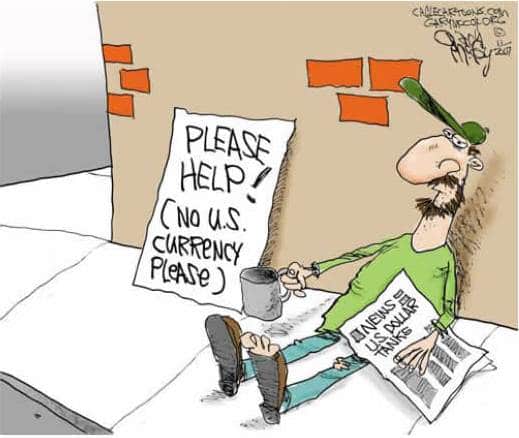 Let me get the facts straight about the status quo of American left thinking. It will be a real stretch because I consider myself conservative (somewhere to the right of Attila the Hun), spent time in many of the countries leftists point to as being better than the US, lived in Eastern Europe for a brief period, and married into a family raised under the Communist Party.

We have reached a point in the history of the United States where we have the insane running the asylum; the blind driving our economic vehicle toward the cliff; the deaf failing to hear the global warnings of the inevitable collapse of our monetary system; and sideline chants, “GO BABY GO”, from a complicit mainstream media and young voters who have yet to understand the first things about life… wet behind the ears.

They don’t mean the same party that fought against the Equal Rights Amendment (granting equal rights to all regardless of racial, ethnic, national and religious minorities and women), spearheaded by such notable Democrats as Strom Thurman, Robert (KKK) Byrd, Richard Russell, and legislators from 18 other states saying, “We will resist to the bitter end any measure or any movement which would have a tendency to bring about social equality and intermingling and amalgamation of the races in our (Southern) states”. To set the record straight, the Equal Rights Amendment received overwhelming support from Republicans and was opposed by most northern Democrats, who aligned themselves with the anti-ERA labor unions (the ERA was supported by southern Democrats and almost all Republicans).

It’s the Democrats who appear to really hate women…Democratic senators such as Barbara Mikulski, Patty Murray, Debbie Stabenow, Dianne Feinstein, and Barbara Boxer all “pay their female staff members significantly less than male staffers.”  How much less? How about 35.2% less?  Democrats, meanwhile, say that nationwide the gap is 23%.

So much for the BS the democrats are spreading about a “war of women”. But anyone with an IQ above that of a monkey (no disrespect of our primate friends), one just has to look around.

AT AGE 30 MS. FLUKE, IT’S TIME TO GROW UP. I for one, and I imagine the majority of all taxpayers, do not want to pay for your lifestyle, your birth control pills, your abortions, your college education, and all the handouts you seem to expect us to pay for. We had to work for what we have…’bout time you did the same!

The party which has stymied passing a federal budget since April 29, 2009 (that’s almost 1200 days) is the party of continuing resolutions and trillion dollar deficits that is leading the charge of a four-year escalation in food and energy prices pushing us into a coming inflationary spiral that will be a slap in the face to all women trying to balance their family budgets with devalued currency.

Not let’s add the following facts the left seems willing to ignore:

Note: It should be noted that established contract law required secured creditors be paid first, but Obama’s administration simply ignored this legal requirement and gave the unsecured union creditors first position – leaving the crumbs for the secured investors.

Common-share stock holders were completely wiped out, when GM emerged from bankruptcy, all shares in the “old” GM were worthless since the “old” GM didn’t exist anymore. Those of us holding GM stock at the time were completely screwed with no recourse! By the way…As of the 2011 4th quarter, the New GM has made no further TARP loan repayments.

Let’s jump to the Federal Reserve to talk further about the insane running the asylum, only this bit of information isprobably more akin to the alcoholics minding the liquor store.  We do know that no one individual apparently controls the FED as Ron Paul has been saying for years; they have operated outside the oversight of Congress, refused to disclose details into their operation, and have refused Congressional audit. The FED functions as a shadow government controlling our nation’s money. However one good thing about the Dodd-Frank Bill is the first ever GAO (Government Accountability Office) audit of the Federal Reserve. Though not complete, it was carried out in the past few months due to the Ron Paul and Alan Grayson Amendment and it is shocking. This alone should bounce the current administration right out of Washington!

It was President Kennedy, who first voiced concern about the corruption of our Federal Reserve Bank and the non-control of the “Secret Society”. Yes, it has been forever that Congress has been stonewalled into complacency about the Fed, and were it not for the tenacity of Ron Paul and a handful of others, we would never see just how corrupt the Fed really is, and why Jefferson’s words ring true. “Government corrupts and absolute government corrupts absolutely”.

The blame does not rest totally on Obama’s shoulders as there is blame to be laid on the doorstep of every administration which has ruled the roost, but now that we are seeing what has been going on, we must clean house and fortunately for we current taxpayers who are getting our eyes gouged out, we must start with the Obama administration. He’s the one currently in the driver’s seat.

Ben Bernanke, Alan Greenspan, and various other bankers vehemently opposed the audit and lied to Congress about the effects an audit would have on markets. Nevertheless, the results of the first audit in the Federal Reserve’s nearly 100 year history were posted on Senator Bernie Sander’s webpage recently. What was revealed was startling:

“Americans should be swelled with anger and outrage at the abysmal state of affairs when an unelected group of bankers can create money out of thin air and give it out to mega-banks and super-corporations like Halloween candy. If the Federal Reserve and the bankers who control it believe that they can continue to devalue the savings of Americans and continue to destroy the US economy, they will have to face the realization that their trillion dollar printing presses will eventually plunder the world economy”. (Sott Net…Sign of The Times by historian and author of repute in her own right, Laura Knight-Jadczyk)

Most notable on the list of institutions that received the most money from the Federal Reserve can be found on page 131 of the GAO Audit and are as follows:

In closing, to show how absolutely bazaar and insane the country has become, nothing says it better than the story on the news the other night. It was enough to make the dead scream in outrage,

Robert Kosilek , a convicted murderer was sentenced to life in prison in 1990. His story has to be the coup de gras. The taxpayers of Massachusetts have been footing the bill for hormone treatments for this “slug” who now goes by the name of Michelle Kosilek. As usual the line-up of psycho “experts” have labeled Robert’s disorder a “serious medical need.” The diagnosis now has its own classification as “Gender Identity Disease”. Is there anything liberals can’t define as a disease???? Let me help them out here…Cancer in a disease. Multiple Sclerosis in a disease. ALS in a disease. AIDS is a disease. This crap is not a disease. It is just another example how society has gone off the deep-end. Oh yes…the best part of this story is that a judge says the Massachusetts taxpayer has to pay for it.

What’s next for the citizens of Massachusetts? Liposuction for the overweight inmates; breast implants to help the self-esteem of flat-chested women who are incarcerated; artificial insemination for the female inmates who might miss child-birth years because they have been imprisoned; penis enlargement for jailed inmates who feel a little inadequate (easily attributed to a “self-esteem disease” leading to aggressive behavior that got them into jail in the first place)? Hey Massachusetts… Alexis de Toqueville has been cited for the quotation, “In a democracy you get the kind of government you deserve”. Please yell out when you finally have enough.