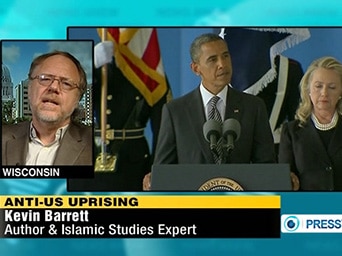 [watch the video, which also features VT editor Gordon Duff, at the Press TV website]
A political analyst says that an anti-Islam film made in the US is a false-flag operation, led by the Zionist entity and its supporters, Press TV reports.

Press TV has conducted an interview with author and Islamic Studies expert Kevin Barrett to discuss a recent movie made in the US denigrating Prophet Muhammad (PBUH).

Outrage has spread across much of the Muslim world following the release of the trailer of the anti-Islam film made in the US.

Protests condemning the blasphemous film have been held in many different countries including Iran, Sudan, Egypt, Yemen, Tunisia, Australia, Afghanistan, Pakistan, and Malaysia.

Press TV: Your take on the many different perspectives on the discussions out there, in looking at the reasons behind this. How likely is one of the causes to try to cause division between the religions, which actually there are no divisions in a violent way, of course, between a Muslim, or a Christian, or a Jew. How likely is that? Because as Don has said that he mentioned the billboards in New York. You can only think that that’s going to add fuel to the fire and get people over there enraged and then have the Muslim world already outraged. So, your take on that?

Barrett: Yes, I think Don is exactly correct when he said that there appears to be some kind of coordinated media effort slandering Islam. I think that was the understatement of the 21st century. There has been a coordinated media campaign slandering Islam ever since the three World Trade skyscrapers were blown up on live television, a snuff film featuring the murder of 3,000 unwitting extras designed to whip up the whole planet into an anti-Muslim hysteria and it hasn’t stopped ever since.

This campaign [coordinated media campaign against Islam] is orchestrated by a combination of intelligence agencies and the people who control the Western mainstream media. And their goal, I think, is twofold. Some of them are strategists who believe that the US long-term imperial strategy requires strong mobilization during this period of China’s rise and they wanted to double the military budget and take an aggressive posture all over the world, add many military bases all over the world, etc.

But I think the stronger force behind this gigantic coordinated media effort to slander and smear Islam and murder millions of Muslims around the world is the Zionist entity and its supporters.

These people are very very tight with the top level of global organized crime, as I’m sure, Gordon Duff will explain in a moment, and they are dedicated to using the full power of the United States to smash the enemies of Israel. It’s a combination between these two  forces, these extreme militarists and aggressors in the US strategic complex and the Zionists who are so tight with global organized crime.

We’re really up against a monster and it leaves Muslims in a tough position, because as you said Islam, Christianity, Judaism, Hinduism, Buddhism, all the great religions are really ultimately telling the same truth in different languages and should be on the same wave-length and actually uniting to fight off the wave of the anti-religious feeling that’s been promulgated by various forces for the past 200 years. But instead we are being set at each other’s throats by this divide and conquer strategy full of false flag operations and intelligence operations.

I’m sure that Gordan Duff will happy to tell you that this latest episode, this horrible film, is a false flag operation.

Press TV: What’s your take on what Don Debar has said?

Barrett: Actually, I guess I lean a little bit towards Gordon’s position over Don’s here.

I think that if this is a false flag operation designed to influence the course of world events,  it’s part of this larger strategy of tension, which as I said, is a hard-line Zionist strategy from the 9/11 attacks onward, to create a war between Islam and the West. Why would they want to bring this to a boil now?

Well, as we all know, [Israeli] Prime Minister Netanyahu is just dying to start a war with Iran and he thinks that the only chance he’ll have is if either he can do it before the election and force [US President Barack] Obama to go along with it, or if Obama can be defeated in the election, then the Romney administration would probably be willing to go along with it.

So, that’s really the overriding foreign policy crisis at this moment and I think that the ramping up tensions in the strategy of tension by spreading this ridiculous film all over the world with tremendous amounts of money and expertise behind the transmission of it is designed to reinforce the narrative of a crisis between Islam and the West and I think this is part of Netanyahu’s efforts.