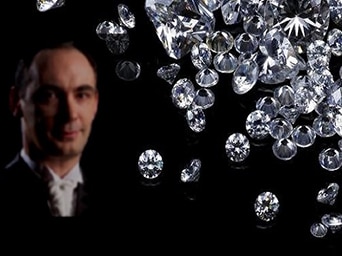 WORLD NEWS TOMORROW –RUSSIA – Breaking News –Russia  announced that an Russian asteroid crater revealed to be filled with over $1 quadrillion of diamonds. This comes after South Africa has lost its grip to maintain their image as the world’s “Holy Grail”  in diamond producing in the last year.

According to some, this was top secret by the Soviet Union’s most valuable cold war secret agency, the KGB. This past weekend, Russia declassified the existence of what could very well be the richest diamond field in existence, located in the depths of a 62-mile diameter asteroid crater known as Popigai Astroblem in Siberia.  Baron Baretzky one of the world’s leading Global Security threat analyst, also a pioneer in the combating of crime on  “Blood Diamonds” and diamonds for arms trade commented that this will certainly have several ramifications.
He explained that there are  two reasons for this. The first is that the demand for diamonds are increasing in the global markets with China being the largest consumer and second the illegal Arms trade is parallel increasing in the global Blood Diamonds trade.

This, he explained, with Russia adding a quadrillion to their financial capital values, will influence both outcomes in the future. He said, the good news is, that the demand for Blood diamonds will decrease if more production fills the markets from Russia and the second is that the market values could simultaneously be influenced and possibly manipulated, he added. Bn. Baretzky said that it would certainly put Russia in the world’s top powerhouse for the next 1000 years to come and it would be interesting to see how other powers that be, would handle this new position of Russia ? Even more so, he said, should Russia decide to control the world’s financial markets by flooding the markets  with lower diamond prices to break into the markets.

The diamonds found in the Popigai Astroblem are known as “impact diamonds.” They’re created when a meteor strikes a graphite deposit, as happened there an estimated 35 million years ago according to scientists. Impact diamonds are significantly harder than normal diamonds, and are best suited for industrial or scientific use according to reports. Baron Baretzky said this to be true to an certain extend, but also misleading to the another, as certain diamonds could be 10.26 on the Moh scale but more likely of higher gem quality if this is the case.

Even though Gem quality diamonds can sell for $1,000 per carat with unusually large diamonds going for as much as $150 million, such as the Pink 102 ct diamond sold last year to an Arab Banker, the a discovery of such amount of diamonds could have a huge impact on several industries such as the scientific, space research and military research projects of Russia. Bn.Baretzky warned that this could be a false flag as Russia is presently developing new strategies to stay the world largest producer of diamonds.

Seemingly, some said that a diamond discovery of this magnitude is almost sure to have a serious downward impact on diamond prices. Bn. Baretzky disagreed and said that the official records indicates that prices is more likely to increase and being manipulated should the “Powerhouse”  shift to Russia. He also said this is pending should the information release of such information and what he calls ” a magical crater”  be correct and not an attempt to scare the global powers during the Syrian epidemic.

He commented that only time will but one thing is certain that it would result in a struggle perhaps larger as the one for oil since science is only beginning to understand the use of Diamonds in space research.  Diamonds are a girl’s best friend and here to stay forever it seems.