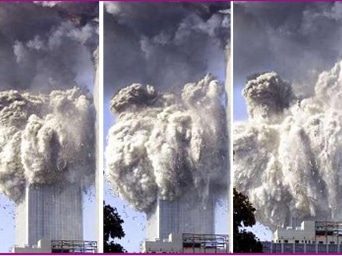 911 Dust : An Original Essay by Jeff Prager with new, never before seen references, specifically references 10, 11 and especially 12. Without question, no one has seen #12.

In order to cause concrete and steel to turn to micron-sized dust particles at Ground Zero as presented by Dr. Thomas Cahill, UC Davis Delta Group, the speed of sound must be reached in those items. Dr. Cahill is one of the world’s premier atmospheric physicists.

The speed of sound for concrete is 3200-3600mps (meters per second) and for steel the speed of sound is 6100mps.[1] Based on statements by Dr. Stephen Jones he estimates the velocity for his aluminum and iron oxide energetic compound in a silica substrate at 300mps.

We know that the energetic compound allegedly found by Dr. Jones did not have a copper component.

This energetic compound allegedly found by Dr. Jones is incapable of turning either steel or concrete into the micron sized particles found by Dr. Cahill.

Dr. Cahill set up his sophisticated atmospheric monitoring system on a rooftop adjacent to Ground Zero on or about October of 2001 and took air samples for close to 30 days.

To vaporize or boil soil and glass rather extraordinary temperatures must be reached and maintained. A fire of this magnitude must have something feeding it oxygen.

Underground fires, whether fed by nanothermite or other incendiaries, require oxygen. There is only ONE source of igniting and maintaining a fire without a constant feed of oxygen.

In 2011 Dr. Neils Harrit was asked in an email by T. Mark Hightower (and several others included in that email) to estimate the amount of Dr. Jones’ energetic compound that would be required to take the Twin Towers down.

Using the low figure of 29,000 metric tons and assuming a single one-ton crate could be moved from a tractor trailer backed up to a loading dock in the basement area of the towers to its final destination within the towers every 15 minutes it would have required approximately 300 days, working 24/7, just to load the building.

Working in 8 hour day shifts it would have taken almost 3 years.

It would also have required, based on standard freight weights, over 1,500 tractor trailer loads delivered to each tower.

This is a preposterous and patently absurd scenario.

The rate of Multiple Myeloma, a very rare blood plasma cancer, across the general population is 3.0-9.0 per 100,000 people.

Based on a CDC report (see: CDC K25 Workers)[5] we do not know what causes Multiple Myeloma.

We do know that even the most minimal exposure to radioactivity causes a measurable increase in the incidence of Multiple Myeloma.

As of March 1st, 2011, the rate of Multiple Myeloma and death among Ground Zero First Responders was 18 per 100,000 with all of those afflicted being between the ages of 37 and 60.

Reggie Hillaire, a Ground Zero First Responder, was able to beat thyroid cancer only to contract Multiple Myeloma in late 2011.

Some First Responders have succumbed to not one, not two, but in some cases three rare cancers.

The cancer incidence among Ground Zero First Responders, while un-addressed in the mainstream media, is epidemic.

The incidence of Thyroid cancer, brain cancer, pancreatic cancer and many other cancers is significantly elevated among Ground Zero First Responders.

We have only seen rapid onset cancers in those people exposed to radiation at Hiroshima, Nagasaki and Chernobyl.[7]

It should be noted that cancers were just recently covered by the US government for Ground Zero First Responders.

In mid-2012 I discussed my findings re: USGS report #01-0429 and the analysis of that reports Chemistry Table 1 which I published [9] to the CDC/NIOSH web site and the internet at large, with Dr. Christopher Busby.

Dr. Busby is a director of Green Audit Limited, a private company, and scientific advisor to the Low Level Radiation Campaign (LLRC).

He is also a visiting professor at the University of Ulster and was the National Speaker on Science and Technology for the Green Party of England and Wales. Dr. Busby is respected worldwide.

That analysis[9], while wholly inadequate in explaining fully what occurred on 911, was, nevertheless, accurate in many cases as Dr. Busby points out. Yet Dr. Busby goes further and explains that he’s found similar elements at similarly high levels in craters in Fallujah, Iraq and other war torn areas of the globe.

Dr. Busby then offers an opinion as to what may have caused these anomalous levels of the elements in the various dust samples from Fallujah, Iraq, Ground Zero, NYC and other areas across the globe.

I have briefly examined the paper presenting an argument on the basis of “trace element” concentrations in dust and on girder residues from the WTC that the buildings that they were destroyed by nuclear fission.

The arguments are incorrect for a number of reasons. However, the evidence is interesting and I will briefly discuss the issues.

OK let’s move on to what could have happened based on my deconstruction of the data from the war zones:

My conclusions and assertions are as follows:

Why Use Nuclear Weapons?

Nuclear weapons, 4th generation or even more advanced weapons, are ideal because they are extremely small with very predictable profiles. After decades of underground nuclear testing this science has been refined to an extraordinary level of competence.

With nano-technology the various control systems necessary to a nuclear device are infinitesimally smaller than those we’re familiar with from the 1960s.

Advanced nuclear grenades, nuclear weapons the size of apples or grapefruits as Dr. Busby states, are the most secretive technological advancement in real world weapons systems. Nuclear devices as described herein were the only possible way to destroy the buildings without having enormous chunks of building debris fly all over NYC and smash down on dozens of surrounding buildings.

Theses enormous structures had to be turned to dust. Destruction was kept to a minimum although overall it was still quite devastating. It could have been monumentally worse had standard explosives been used:

The velocity of thermite is far too low yet the velocity of standard explosives is extraordinarily high and the total destruction would have been inconceivable.

Nuclear demolition – turns most of the structure to a fine dust in less than 600 milliseconds, micron sized particles, which could be and were then, carried away by the prevailing winds. The remaining dust settled across New York City and beyond with small portions of the remaining structure piling up in cratered areas of Ground Zero.[10][11][12]

Velocities achieved by a nuclear explosion would be rapidly exceeded by the molecular dissociation caused by the brief but very intense heat. Some structure would be ejected, as we saw, but far less than with conventional explosives.

Nuclear energy is the only type of demolition that carries the total energy budget required to turn 100s of 1000s of tons of material to micron sized very fine particles. While much of the towers were recovered, a substantial portion of the buildings can be seen in dozens of images of both dense pyroclastic clouds emanating from Ground Zero and spreading across the city and the enormous atmospheric clouds swept across the state and out to sea by the prevailing winds.

3. Has Nanothermite Been Oversold To The 911 Truth Community by T. Mark Hightower: http://www.checktheevidence.com/pdf/NanoCompletePaper_final110501.pdf

4. Nanothermite: If It Doesn’t Fit You Must Acquit, Veterans Today: http://www.veteranstoday.com/2011/08/27/nanothermite-if-it-doesnt-fit-you-must-acquit/