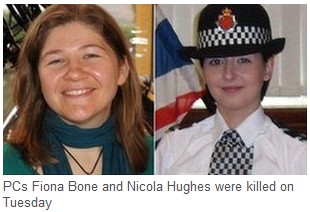 The outrageous murder of two unarmed women police officers, Fiona Bone and Nicola Hughes, in Manchester has renewed the debate in Britain on capital punishment.  There are also calls for police officers to be armed, which will go nowhere.

Our tradition in Britain, supported by the police themselves as much as anybody, is for the police to go unarmed.  It is highly unlikely that either of the two officers would have drawn their weapons in this incident.   They were ambushed and had no opportunity to defend themselves.

British police officers, famously, are even more reluctant to draw their guns, when they have them, than the LAPD.  There have only been a couple of bad shoots in the last 50 years.  I do not include the taking out of the Brazilian terrorist de Menezes in that number.  That was clearly a clean kill.

Philip Johnstone, in an article in the Daily Telegraph typified the lack of intellectual rigour in the arguments against bringing back the death penalty.   Philip’s a nice chap, but he hadn’t thought it through.  His objections were twofold – Parliament has ruled it out on several occasions since abolition in 1965, and it would breach Protocol 6 of the European Convention on Human Rights.

The problem in the House of Commons has been that wet party leaders have wimped out and made it a conscience issue.  It isn’t, unless you’re a Buddhist.   It’s a policy issue.  Murders in Britain have gone up fivefold since we started to water down the penalty in 1957.  Encouraging murder with soft sentences is wrong.  Parliament got it wrong.  It doesn’t have to keep repeating old mistakes.   As for the Sixth Protocol, we just denounce it.

Sadly two conscientious young women officers lost their lives, thanks to the insane policy of having light sentences for murder.  I have suggested to a member of the Cabinet that we push for a referendum, giving the Lib Dems the option of arguing against hanging in a referendum.  Naturally we Tories would expect the Lib Dems to encourage violent crime!

Of course the left would accuse the government of a kneejerk reaction.  They would like to see the Coalition confine itself to fine words, unaccompanied by action.  There are always those who will say that supporters of capital punishment are seeking to take political advantage of a particularly heinous crime by alighting on a particularly bad murder.   The political reality, sadly, is that it takes a savage murder or murders to concentrate minds.  I do not wish to see these fine young lives wasted and I support the calls already made by at least one family member for the restoration of capital punishment.  Of course we would only hang murderers in the nicest possible way.

You guys have got this one right.  The murder rate in some states fell by half after executions resumed.

The problem, which no police force in Britain has picked up, is that organized crime is not organized by criminals, but by hostile states.  This was spotted first in America, when J Edgar Hoover realized that the Mafia were connected to Mussolini’s intelligence service.  The great J Edgar also appears to have grasped that the Abwehr were behind the kidnap of the Lindbergh baby, which indeed they were (Bruno Hauptmann was a German agent).

The principal intelligence agency controlling major crime in Britain is Germany’s GO2, which is a sister agency of the DVD.  They have good Serbian connections and probably arranged for the hand grenades via Belgrade.   They have also penetrated most of our police forces, usually via drugs squads and Special Branches.   They are currently targeting the right-wing, anti-Islamic English Defence League, following a similar policy to the DVD in Norway, who ordered their man Breivik to pretend to be right-wing (he has no known association to any right-wing group in Norway).

It came as no surprise to me to hear that one of the alleged co-conspirators is being linked to the EDL.  I would be very surprised if any police video of an EDL demonstration showing him were produced.   The EDL are not known for their intellectual incisiveness and will probably take the propaganda hit, a bit like the poor old Russian Government on the Litvinenko death (so far as I know they are not even represented at the inquest, which has started this week).

The alleged cop-killer is an Irish Citizen.  If convicted (a matter entirely for the jury) we are going to have to review the Common Travel Area.  At the moment citizens of Eire are not subject to immigration control.  That may have to change.   We will need passport control with Eire when we withdraw from the EU anyway, assuming the Irish do not come out with us.

No one in England is terribly surprised that the wheels are coming off the Romney campaign.  A centrist flip-flopper, he was always going to be a weak candidate.  Sadly the Republicans fell for that old canard about elections being decided by floating voters, i.e. in the middle ground.  If you stand in the middle of the road, you risk getting run over.

I see even Governor Pawlenty has jumped ship and decided to become a lobbyist, a wise career move if I may say so.  I am surprised his careers adviser at college didn’t suggest it.

Whether President Obama serves out a second term is another matter of course.   The truth about his birth in Kenya is bound to come out sooner or later.  It’s an open secret in Nairobi.  There is no particular reason why Nairobi should be a better-informed capital than Washington.