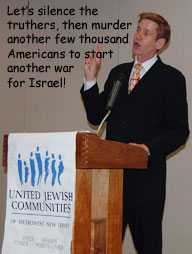 Clausewitz famously said that war is “politics by other means.” Today, mass-murdering Americans in false-flag attacks to start wars against Israel’s enemies is “Near East Policy by Other Means.” This treasonous “policy” is being openly and shamelessly advocated by the pro-Israel think tank WINEP, the Washington Institute for Near East Policy.

Last night, I helped break the story that WINEP representative Patrick Clawson has openly called for the mass murder of Americans in a false-flag attack to launch a war on Iran. (Watch the video – it must be seen to be believed.)

Today, it has emerged that WINEP is also behind a recent Washington Post op-ed calling for 9/11 truthers, like Egyptian president Mohamed Morsi, to be silenced.

According to Clawson, false-flag attacks and other orchestrated war-trigger events in which hundreds or thousands of Americans are murdered are “the traditional way [that] America gets to war is what would be best for US interests.” He pointed out that when US presidents want to go to war, they “have to wait for” incidents like the staged murder of sailors on the USS Maine, the orchestrated slaughter of the passengers on the Lusitania, the Pearl Harbor attack set up by Roosevelt’s eight-point-plan, and the hoaxed Gulf of Tonkin incident. (He started to mention Israel’s murder of American sailors on the USS Liberty, but caught himself in time.)

What he didn’t say, but certainly implied, was that America’s “war on terror,” actually a war on Islam for Israel, “had to wait for” the false-flag attack of 9/11.

After listing all these false-flag events, he suggested that we need another mass slaughter of Americans to trigger war with Iran:

“And may I point out that Mr. Lincoln did not feel he could call out the federal army until Fort Sumter was attacked, which is why he ordered the commander at Fort Sumter to do exactly that thing which the South Carolinians had said would cause an attack. So, if in fact the Iranians aren’t going to compromise it would be best if somebody else started the war. One can combine other means of pressure with sanctions. I mentioned that explosion on August 17th. We could step up the pressure. I mean look people Iranian submarines periodically go down someday one of them may not come up. Who would know why? We can do a variety of things if we wish to increase the pressure. I’m not advocating that but I’m just suggesting that … this is not a either or proposition…. We are in the game of using covert means against the Iranians. We could get nastier at that.”

WINEP, like AIPAC, is a criminal organization – a viper’s nest of unregistered agents of a foreign power. Even if they weren’t advocating mass murder and high treason, and calling for the silencing of opposition to the 9/11 coup they and/or their fellow travelers helped orchestrate, they should all be arrested and sent to prison.

But when they cross the line and advocate the mass murder of Americans to trigger a war for Israel that could easily become World War Three…well, I’m not sure what method of execution could suffice.

They call it “Near East Policy.” I call it high treason and conspiracy to commit mass murder.