Home Veterans Academic Prostitution in The Field of Terrorism Studies 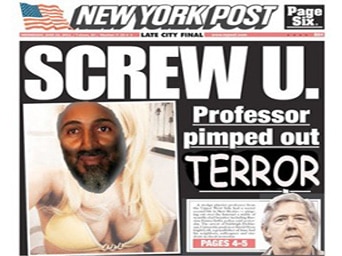 I ain’t no academic terrorism-expert prostitute. I give it away for free here at Veterans Today.

Truth is, I gave up about $2 million in projected lifetime earnings at the University of Wisconsin (and/or elsewhere in the US academy) by refusing to “service” the official story of 9/11. Meanwhile, gainfully-employed “terror experts” like Patrick Clawson say pretty much the same thing I’ve been saying: The traditional way to take the US to war is to murder a bunch of innocent Americans in a false-flag attack.  The difference is that Clawson is okay with that.

I wonder if he’d volunteer to be among the murdered? If not, I volunteer him.

Anyway, here is Elias Davidsson‘s new article on academic terror prostitution. May my former colleagues, the whores at the U. of Wisconsin and the other Bordellos of Higher Learning, read it and take a few pointers.

Disclaimer: While I agree with Elias that comparing non-9/11-truther academics to prostitutes is an insult to prostitutes, obviously Elias is less than serious when he calls prostitution an honorable occupation. When guys say that, I’ll believe them as long as that’s the kind of work they honestly want their kids and/or wives to go into.

Academic prostitution in the fiel 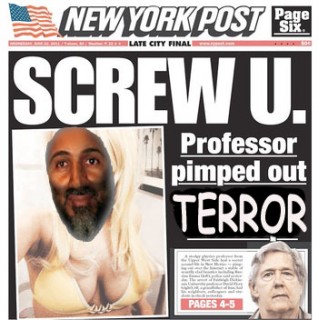 The expression “academic prostitution” appears abusive.  It either conveys an apparently arbitrary disrespect to certain academics by comparing them to prostitutes, or conversely appears to equate sexual prostitution, – an honorable, if hazardous, occupation – with intellectual prostitution, a definitely dishonorable one.

There is no dispute that even those who honestly earn their academic titles can produce shoddy scholarship, rely on dubious sources or draw spurious conclusions.  And even the best scholarship can be used or abused by the powerful for improper purposes.  Deficient scholarship or the abuse of good scholarship by third parties do not automatically transform the author into an academic prostitute.

While academic prostitutes are found in all fields of sciences, we submit that some fields virtually teem with such species, particularly those fields that directly serve the interests of powerful social agents: Political science, law, economics and communications. Since the decision was made by the governments of the most powerful states to elevate the myth of Islamic terrorism to the level of a serious threat to international peace and security, producing spin about terrorism has become a flourishing and rewarding industry.  As “Islamic terrorism” is essentially a racist myth, the maintenance of that myth in the minds of populations requires the constant production and dissemination of ideological junk. That’s where the terrorism experts come into the picture.  Their precise role is to produce this junk.

While ordinary citizens, who do not claim expertise in the field of terrorism, may be genuinely oblivious to the nature of state terrorism and to clues about probable U.S. Government responsibility for 9/11, such presumption of ignorance does not extend to terror “experts”.  It requires a fair amount of cynicism for a person even modestly acquainted with the field of terrorism, to ignore the devastating nature of state terrorism and disregard the mountain of evidence pointing to U.S. Government responsibility for 9/11.

Further clues that reveal “terror experts” as academic prostitutes can be found in their credentials. Those whose works are regularly published in mainstream newspapers or have been acting as consultants to the most powerful governments, may be presumed academic prostitutes, admittedl a rebuttable presumption.

Classifying a person as an academic prostitute is not a self-righteous act or a method to avoid dealing with an opponent’s arguments. It serves a specific public utility: It constitutes a warning to the consumer to remain particularly vigilant towards the alleged expert’s product. More generally, such classification seeks to provide a public warning to those tempted to cut corners in academic research in order to please those in power.