Home Veterans Should the US Destroy Israel’s Submarines? 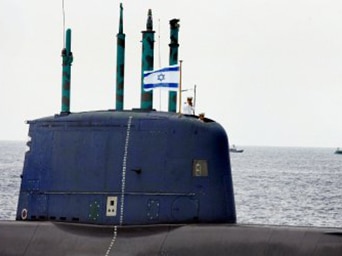 [Editors  Note:  No matter what outside threat Israeli militants attempt to use as a smokescreen, their ballistic missile submarines were designed to be, and are…offensive platforms. Everyone who has aided them in this effort has betrayed the national security of their own country…usually for money… Jim W. Dean]

It’s a well known fact that Israel currently has a growing stockpile of nuclear, biological and chemical weapons and that it has several submarines capable of launching thermonuclear weapons from virtually anywhere on the globe.

Couple this with the fact that Israel is based on the Hebrew Bible/Old Testament and it becomes very obvious something must be done to limit Israel’s deadly reach.

If the US would use Tomahawk Cruise Missiles, or any means necessary, to destroy Israel’s submarines that are capable of delivering nuclear warheads the world would be a much safer place.

The Jewish state of Israel does not have a constitution because it is much more of a religious state than it is a democracy. By not having a constitution Israel is in violation of its own declaration of independence which called for Israel to have its own constitution no later than October 1, 1948. It is also a violation of UN General Assembly Resolution 181 which put forward the idea of forming a “Jewish state” in Palestine.

The reason for a lack of an Israeli constitution is religion. As a religious state Israel cannot have any man-made laws as are found in a constitution being of greater importance than what the religious Jews consider God’s laws that are found, in Israel’s case, in the Hebrew Bible/Old Testament and the Talmud.

Being based on the Hebrew Bible/Old Testament and the Talmud makes Israel a true threat to the world, especially since Israel now has weapons of mass destruction and the means of launching them from virtually any place in the world.

It is often reported in the established media that Iran wants to destroy Israel. What is never reported is that Israel wants to rule the world based on teachings from the collection of books the Jewish state is based upon, the Hebrew Bible/Old Testament. These teachings also call for the destruction of any nation that gets in Israel’s way to world domination.

To start with these Hebrew/Jewish holy books teach Jews and the world that God chose the Hebrews/Jews “above all people that are upon the face of the earth” (Deuteronomy 7:6 among many other places). This belief in and of itself makes it apparent that if accepted that the Jews are above everyone else, the Jews should run things. After all, God himself selected them at the exclusion of all other people on Earth. It is therefore the Divine Will that they rule planet Earth (that is, if you believe this BS).

One of the leading examples of a Godly man (women are denigrated in Judaism and in its offshoots of Christianity and Islam) is Moses. The father of the war-mongering neoconservative movement, the Jew Leo Strauss, wrote in his essay Jerusalem and Athens (for an article on the most important battle of all times, the battle between Athens and Jerusalem, click here), “For almost all purposes the word of God as revealed to His prophets and especially to Moses became the source of knowledge of good and evil, the true tree of knowledge which is at the same time the tree of life.”

Based on this thinking, which permeates most of society, Moses would be a great role model to teach us the difference between good and evil. The Hebrew Bible/Old Testament itself makes it very clear to us that this is a lie.

Numbers 31:17-18 should become common knowledge among all people. For here the Bible shows Moses for the Israeli war criminal he was. The verses tell us the orders Moses gave to the Israeli army after they defeated the Midianite people. Moses ordered,

Verse 35 tells us the number of women children the Israeli army kept alive for themselves was 32,000. With Moses being considered the greatest prophet of Judaism, and with the Jewish state of Israel being based on Judaism, it is a very bad idea to allow this war and religious violence promoting religious state to have the thermonuclear reach its submarines give it. (It’s a horrible idea to allow it to have any nuclear, chemical or biological weapons at all.)

Israel and Judaism have never repudiated a sickening teaching in their Hebrew Bible. This teaching is a real and true threat to all Gentiles. It is found at Leviticus 25:44-46 and instructs Jews as follows:

“Both thy bondmen, and thy bondmaids, which thou shalt have, shall be of the heathen that are round about you; of them shall ye buy bondmen and bondmaids. Moreover of the children of the strangers that do sojourn among you, of them shall ye buy, and of their families that are with you, which they begat in your land: and they shall be your possession.

And ye shall take them as an inheritance for your children after you, to inherit them for a possession; they shall be your bondmen for ever: but over your brethren the children of Israel, ye shall not rule one over another with rigour.”

This “sacred” and “holy” teaching of Judaism lets the world know just how morally corrupt and bankrupt Judaism and Israel are. Do we really want people with this type of dangerous and repulsive mind-set to have a nuclear reach anywhere on the planet??? If we value freedom and liberty and do not want ourselves or our children and grandchildren to be slaves of the self-appointed “chosen ones,” then we must oppose Israel’s nuclear and WMD programs at every opportunity.

“that the LORD thy God will set thee on high above all nations of the earth” and Deuteronomy 28:10 puts these words in God’s mouth regarding the Jewish state of Israel: “And all people of the earth shall see that thou art called by the name of the LORD; and they shall be afraid of thee.”

With Israel’s very real thermonuclear, chemical and biological weapons of mass destruction Gentiles living in the Middle East are already afraid of Israel. Now, with it new global reach to use these horrific weapons via its growing submarine fleet, Israel can spread that fear all over our planet.

Unfortunately we have US politicians from both parties who live in fear of Israel’s very powerful lobby. Not only that, but many Zionist politicians, both Christian Zionists and Jewish Zionists, believe they are following God’s will by giving blind support to Israel at the expense of American tax-payers and world peace. One Democratic Jewish US Senator, Chuck Schumer of New York, actually said on a Jewish radio program that he is Israel’s protector in the US Senate!

This very real danger of Jewish superiority which Israel is based upon and of Israel’s thermonuclear weapons, as well as its biological and chemical weapons of mass destruction, and its expanding fleet of submarines which can carry and deliver this massively deadly arsenal anywhere on Earth, coupled with Israel’s insanely violent and inhuman religious roots as are found in the Hebrew Bible/Old Testament as well as in the Talmud, makes the removal of Israel’s submarines of vital importance to everyone on Earth.

It would be profoundly beneficial to remove all of Israel’s nuclear weapons and all of its WMD. However, destroying its fleet of submarines would be a great start and would go a long way in lowering the risk of a thermonuclear war.