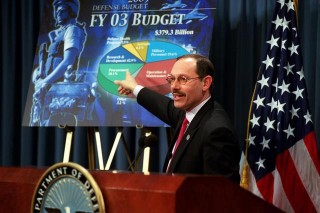 “The missing 2.3 trillion? We stole it to pay for 9/11. Any further questions?” -Rabbi Dov Zakheim

In May 2011, a team of US Navy Seals allegedly killed Osama Bin Laden, then dumped a bearded body in the ocean before it could be identified. The American people were told that the mastermind of the 9/11 attacks had been “taken out.” Revenge had been exacted; justice had been served. Right?

Wrong. The real perpetrators of the 9/11 attacks are still at large. And what’s worse, they control most of the United States Federal Court system and mainstream media, and are running the campaign of presidential candidate Mitt Romney.

Romney’s top foreign policy advisor is Rabbi Dov Zakheim, one of the leading suspected hands-on designers and controllers of the Israeli-instigated 9/11 false-flag operation. On May 4th, 2001, Zakheim was appointed Comptroller of the Pentagon, where he proceeded to “lose” at least 2.3 trillion dollars – a sum amounting to more than five times the Pentagon’s annual budget. (CIA whistleblower Susan Lindauer says the actual sum is 9.1 trillion dollars.)

On Monday, September 10th, 2001, Pentagon Chief Donald Rumsfeld announced that 2.3 trillion dollars had gone missing from the Pentagon. The oddest thing about this announcement, besides the gargantuan sum, was its timing. It was the first and last time that any significant political figure has ever chosen to announce major bad news on a Monday. Reveal a scandal on Monday, and the media will have all week to “give it legs.” Reveal it on Friday, and it will get lost over the weekend. That’s why all self-damaging revelations are aired on Fridays.

Rumsfeld, unlike most of us, apparently knew in advance that a huge news story, even larger than the Pentagon losing five times its annual budget, would break on Tuesday, September 11th, 2001, and make everyone forget about the missing 2.3 trillion.

So what happened to the Pentagon’s missing 2.3 trillion dollars (or 9.1 trillion dollars if you believe Susan Lindauer)? The one thing we know for sure is that it has never been found…at least not officially. Lindauer says insiders know it was embezzled by agents of Israel. Interestingly, the Comptroller of the Pentagon – the man who was running the Pentagon’s finances – was a known Israeli agent, Rabbi Dov Zakheim. (Yes, he really is a rabbi!)

Conveniently for Zakheim and Rumsfeld, the 9/11 attack on the Pentagon targeted the accountants who were on the trail of the missing trillions. According to Barbara Honegger, recently-retired Senior Military Affairs Journalist at the Naval Postgraduate School in Monterrey, California, those accountants were killed in precise, surgical bombings carried out under cover of a nonexistent “hijacked 757 crash” at the Pentagon.

Rabbi Dov Zakheim, top advisor to Romney, did not merely help embezzle trillions of dollars from US taxpayers to pay for the 9/11 operation. Before becoming Pentagon Comptroller, Zakheim ran System Planning Corporation (SPC), which developed a Flight Termination System or FTS. As article on the subject states:

“This highly sophisticated war-game technology allows the control of several ‘drones’ from a remote location, on varying frequencies, and has a range of several hundred miles. This technology can be used on many different types of aircraft, including large passenger jets.”

Zakheim’s FTS system was apparently used to remote-hijack passenger aircraft, and stage a military attack disguised as a hijacking incident, under cover of the 46 military drills happening on and around September 11th, 2001. (One of those drills, a live fly hijacked-plane-into-building exercise, apparently “went live,” while the others provided distractions and excuses.)

Rabbi Dov Zakheim is not the only 9/11 suspect associated with Romney’s presidential campaign. Another is Sheldon Adelson, the Las Vegas mafia kingpin, who gave 100 million dollars to Romney, thereby buying Romney’s eternal enslavement to the looney-tunes Likud faction in Israel. Adelson is reputedly linked to the same Likudnik crime mob that includes most of the key perpetrators of the 9/11 attack on the World Trade Center, including “Lucky Larry” Silverstein, Frank Lowy, and Lewis Eisenberg – the mobsters who stepped forward to take the money-hemmoraging, asbestos-ridden Twin Towers off of New York City’s hands, and set up an extralegal demolition, “urban renewal by other means,” to be blamed on Israel’s enemies.

The mass-murderers of 9/11 are not only running Romney’s campaign, they’re also in control of the US federal courts. The latest example: Yesterday US Federal Judge George Daniels ordered Iran and other innocent parties to pay six billion dollars in damages to the victims of the 9/11 attacks. Why Iran, a long-time adversary of Bin Laden and the Taliban? Because Iran is Israel’s enemy du jour, and the Likudnik 9/11 criminals own the US court system. Daniels’ ruling is only one of a long series of US Federal Court outrages in which the innocent are blamed, and the guilty rewarded, for 9/11.

The Likud crime mob that orchestrated and carried out 9/11 owns not only the Romney campaign and the US federal courts, but most of the big US and global media as well. It isn’t just that the people who own and run the media tend to be Jewish and pro-Zionist, as CNN’s Rick Sanchez observed shortly before he was fired. (The well-known Jewish journalist Philip Weiss has estimates that “more than half” of the people he worked beside, and for, in the US media are Jewish, and that most of them are consciously propagandizing for Israel in their media work.)

The problem is that only six corporations control 90% of the media in America. And whether or not those six corporations are entirely owned by the Rothschilds, the founding family and true owners of Israel, they are obviously owned and controlled by Zionists, as anyone who follows media coverage of the Middle East can see. By far the single most powerful force behind the 9/11 cover-up is the complicity of big media, which have taken every available opportunity to hide the true facts of 9/11, and trumpet the genocidal myth that Muslims were responsible.

It is not surprising that Americans’ trust in big media has reached a new low according to the latest Gallup poll. If this trend continues, a “tipping point” will eventually arrive when a sufficient number of Americans demand 9/11 justice. When that day comes, the 9/11 criminals running Romney’s campaign, the federal courts, and the mainstream media will quickly fall from their current positions of power, and find themselves twisting slowly in the breeze.

Let us hope and pray that that day arrives soon.