Home Veterans How al-Aqsa Mosque Became a Refugee from Jerusalem 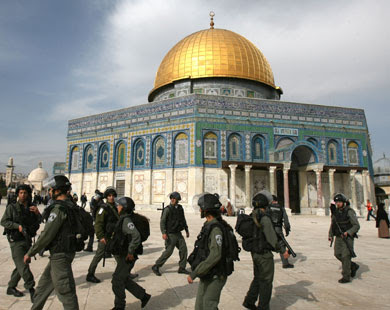 Paul Larudee – How al-Aqsa Mosque Became a Refugee from Jerusalem

Once upon a time, some people wanted to destroy al-Aqsa mosque in  Jerusalem. So the mosque asked its friends, “Will you help save  al-Aqsa?”  We’re over a thousand years old and need your help.

“Not us,” said the Palestinians still living in Jerusalem.  “We’re trying to keep our own houses and land.”

“Not us,” said the Palestinians with Israeli citizenship.  “We’re already a persecuted minority in Israel.”

“Not us,” said the West Bank Palestinians.  “We’re trying to save what we still have.”

“Not us,” said the Gaza residents.  “We don’t want another Israeli pogrom.”

“Not us,” said the Palestinian Muslims.  “We don’t want to be called terrorists.”

“Not us,” said the Palestinian Christians.  “Our churches are being  defaced and burned by the same people.  We have our own problems.”

“Not us,” said the NGOs.  “We only provide social services.”

“Not us,” said the diaspora Palestinians.  “We have a hard enough time keeping people from noticing that we’re Palestinian.”

“Not us,” said the Western liberals.  “We’re more concerned about keeping anti-Semites out of the movement.”

“Not us,” said the Western churches.  “We have to keep good relations with our Jewish brothers and sisters.”

“Not us,” said the Arabs.  “We’re busy with our own liberation movements.”

“Not us,” said the Muslim communities in non-Muslim countries.  “We want our countries to think of us as good citizens.”

“Not us,” said the Muslims in Muslim countries.  “We will denounce  your persecutors but remain good Muslims by fasting, praying, doing  pilgrimage, giving to the poor and declaring our faith, not by defending  you.”

“Not us,” said the rest of the world.  “We have to atone for the Holocaust.”

So al-Aqsa mosque waited for something to happen.  And it did.

Finally, Israel said, “The al-Aqsa mosque is empty and this is now a  Jewish community, thanks to our Judaisation program.  We don’t need a  mosque, so we’re going to demolish al-Aqsa and replace it with a nice  new Jewish temple.  We don’t want any harm to come to you, so please  pack your things and leave now, along with the rest of the Palestinians.

And that is how al-Aqsa mosque became a refugee like other Palestinians.