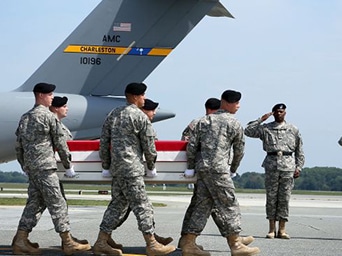 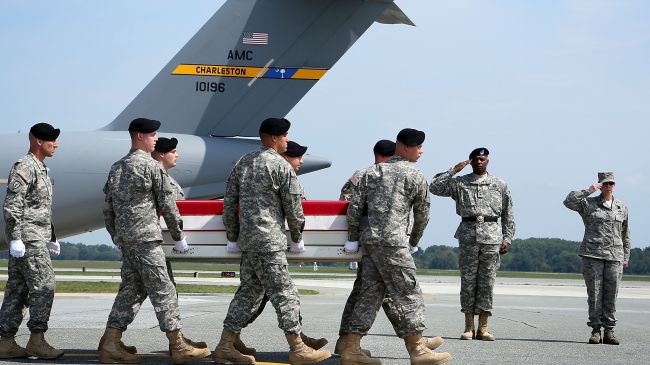 Americans aren’t reading it in the news, the 2000th death of an American soldier in Afghanistan, ever increasing attacks each month and, most secret of all, the newer weapons being deployed.  These are the real “game changer.

Taliban and Pashtun militants have come into possession of, not only advanced longer range and more accurate rockets, such as those that took out a squadron of Marine Harrier VTO (Vertical Take-Off) jet fighters outside Kandahar a week ago.

Now America is curtailing all but the most vital air operations as advanced surface to air missiles have appeared on the scene, almost as though the clock had gone back two decades when it was American Stinger missiles, brought to Afghanistan by CIA Colonel Tim Osman, known to many as Osama bin Laden.

Today, it is Americans on the receiving end with two more years of war scheduled and quite clearly all of it going in the wrong direction.

Only recently, after 11 years and nearly $80 billion spent, did America have to give up all operations with Afghan forces, forces that have had more military training per man for a longer period of time than any force in history.

Added to the 2035 American dead are well over 1000 coalition dead.  Untold Afghans have died, some from combat but even more from drone attacks which are, in actuality, credited with doing more to build militant forces than anything else.

America was warned that indiscriminate use of drones in, not only Afghanistan and Pakistan would build regional hostility but Afghanistan is the proof with increasing numbers of Karzai’s “troops” turning on their western “allies” in ever increasing numbers.  Thus, America and its “coalition partners,” after well over a decade, fight alone, beset by both friend and enemy.

One aspect of the war, seldom discussed but very much a part of the motivation to continue what is beyond a “losing cause,” is the supply of heroin leaving Afghanistan by aircraft.  American “pop culture” media claims the Taliban is exporting drugs though no one has ever seen a Taliban aircraft.

Some suspect it might be the CIA doing the exporting and, most certainly, former Special Envoy Richard Holbrooke made increasing drug production a keystone of his policy.

With the 30,000 troops sent to Afghanistan to “beef up” US forces for the “surge” leaving, the Department of Defense has turned to its mercenary partners to hire any former soldier capable of returning.

Thousands of “private contractors” are being hired as we speak, scheduled to stay in Afghanistan until 2014 or until the last poppy plant dies.

Some of the troops being sent over are in their 70’s with a few approaching 80 years old.  Some are my friends, forced back to Afghanistan as it is they are the only providers for their families, some returning to war to pay for the education of their grandchildren.  Some may actually be there to support great grandchildren.

Some of my friends entered service when Eisenhower was president.

What has never been approached is the simple fact that the war in Afghanistan and the fairy tales of Al Qaeda and Osama bin Laden the media and too many leaders have been cowed into parroting is pure mythology.  No training camps existed, bin Laden never controlled a terrorist organization and no intelligence report or proof submitted to any tribunal has ever disputed this.

Moreover, more than a few, CIA, Army and others willing to tell the truth will state clearly that both Iraq and Afghanistan were fought over falsified intelligence, a conspiracy that is slowly becoming part of American history, Bush, Cheney, Wolfowitz, Rumsfeld, Clarke, Cameron and, of course, Blair.

A generation of Americans will grow up looking on this period as the darkest of their history when America became the enemy of the world, a nation of thieves and liars, racist thugs, kidnappers and torturers, rapists and bigots.

History will remember this for a thousand years.

Despite attempts to dispel the truth, Russian news agencies, Ria Novosti and Izvestia were able to interview “Pastor” Terry Jones.  Here is the substance of the Jones interview:

The American pastor Terry Jones is known for having invented the “Day of the burning of the Koran,” he wanted to coincide with the anniversary of the attacks of September 11, 2001. Today, Jones is again under the spotlight: he was suspected of having made the film “Innocence Muslims,” which caused waves of protests in the Islamic world. Egyptian authorities have issued an arrest warrant against the pastor and he was banned from Germany, where he was invited by the extreme right. Terry Jones has agreed to an interview with the Russian daily Izvestia to talk about the link between him and the film “Innocence Muslims.”

Terry Jones:  I have been in contact with the crew about five weeks ago. I spoke with the director of “The Innocence of Muslims.” …The director asked for help to promote the film and the only thing I have to do with him; this is the online videos on some sites.

Izvestia:  You often criticize the U.S. president. Why?

Terry Jones:  “I think he is himself a Muslim. His relationship with Islam is very strong. Remember that his father was a Muslim – and his adoptive father also. On entering the school, he identified himself as Muslim.

Izvestia:  “You want to ban Islam in the United States? And freedom of expression then?”

Terry Jones:  “The problem is the radical elements. Those who want to harm the national institutions of the United States. We do not want that infringes on our constitutional rights.”(Terry Jones attacks on Islam have, of course, been a primary cause of radicalization.)

“I had spent 30 years in Europe. When I returned, I was terrified by the moral, spiritual and economic and politicians who run it now are only playing politics.” (Jones spent his 30 years in Europe serving with the CIA)

Izvestia:  Throughout the world, many people want to burn your death and wants revenge for your attitude towards Islam.

Terry Jones:  “This worries my family. I would not say we are afraid but we are worried. We received hundreds of thousands of death threats to me and my family. My head has been priced for $ 2.4 million. And whenever I organize a new action – International Day of the burning of the Koran, the judgment day of the Prophet Muhammad and today after the release of this film on my sites – we get 3000 promises a day of murder.”

Terry Jones, the man responsible for the death of dozens and demonstrations that have continued for weeks, the world over, didn’t work alone.  The powerful Koch Brothers through Washington’s CATO Institute, a right wing pro-Israeli “think tank” was the source of financing. Jones has no money, no assets and fewer than a dozen backers, all poor, destitute, most on welfare.

Though destitute, Jones has the backing of a press corps as large as the White House, has funds to run worldwide steaming HD video days at a time and commands nearly as much press attention as the British Royal family though Jones has no education, few followers and represents no respected or widely held point of view.

There is only one reason the world has heard of Jones.  He is closely tied to the Israeli lobby and now works directly with groups affiliated with the Mossad.

There was another aspect to the Jones’ “festival of blasphemy” on 9/11.  The streaming video with film clip [costing two million dollars] was carried around the world by Israeli controlled Google and its subsidiary, YouTube.  Even when asked by the president of the United States to stop the broadcast, Google refused.

Google and YouTube cancel thousands of accounts per month, sometimes per week.  The reason?  Complaints that material contains a message offensive to a religious or ethnic group mean immediate death to a YouTube account holder, no evidence required.

This is in Google’s bylaws unless the target is tied directly to, as in this case, the long planned assassination of the American Ambassador to Libya.

Secretary of State Clinton was quickly advised by the US military that the Benghazi attack took weeks of planning, was carried out by a highly skilled special operations unit and would have been impossible without her own State Department being fully complicit, supplying intelligence to the forces that were fed into Libya, coordinated directly with the Jones broadcast.

It was also obvious to Mrs. Clinton that the organization that planned the assassination was the Israeli Mossad at the orders of Prime Minister Netanyahu.

Netanyahu looked for the killings and concurrent riots to boost Mitt Romney, his longtime associate, who is Israel’s last hope.  President Obama’s assurances serving Israel by bombing Iran had been flatly refused.

Moreover, after the election, based on the breakdown in trust between Israel and the US at so many levels, continued financial support and even possibly, as Kevin Barrett stated, an investigation that might find Israel fully complicit in the crimes of 9/11 was possible.

A few weeks before an election is no time to “air dirty laundry” so Mrs. Clinton sent out word to her puppets.  Libya first blamed militias tied to Gaddafi and led attacks against them.

As that story wasn’t clear enough, the poor long dead body of Osama bin Laden’s imaginary “Al Qaeda” had to be blamed and the new President of Libya was tasked with telling the tale.

In 2009, then CIA Director Leon Panetta claimed that Al Qaeda had fewer than 12 members.

He was trying to say they never existed but, in America, telling the truth is considered “conspiracy theory.”

Thus, every news organization in the world can obsess on the baseless idea of Iran developing a nuclear weapon while Israel has over 200.  As Zionist historian Martin Van Cleveld has warned, Israel has long targeted Western Europe for nuclear destruction and only looks for the right time.

Do you wonder why we lie so much, why history is mythology?  Were we to teach honor and truth, we might run out of pliable sociopaths, the base material so much of society seems to be built from.