Home Veterans NATO Undermining The UN and Should Be Abolished – Former Assistant UN... 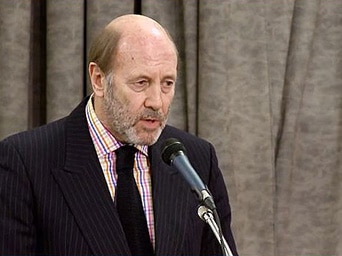 NATO is a “dangerous” instrument of American aggression that is undermining the United Nations and “must be abolished,” a former Assistant Secretary-General of the UN says.

“The danger to global equilibrium is a growing NATO being expanded further by American and British ambitions into a monster military force of world proportions, way beyond any Atlantic or European alliance,” writes Denis Halliday, who served in the high UN post from 1994-98.

Terming NATO an “affront” to European states committed to genuine peacekeeping, Halliday says NATO is “a redundant, extravagant and unwelcome military toy that gobbles up human and financial resources to no positive end.”

“It is nothing but a negative force,” Halliday continues in the Foreword to a new book, The Globalization of NATO(Clarity Press), by Mahdi Darius Nazemroaya, the distinguished Canadian geopolitical analyst.

“Worse, under the constant pressure of corporate arms dealers, funding for (U.S.) presidential elections and pathetically beribboned generals NATO has strayed beyond the scope of the original post-World War II alliance into threatening sovereign states such as Iran where dialogue together with homegrown solutions would likely suffice….without loss of innocent life, hugely damaged civilian infrastructure and the horror of nuclear weapons.”

What’s more, Halliday writes, “Genuine humanitarian intervention, or R2P as it is known, can never again be entrusted to NATO forces. Clearly NATO has no objectivity in a situation such as the much needed protection of the Palestinian civilian people from Israeli occupation, violation of their human rights and endless mutl-diverse forms of violence.”

Halliday warned of “the creeping slime of NATO expansion into Asia” and said its “attempt to surround Russia, China and others can only end badly for the billions of human beings involved.”

Acknowledging the UN has become “ineffective” as a peacekeeper, Halliday says NATO “has no proven interest whatsoever in peace and non-violent coexistence. Warfare is the most profitable business of all. The military arms industry keeps entire economies afloat. Peace would put NATO out of the large scale and rewarding killing business.”

He charged NATO “constantly seeks new resources, new weapons and new members to pursue violence against non-existent enemies, creating opportunities for warfare that require nothing more than dialogue, cooperation in a mature and civilized manner.” Halliday adds, “There is nothing mature or civilized about NATO, or its leadership.”

Halliday said the U.S. should be “disarming, and investing in the poverty of its own people, dealing with its economic collapse and adjusting to the pain of a declining empire facing its demise.”

In his book on NATO, Nazemroaya writes, “NATO expansion
is not just limited to Europe, but is in pursuit of a worldwide capability to expand Washington’s empire under a global confederacy.”

As part of this expansion, Nazemroaya adds, “The U.S. and NATO have literally authorized themselves to go to war anywhere in the world.”

Moscow feels threatened, he adds, by the offensive military characteristics that NATO has adopted since the end of the Cold War, ”which has taken NATO from intervention in the former Yugoslavia to fighting in Afghanistan and Libya, and both security and training missions in the Middle East and Africa.”

Authorities around the world have showered author Nazemroaya with praise for his work in general and The Globalization of NATO in particular. “I hope this book will be read by very, very many who can turn this morbid fascination with violence into constructive conflict resolution,” writes Johan Galtung, Professor Emeritus of Peace Studies and Sociology at the University of Oslo, Norway, recognized as the founder of peace and conflict studies. “This book is a must read for those committed to reversing the tide of war and imperial conquest by the world’s foremost military machine,” adds Michel Chossudovsky, Professor Emeritus of Economics at the University of Ottawa, Canada.

Again, “Nazemroaya’s book, in addition to reminding us that the role of the United Nations has been confiscated by NATO, elaborates the danger that the North Atlantic Treaty represents to world peace,” writes Jose L. Gomez Del Prado, former Chairman of the United Nations Working Group on the Use of Mercenaries, of Ferney-Voltaire, France. And, in the words of Tiberio Graziani, President of the Institute of Advanced Studies in Geopolitics, of Rome, “This is a book really necessary to understanding the role of NATO within the frame of long-term U.S. strategy. It not only provides an articulate analysis on the Atlantic Alliance: it is the best modern text devoted to the hegemonic alliance. With this book Nazemroaya reconfirms his ability as a brilliant geopolitical analyst.”

Adds Admiral Vishnu Bhagwat, former Chief of the Naval Staff of India, “(Nazemroaya) is one of the prescient thinkers and writers of contemporary times who deserves to be read and acted upon by people with a conscience and concern for humanity’s future.” And Miguel D’Escoto Brockmann, former Foreign Minister of Nicaragua and President of the 63rd Session of the United Nations General Assembly, said: “The Globalization of NATO by Mahdi Darius Nazemroaya is simply magnificent, erudite and devoid of the ethnocentrism to which one has become so accustomed from Western authors…”

Sherwood Ross formerly reported for the Chicago Daily News and the New York Herald-Tribune and contributed weekly columns to major wire services. Currently, he is a public relations consultant for good causes, including the NATO book. Reach him at [email protected]. To purchase the book : http://www.claritypress.com/)