The islamophobia industry says “Islam is a culture of death.” They point to the fierce warriors of Palestine, Iraq, Afghanistan – wherever an Islamic country has been invaded – who say: “We love death as much as you love life.”

The islamophobes are missing the point. What the fierce Islamic warriors are really saying is: “We’re not afraid to die, because our cause is just.” They’re saying: “You Western Zionist-slave chickenshit pussies blow up our women and children from hundreds of miles away with drones and bombs and missiles because you’re afraid to risk your pampered fat-ass lives in a fair fight.”  And: “Maybe that’s because you know you’re a bunch of war criminal scumbags, murdering innocent people in a country halfway around the world in an unjust war.”  And: “You feel so guilty about what you’re doing, you’re afraid to meet your Maker. Well, guess what? WE aren’t. BOOM!!!”

America, with its long-distance killing machine, has become the most cowardly war-criminal nation ever to disgrace the face of the earth.

And it’s the West, not Islam, that is enmeshed in a sick, twisted, kinky love affair with death.

The latest example: Comedian Bill Maher, he of the perpetual smirk, has apparently signed a  contract (in blood) with his new agent, the Grim Reaper. Maher says he wants to see more and more abortions, suicides, and executions. He wants hangings, gassings, shootings, electrocutions. Maybe even dismemberments, disembowelments, defenestrations, beheadings, and crucifixions. Why? Because “the planet is too crowded and we need to promote death.”

Here is Bill Maher’s proposal for a new planetary national anthem, to be officially adopted by the United Nations.

I have been calling for the execution of Bill Maher for years, only half tongue-in-cheek, since Maher regularly commits a capital war crime: Incitement to genocide.

Now that Maher has come out for killing off “the right people,” maybe I could help him with an assisted suicide? I’ll bet it would be Maher’s highest-rated show ever. And draw the biggest round of applause. Telegrams of congratulations would come pouring into his coffin from all over the world.

The real issue here is that Maher is using far more than his share of the planet’s limited resources. Even average middle-class Americans are already killing the planet with their bloated energy consumption and obscenely lavish lifestyles (while the people in Iraq, Afghanistan and Palestine that Maher wants to kill are using a tiny fraction of that).

But Maher ain’t no average American. He’s a super-rich fat cat, one of the 1%, maybe even the 1% of the 1%. His smirking pretense at defending the middle class is a sham, since he’s living the multi-millionaire Hollywood lifestyle while taking huge tax subsidies from poor people.

How did America ever get to a place where not-very-funny creeps like Maher (compare him to genuine talents like George Carlin and Bill Hicks – funny how the no-talents who get promoted beyond their level are so often Jewish Zionists, like their bosses) are applauded on a nightly basis by the liberal elite?  How did America become a culture of death?

You haven’t really grown up until you know, deep in your bones, that you’re going to die. And are okay with that.

Most Americans have never really grown up.

We actually pickle dead people in hopes that they won’t really look dead, won’t decay, won’t go back to the earth:

Alas,  poor Yorick! How surprised he would be to see how his counterpart is whisked off to a funeral parlor, and is in short order sprayed,  sliced,  pierced,  pickled,  trussed,  trimmed,  creamed,  waxed,  painted,  rouged, and neatly dressed — transformed from a common corpse into a Beautiful Memory Picture. This process is, known in the trade as embalming and restorative art,  and is so universally employed in the United States, and Canada that the funeral director does it routinely,  without consulting corpse or kin. …Yet no law, requires embalming,  no religious doctrine commends it,  nor is it dictated by considerations of health, sanitation,  or even personal daintiness. In no part of the world but in North America is it widely used….  –Jessica Mitford

We don’t take care of our own old people. We don’t kill our own meat. (At least Bill Maher’s urban liberal audience doesn’t.) We don’t wash and bury our own corpses.

The people who have their dead pets stuffed by a taxidermist who “tries to re-create their spirit and expression” are just carrying this ubiquitous American death-denial to its logical conclusion.

Pretty soon we’ll be stuffing old Uncle Fred and mounting him on the wall and carrying on the same kind of conversations we’ve had with him since he lost his hearing a few years back. And guess what? He probably STILL won’t understand the significance of World Trade Center Building 7.

Just like Maher. Even if we killed, stuffed, and mounted Bill Maher (and I’m certainly not advocating anything like that, at least not the stuffing and mounting part) and had a professional corpse-pickler “try to re-create his original spirit and expression” by squeezing his facial muscles into that expressionless rictus smirk that he wore throughout his life, the sonofabitch would  STILL  be deaf to the people trying to wake him up to the implications of World Trade Center Building 7.

This quintessentially-American death-denial is what makes us frenetically export death to the rest of the world. Maybe we think if we export it, we can get rid of it.

And make no mistake, death is our #1 export. It’s becoming pretty much our ONLY export.

It isn’t just the millions of innocent people we murder in Iraq and Palestine and Afghanistan and Yemen and Somalia and Columbia and elsewhere with our cowardly drones and missiles and bombs.

We also export death in the form of GMO-tainted food. It’s killing off everyone who eats it, slowly but surely. And our GMO scientists are celebrating the massacre. Ain’t population-reduction wonderful?

And don’t get me started about US bio-war-manufactured Lyme disease. (If each of us whose life has been made living hell by Lyme disease could kill just ONE biowar scientist, we could easily take them all out, and leave an infinitely nicer planet for our kids…though naturally I’m not advocating that – death is far too kind a fate for a bio-war scientist.)

We’re also spreading death around the planet by forcing everyone to take our dead presidents, printed on worthless green paper, which the hungry slaves in countries shipping us their stuff can’t eat. If we put dead presidents on toilet paper, at least they’d be good for something. 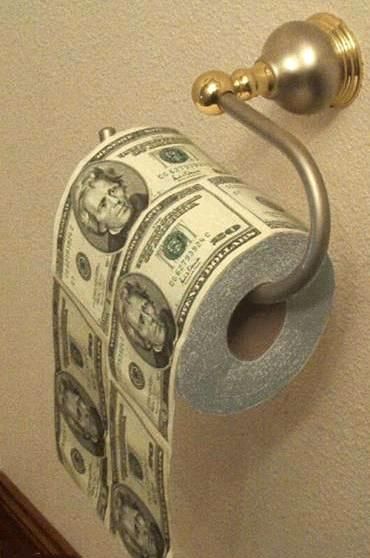 The dead presidents, at least the post-1913 ones, have been slaves to the real planetary death machine behind it all: The Rothschild bankster syndicate. Roughly 40% of the cost we pay for everything we buy goes for interest…usury…riba. In the West, most of that gets funneled into the Rothschild-and-friends criminal syndicate: the deep state, the government-behind-the-government.

You can buy a lot of social control, a lot of propaganda, a lot of hit men, a lot of universities, a lot of black ops specialists, a lot of TV stations and newspapers and Hollywood studios, if you’re collecting forty cents from every dollar ever spent on anything.

And once you’ve got all that control, all that power, why not use it? Why not develop weather weapons, earthquake weapons, mass-disease weapons? Why not buy a surveillance and control system to enslave the whole world?

Why not kill off all the “useless eaters,” the seven billion people currently inhabiting the planet, and just save a few million microchipped zombies to serve as slaves on your planetary plantation?

So that’s where we stand: Cogs in a gigantic planetary-scale death machine, waiting for our New World Order overlords to pull the switch and start the die-off. They’ll be able to smell the pile of six billion rotting corpses all the way to Alpha Centauri.

Hey, as long as Bill Maher goes first, I’m down with it.