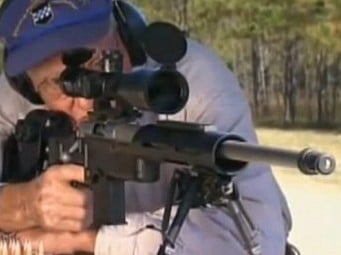 When I first saw this story I thought to myself that it could not be true…three head shots on his first time shooting at the 1000 yard range on the new guns?

But it really happened folks and you can watch on the video below. Ole Ted not only has the Right Stuff, but has improved his game.

Back in WWII 300 yards was normal sniper range, so that was all they ever trained for.

I am sure that his top Army sniper team coaches, world champions, were a great help…but putting those rounds on target at a 1000 yards, the first time shooting the weapon…you have to see to believe. And amazingly, Ted had not shot since his WWII days!!

Snipers have not always been loved throughout warfare. In the Civil War days they were despised. Drilling somebody in the act of relieving himself was considered an act of cowardice beyond description.

Troops in stationary line positions often worked out ‘no shoot’ deals with their counterparts during static periods, against the orders of their officers. This even included pretend shooting to keep them happy.

Ted was being hosted at Fort Benning for a rare ‘black hat’ sniper presentation by the Army’s elite team, the 9th honorary one they have done. And as you will see, Ted went on to earn his hat in spades by freaking the young fellas out with his five inch grouping on the 1000 yard range.

It was a memorable day for all, especially as Ted got the red carpet tour of the National Infantry Museum, a must see for folks passing through Georgia. I regret to admit that I have not made it down there yet as I travel less and less now.

I have fond memories of shooting a Heritage TV  War Dogs Memorial event ten years ago at the dedication of the second of only two monuments to the dogs. The footage is among my most treasured and I hope to have highlights up for you on VT by year end.

Stephen Ambrose was the headline speaker and really held the crowd with his wonderful talk on the Lewis and Clark expedition.

Merriweather Lewis’ dog Seaman was the star attraction, all the way to the end when Lewis died and the dog refused to leave his grave site and died their himself.

But Ted did not die in WWII. He survived the Battle of the Bulge to come back and live a normal life, that is until they put a rifle back into his hands. They warmed him up shooting a replica of his Springfield 1903 where he drilled his rounds home. Then it was time to move up to big leagues.

This is a story you have to see to believe. God bless all those who left their normal lives to go off to fight and came home to pick up where they left off. Not all were so fortunate, even those who came home and were never normal again.

But Ted has survived to share his big day with the rest of us. Enjoy the rare moment.