The oath every person who joins the US military takes is: “I, (NAME), do solemnly swear (or affirm) that I will support and defend the Constitution of the United States against all enemies, foreign and domestic; that I will bear true faith and allegiance to the same; and that I will obey the orders of the President of the United States and the orders of the officers appointed over me, according to regulations and the Uniform Code of Military Justice. So help me God.”

One key component of both oaths is the US Constitution which includes the much more important Bill of Rights.

By sending the American military off to fight wars over issues that are of no concern to Americans, the US politicians are clearly playing our troops and their families for fools.

The unnecessary war with Iraq is the blue-print for the war with Iran which is in all probability coming soon. The war with Iraq was started for Israel’s benefit. However, the US politicians could not openly say so. As former George W. Bush adviser Philip Zelikow said, among the American people Israel’s security “is not a popular sell.” The same holds true with sending Americans to die for the Jewish state of Israel in a war with Iran. 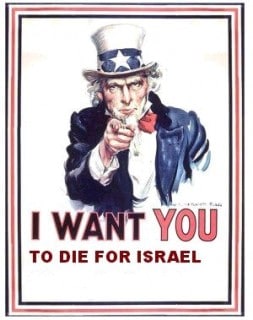 Just as the politicians, government officials and mainstream media lied to the American people about Iraq having nuclear weapons in order to get that unnecessary war started, so they are now lying to the American people about Iran having a program to build nuclear weapons. The fact is Iran does not have a nuclear weapons program according to US intelligence reports. But that won’t stop the political whores from both parties in their pursuit of a war with Iran in order to bolster their political careers by winning favor with the over powerful Israel lobby. They don’t care how many Americans and Iranians die or how much deeper America falls financially, to them the cost is well worth it.

Things are so bad and so insanely Israel-centric  that US Senator Chuck Schumer, who is a Jew, openly said he believes his job in the US Senate is to be Israel’s protector. On a Jewish radio program in New York he said, “You know, my name …. comes from the word shomer, guardian, watcher. My ancestors were guardians of the ghetto wall in Chortkov. And I believe Hashem (God) actually gave me that name. One of my roles, very important in the United States senate, is to be a shomer — to be a or the shomer Yisrael. And I will continue to be that with every bone in my body … ” If these Israel over all attitudes were not so deadly, dangerous and costly, Schumer would be comical along the lines of the Blues Brother who thought they were “on a mission from Gad!”

To show what saps American politicians and Israel are making of Americans and the Americans in the US military in particular is this quote from the retired Israeli General Avraham Rotem. A few days prior to US politicians from both parties starting the war with Iraq for Israel’s benefit, Rotem said, “A (US) war with Iraq serves Israel’s strategic interests because it wants Saddam gone. Someone says, ‘You sit back, we’ll take care of it’ – – what’s better than that?” (St. Petersburg Times, March 15, 2003, p.5A) Are we going to sit idly by while they do the same thing with Iran?

The politicians’ and Israel’s pushing us into war after war for Israel’s benefit is wrong. It is worse than a slap in the face. The Semitic New Testament says that Jesus said, “If a man smite thee on the right cheek, turn to him the other also.” This submissive mindset is also wrong and dangerous, although it’s easy to see why governments would love it and helps to explain why governments give huge tax-breaks to religions!  I like what the American founder and Deist Thomas Paine wrote about this teaching. Paine wrote in The Age of Reason, The Complete Edition (for Kindle version click here) that “it is assassinating the dignity of forbearance, and sinking man into a spaniel.” We need to let the politicians and Israel know we’re not dogs/spaniels who they can cower into submission and that the days of us passively marching off to war for a Greater Israel of biblical proportions as the eloi offered themselves up to the morlocks in H.G. Wells’ The Time Machine are over!