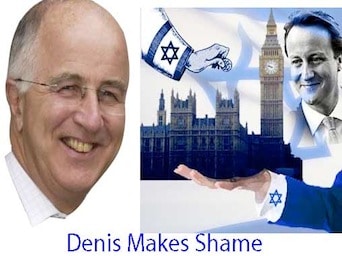 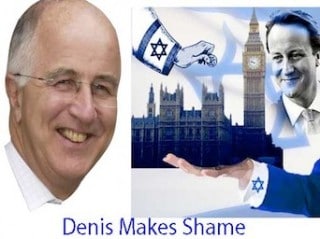 Seemingly, the list of Zionist swindlers never stops expanding.  The shameless Labour MP Denis MacShane who made a political career chasing and harassing the critics of Jewish Power and Israel has resigned from Parliament  yesterday after being found guilty by the Parliamentary standards committee. The Zionist stooge who was also the chair of the all-party Parliamentary inquiry into antisemitism was falsifying his expenses -the Parliamentary committee found he had submitted no less than 19 false invoices which were “plainly intended to deceive” Parliament’s expenses authority.

MacShane was amongst the leading voices within the rabid Zionist Labour Friend of Israel lobby group. I can only hope, that the corrupted Labour MP has enough integrity in his system to admit that opposition to Israel and Jewish Power is far for being racist. It is actually driven by an ethical attempt to clean our public life of people of his ilk. We want our politicians and political life to be liberated of Zionist power. We want our parties to be free of their MacShanes.

MacShane told the Zionist Jewish Chronicle  that he remains “committed to work for progressive values, for Britain playing a full part in Europe, and for combating antisemitism”.

It is good to learn that a person who has just been exposed as a crook has the stomach to present himself as an authority on ‘progressive values’ and ‘antisemitsm’. Denins MacShane better look in the mirror. It is actually him and his conduct as an avid Sabbath Goy,  that turn opposition to Israel, its lobby and Jewish power into an ethical obligation.

The Wandering Who? A Study Of Jewish Identity Politics, Jewish political interest  and Sabbath Goyim ala Denis MacShane