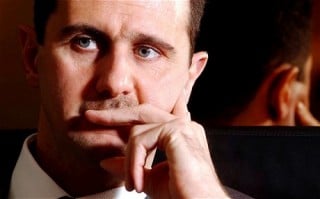 In a rare interview with Russia Today TV, President Bashar Assad vigorously clarified his stance on the current Syrian crisis created by the West and some regional states including Saudi Arabia, Turkey and Qatar and warned them of the apocalyptic consequences of any foreign intervention in Syria.

“I do not think the West is going [to intervene], but if they do so, nobody can tell what is next. I think the price of this [foreign] invasion if it happened is going to be more than the whole world can afford,” Assad said in a Thursday interview with Russia Today TV network.

Assad warned that the domino effect of any military attack on the country “will affect the world from the Atlantic to the Pacific and you know the implication on the rest of the world.”

Assad is well aware of what the West and their Arab allies are up to and what kind of scenario they are planning to follow in his country.

Syrian crisis has been dragging on for months now and a large number of people including civilians have been killed. The sabotaging efforts of the West and the financial funding of the insurgents by the regional states have not yet yielded any fruits whatsoever in helping these antagonistic forces to achieve their goals in Syria.

There was an initial assumption that President Assad would soon realize that a propitious escape would be the wisest choice. However, the speculation never transcended a merely idle notion. Thanks to Iran, China and Russia, Syria stood firm and a West-prescribed recipe for the so-called peaceful transition of power never materialized in the country. Quite unexpectedly, the plans of Syrian opposition fell apart on the eve of Doha conference. The initiative so vehemently backed by the West to form a united Syrian opposition practically went to waste on Wednesday night as the key opposition movements from inside the country pulled out. Opposition groups were scheduled to meet in Doha, the capital of Qatar on Thursday in order to appoint a new and strong leadership. However, three dissident bodies suddenly decided not to attend the meeting.

“There are too many people against this initiative for it to work now,” said a western diplomatic source in Doha.

Needless to say, the failure of the plan dealt a humiliating blow to US Secretary of State Hillary Clinton who was the one to announce it so unexpectedly as well as to Britain which had strongly supported the initiative.

It seems that the West and its regional allies are incapable of building a united front against the government of Bashar Assad.

In addition to the efforts of the West and its allies to take control of Syria, there is yet another danger which gravely threatens the country to an inconceivable degree: the influx of the Salafi-Jihadists into the country. Last February, al-Qaeda’s leader Ayman al-Zawahiri, who is reportedly in Jordan, urged his followers in Iraq, Jordan, Lebanon and Turkey to rise up and support what he called ‘their brothers in Syria’.  Also, Abu Muhammad al-Tahawi, a leading figure in Jordan’s Salafi-Jihadist movement, told the BBC that “jihad in Syria is obligatory for any able Muslim in order to help his brothers there.”

The fact is that the al-Qaeda-affiliated Salafi-Jihadists have already swarmed into the country and are already fighting against Bashar Assad’s government; among the killed, some have been identified to belong to the Salafi cult. The grand plan is to turn Syria into a safe haven for the Salafis who are responsible for beheading Syrian troops and civilians. Ghastly videos have recently circulated on the internet, showing the Salafi-Jihadists beheading Syrian troops and civilians in cold blood.

Parenthetically, beheading is a ritual act rather than a way of killing in war. The act of beheading contains a symbolic meaning: the victim is relegated to the degree of a beast and he should be treated likewise. Further to that, this act of brutality inspires an atmosphere of horror and commotion in the viewer and quenches the bestial thirst within the decapitator.

From an anthropological point of view, many societies used to revere the head as the seat of wisdom and consciousness and believed it must be connected to the body in order for the soul to travel into the hereafter. Without it, the spirit would keep wandering restlessly. Based on this perception, the act of beheading is to be taken to imply that the victim would never regain peace as his/her spirit would wander for all the time to come.

After all, a display of atrocities has manifested itself in grisly different forms on the part of the insurgents in Syria. On Saturday, humanitarian organizations condemned video images of rebels executing captured Syrian soldiers after insurgents overran army checkpoints near the town of Saraqeb on the strategic highway linking Damascus and the port city of Latakia to Aleppo.

“This shocking footage depicts a potential war crime in progress, and demonstrates an utter disregard for international humanitarian law by the armed group in question,” Amnesty International said.

Rupert Colville, spokesman for UN human rights chief Navi Pillay, said this could amount to a “war crime” and that the video footage, showing soldiers pushed to the ground and kicked before being shot, can be presented as evidence.

In any event, a Syria without Assad would mean a country in the hands of the Salafi-Jihadists who will undoubtedly turn the country into a graveyard for the Alawites and the moderate Sunnis and a breeding ground for terrorism and extremism in the region. It goes without saying that the Middle East region is being systematically and consciously devoured by an act of extremism funded and promoted by Washington and some Arab regimes.

Even without envisaging any foreign intervention and the domino effect it will have on the region and on the world as President Bashar Assad predicts, Syria is being eroded from within and without by different forces which have mobilized despite the rift in their ideologies but each with a unique agenda.

The tug of war in Syria has long started and there is an immediate danger of engaging the entire region in this bloody broil.