Home Veterans Press TV: Why Else Did the CIA Spymaster Resign? 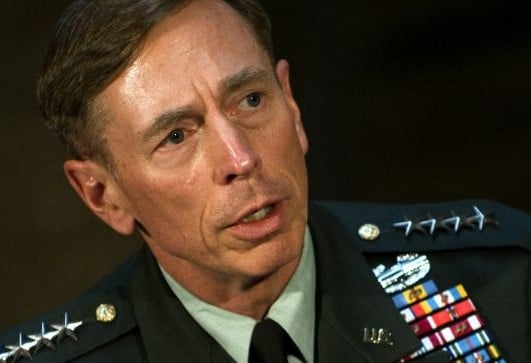 Why else did the CIA spymaster resign?

by  Gordon Duff  and Press TV

The United States is undergoing a political maelstrom that, in many ways, parallels what is currently going on in China.
Though the election ended days ago, a significant victory for Obama, perceived by most as a repudiation of American support for Netanyahu, the real issues are far more sinister.
Powerful forces within the government are reacting, not just to threats of civil war, assassination and domestic terrorism. There is a vast and well-orchestrated clandestine effort to centralize power behind the presidency, preparation likely to lead to an expansion in executive power.
All competing factions, Pentagon, State Department, CIA and courts face disembowelment by the Obama administration. Does this represent a change in American policy, both domestic and foreign, or is this a consolidation at the behest of the unseen ruling elites many claim controlled both candidates, Obama and Romney, equally?
Today, General David Petraeus resigned as CIA director sighting “poor judgment” in his personal life, an “extramarital affair” as the reason. No one believes him.A top American general, the “Patton” of our time, CIA chief and potential presidential candidate is now a broken man, career in ruins, supposedly over an affair with a female American intelligence operative.
From VT:

First, we are not ready to throw Petraeus to the wolves.

He came to the CIA in handcuffs, historically tied to the phony war on terror, his role in the “Sunni Awakening” which paid off Baathist terrorists who are now tearing Iraq apart.

Then there was his job in Afghanistan, having to clean up the mess made by Stanley McChrystal, who, with Richard Holbrooke, knows more about heroin than Arnold Rothstein ever did.

It is obvious that Petraeus was compromised by a foreign power or found to be involved in something so serious that he would destroy his career and reputation in writing rather than some other consequence, typically “suiciding” or arrest.

We share friends and all I know of Petraeus makes this, the most obvious conclusions, very difficult to believe. He is a man of humor and insight though very ambitious. 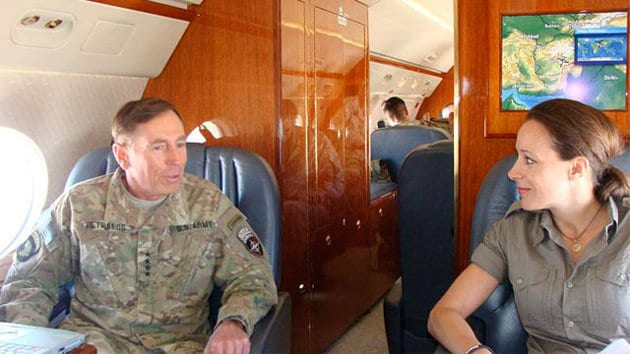 Who could have “set up” the Director of the Central Intelligence Agency?

Recently, Vice Admiral Gaouette, in command of the USS Stennis and her support task force including nuclear submarines, was “perp walked” off the flight deck of the giant American carrier, twenty miles off the coast of Iran, as though he were a common criminal.

Even President Obama admits his first term was unsuccessful. We can submit his actions to analysis; a man openly opposed to how the war on terror was waged has now increased drone attacks significantly and threatens military interference in Syria.

Conversely, he has been adamant in his refusal to support Netanyahu’s threats against Iran though his pre-election military display in the Persian Gulf may well have ended in disaster.

The removal of Gaouette is unique in military history with one exception, the firing of General McArthur by President Harry Truman during the Korean War.

Truman fired MacArthur for not just planning but preparing a nuclear attack on China and a full-scale invasion of the Chinese mainland.

With only one direct parallel in the last century, it is reasonable to assume that Gaouette was following in the path of former 5th Fleet commander, Admiral Cosgriff.

Gwyneth Todd, the former Chief Political Officer for the fleet, has publicly stated that she reported Cosgriff to the Department of State when she learned that he was planning false flag terror attacks against American troops in the Persian Gulf theatre and was planning to sail American warships well into Iranian waters.

To those who have gained a conspiratorial analytical hypothesis when examining the methodologies implemented by the mysterious command authority, the one that ordered the Air Force “stand down” on 9/11, the one that allowed a nuclear bomber to be stolen from Minot Air Force Base, allowing criminal elements in the government to openly take control of the reins of history, we submit the following:

The largely privatized military/intelligence complex, driven by criminalized monopolies in narcotics, banking, oil, arms, pharmaceuticals and human trafficking has, without any question, gained control of the operations of most agencies of government, of all national economies and all media, be it news or entertainment, in the West.

That this range of control, a misinformed electorate confined to voting for political candidates constrained to be no more than actors on a stage, has created a climate where anyone speaking with clarity, not just today, but as long ago as the First World War and every major conflict thereafter, would be labeled a “monster.”

Today, the news is General David Petraeus. It is now obvious that he agreed to be kept on until after the election. His punishment, total self-destruction, shooting himself might have been a kindness, is difficult to fathom.

What could he have done? Andrew Breveik, the pro-Israeli mass murder of Norway has suffered a kinder fate for the murder of 77 children.

There is clearly an information void. Most “professional” news sources serve an agenda. Some, Press TV being one, serve an Iranian target audience and, on the whole, serve a unique, accurate and balanced view of the rest of the world.

Thus, they are banned, stricken from the air and stand accused. I was accused, last week, of “working for the Iranian government” in having my writings carried by Press TV and for agreeing to take part in talk shows and political debates.

I nearly laughed myself to death. I am an American defense contractor and counter-terrorism specialist by profession. However, with 43 years of experience, I am unlikely to be led around by the nose and much less likely to be pushed or threatened.

There is a threat to the world. It is not Islamic extremism or even Americans gone crazy as they do each election, stirred into a self-destructive mental “haze” through third-rate propaganda.

Were America and the West simply Machiavellian, those of us trained in what the British once called “the great game” might understand. Now no one understands. We are living with chaos, either that or political systems bent on only entropy.

Thus, we examine the mosaic, what we can know, discard the analysis we are fed, knowing it is always false, always deception, “wiki-deception,” and look for what we cannot see through the analysis of what we are not told, of what we don’t see, of what is avoided, not what is shown.

This is our only tool set, our only view of the world other than conjecture, “Imagineering” or accepting the garbage we are fed.

One thing is clear, Obama is not entering his second, his last term as president without taking advantage of the fact he no longer needs to be concerned about election.

What he also knows is that his predecessor left him with vast extra-constitutional powers, the Patriot Acts, FISA (some), the NDAA provisions and suspension of habeas corpus.

What has been telling, what has added to the mosaic, has been the failure of a “liberal” president to disassemble the tools of oppression.

Then we face the question, Is President Obama entering on a phase of building a “legacy” of economic stabilization, of peace, of stability or is he going to “vacation” his way through his political life as George “W” Bush had done?

The other aspect of the mosaic is inextricable. Is President Obama currently in the process of “cleaning house” toward an agenda? Does he plan to attempt to influence Israel’s politics as they attempted to rig America’s election?

If unsuccessful at that, will, as many suspect, Israel be “quarantined?”

It has become clear that, under the guise of misrepresentation, there are those advocating service to Israel, to Wall Street and the drug cartels and “wrapping themselves in the flag” as we call it.

They, those former members of the military, current and retired, who are drawn toward being “groupies” for wealthy (and violent) extremists, are selling their souls for a crust of bread, a glass of scotch and the services of an underage prostitute of indeterminate sex.

I know enough of these to fill an arena. They are long on talk, usually drunk; few have more than five minutes of facing danger in military careers that spanned decades of seat warming and petty theft.

As we speak, their expertise, not so much in education or intelligence, not so much in physical prowess or agility but rather steeped in treason, in anger, in self-deceit and greed, these groups are raising funds to attempt to overthrow America’s government.

Donald Trump and Ted Nugent, who, at the word of Willard Romney’s landslide defeat smeared himself from head to foot in human feces, the same way he avoided military service during the Vietnam War, this pair and others, human vermin, plan to divide America.

The threats are there, our question is whether they are recognized and the force is used to keep the American union as one, even if all of Wall Street is dragged off to prison and every corporation that has moved overseas is repatriated and taxed into the oblivion it deserves.

The signs, the mosaic, be it the obscure and inexplicable exit of Petraeus or the upcoming demise of others we hear are heading for the “chopping block,” are clear.

America will change, it has changed. Rot set in long ago. Perhaps amputation is a cure.

It may well have begun, on a piecemeal basis. Perhaps it can grow. I have a list.