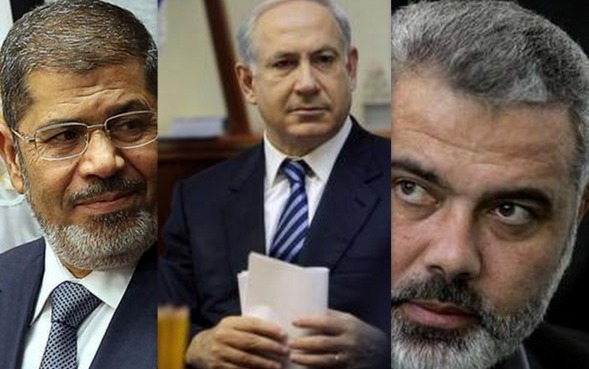 What is taking place right now in Gaza, which is being unwittingly blown out of proportion, has been waited for by all the parties involved in the conflict.

I don’t think the Israelis meant to turn this usual routine of aggression into an all-out confrontation with the Palestinians, when the current Israeli government and its prime-minister have a new term election coming up around the corner, but new threats coming sraight from Sinai made them change their mind.

Tel Aviv only wanted to test the waters of the post-Arab spring and to find out if Israel, under the new political evolving scene in the Arab world, could carry on with the old business as usual.

And I believe that the politicians in Gaza have been waiting for a chance for a real escalation with Israel to also find out how the new leaderships in the neighboring Arab countries will react, mainly Egypt.

And also this time the conflict in Gaza involves, and for the first time, a new major player who has also been persistently working to build up the tension between Gaza and Israel just to announce its presence on the Arab-Israeli operation theatre, namely the Islamist Mujahideen cells acting inside Sinai. Actually we have to give those Mujahideen the credit for launching the first round of long range rockets at Israel last Wednesday.

Watch the video posted on YouTube by “council of Shoura brigade” stationed in Sinai, filming the remotely controlled firing of the Katyucha (107) rockets at Israel last Wednesday 14 November

It’s another attack on Gaza, nothing new; the world has grown numb from the endless news of repeated Israeli attacks on the Gaza strip that usually end up with the same big fat nothing and the boring Israeli Jazz of “Israel has the right to defend itself“.

The scenario has always been predictable in any of the repeated Israeli-Gazan conflicts; accusations from both sides claiming that the other side was the one to start the attacks. The picture in Gaza hardly changes; chaotic scenes of bombarded neighborhoods with innocent civilians hit during the Israeli raids followed by long lines of funerals and dead victims, the people of Gaza like to refer to as martyrs.

Meanwhile the scene in Israel is usually different; sirens are blowing all over the southern area that is in the known range of the Gazan rockets. Actually some of the primitive type of rockets that the Gazans used to have, or manufacture locally under the used-to-be tight Israeli siege, would actually manage to make it all the way and land astray somewhere near one of the southern settlements.

And the dim chance of one of those mal-targeted rockets to make it to the other side has always been the wildest dream for any Gazan militiaman or politician of how to respond to the repeated Israeli air raids and shelling of this wretched strip of land called Gaza.

But during the last days and while we’re might be witnessing an old/repeated scene between Gaza and Tel Aviv, but this time around, the scenario is so different that it signals not only new channels that have recently provided Hamas with long-range rockets but also heralds new rules and policy in the Arab-Israeli conflict as a whole.

I won’t talk here about what most of us already know from following the mainstream media news and its coverage of the latest military escalation between Israel and Gaza but I would like to point here at the new Egyptian stance in this conflict and what it means to Egypt, Palestine and Israel.

It has been few months since, Mohamed Morsi, the newly elected president in Egypt took office and during that short period the popularity of Morsi, one of the top officials of the Muslim Brotherhood -MB, has been steadily taking a downhill path especially amongst the seculars and the Copts.

Egyptians have pulled the 2011 revolution to demand mainly for economic and political reforms, but what we have here in Egypt and after the toppling of Mubarak is a government of Islamists who wants to enforce the sharia law, incompatible with modernity and human rights as it is, and to form an Islamic emirate in the Arab world that would hopefully incorporate other countries/emirates like Gaza, Syria, Jordan, Sudan, Libya, Tunisia and of course Egypt.

The latest development in the region where the Islamists have taken over in the wake of the Arab revolts and specifically the developments in Sinai reflects this strategy.

The Egyptian peninsula has become the hub for worldwide mujahedeen with whom Mohamed Morsi was imprisoned during Mubarak days and a refuge for members of al Qaeda whose illegal operations and the training of their armed militias in Sinai have been facilitated by the Egyptian security forces who were indirectly told, by a tolerant leadership, to simply look the other way.

Sinai has become the new route for smuggling heavy weaponry from the Islamist militias and smuggling lords in Sudan all the way to Hamas, and moreover, the North Sinai land adjacent to the borders with Gaza is being sold in an unprecedented rate to Palestinians in an alarming indication of the looming possibility of setting the stage for Sinai to be the future camp for harboring Palestinians should an Israeli land incursion take place. A very convenient scenario for the Israelis that makes us wonder about the role of the Mossad and whether it actually managed to infiltrate those cells of Mujahideen.

What is dangerous about the Muslim brotherhood bid/dream is that it negates the essence of the Egyptian nationality/citizenship and identifies the Egyptians not as equal citizens with equal rights who share the same culture and history of an ancient nation but as Muslims who share with other Muslims, who in that case might be from anywhere; from Afghanistan in the far east all the way to Morocco in the west, the same sharia and Quran.

The latest Egyptian support for Gaza is highly commendable, but unfortunately it comes in a time when the Egyptian presidency lacks, severely, the popular support and the Egyptian society couldn’t be more divided over the MB government and its disastrous bid for applying sharia and allowing along the way to turn Sinai into the new Afghanistan with Mujahedeen from all over the Muslim world pouring in with their smuggled heavy weaponry and heavier plans to launch the Islamic emirate project from there under the very nose of Morsi and his government and military.

What is sad in the latest Israeli attacks on Gaza, besides the unnecessary human loss of course is the fact that we now hardly hear the word ‘Palestine’ anymore in the conflict with Israel. All we hear is Gaza. And this is actually quite an achievement on the Israeli part. It seems that their ongoing plan of the ethnic cleansing of the Palestinians and the destruction of their nationality is working fine according to plan.

It also seems that the people of Gaza have fallen for the trick and swallowed the Israeli bait as all the flags that were raised during the last few days in the protests over the attacks and during the funerals of the victims were the black and the green flag of the Islamic emirate. Maybe once or twice were we able to randomly spot the flag of Palestine.

Even the dead victims, martyrs, have been shrouded in the green flag (adopted by Hamas) of the Islamic Emirate.

The diminishment of the national pride/consciousness is a very grave sign/sin of an evolving and looming (religious) extremism in the Arab-Israeli conflict.

The conflict now is steered by Zionist maniacs, psychic mujahedeen, Wahabi sheikhs with ceaseless flood of petrodollars, intelligence agencies, and amateur politicians who could change the geo-politics of the region and drive it into a devastating and large scale war.

But at the end of the day, none of this could have happened without Israel and its aggressive entity and its extreme thinking of establishing a home, based on religious grounds, for the world Jews on the land of Palestine. The least thing we could expect in return, though it runs counter to the hopes and visions of the secular nationalists in the Arab world, is an Islamic emirate to encircle this Jewish entity, aka Israel.

The story of Gaza used to be a sad story but it is getting to be even gloomier after the so called Arab spring ( currently being hijacked by fanatic Islamists).