Home Government Does Anyone Seriously Think it’s About Rockets? 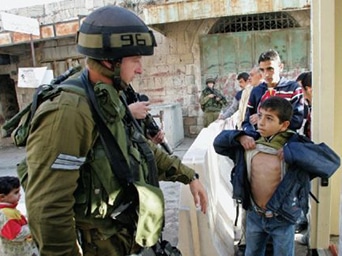 “They stole my land,

But I am to blame: I shot a rocket back.

So they stole more of my land,

These words are printed on a tee-shirt I sometimes wear. They cut through the

propaganda crap straight to the true cause of the latest unpleasantness in Gaza.

This morning (Sunday) the BBC continued its descent into the journalistic cesspit, pushing the Israeli line on the atrocities being committed in the Holy Land. You only needed to see BBC1’s ‘Sunday Morning LIve’ which matched an incoherent Palestinian newspaperman against Charlie Wolf, an obnoxious import from Boston USA. Nobody touched on the underlying causes, not even the presenter Samira Ahmed. It was ignorant and shambolic, yet on the basis of this encounter viewers were invited to vote whether the Israeli bombing was justified.

According to Wiki, Wolf during his talkSPORT show in 2005 described Rachel Corrie (the American activist murdered by an Israeli military bulldozer in Gaza) as “scum.” OFCOM ruled his remark was in breach of the “Generally Accepted Standards” section of the Broadcasting Code and said it was “seriously ill-judged”.

Why would the BBC hire such an offensive pillock if it intended to provide a reasoned and balance debate? I certainly object to having the likes of Wolf beamed into my home on a Sunday morning, or any other morning, by our fee-snatching national broadcaster.

I hear that when the poll result was announced 56% voted “No” and 44% “Yes” to the question “Are Israeli military actions justified?”. The programme’s website now states the results “are not available to the public at this time”. The plot thickens…

But it’s not so difficult to figure out when the Controller of BBC1 is Danny Cohen, a Jew. Such a surprise….

According to the BBC

An earlier BBC1 offering this morning, the Andrew Marr Show, had General Mike Jackson calling Hamas what they actually are – guerrillas. He deliberately avoided the well-worn and inaccurate propaganda slurs such as “militants” and “terrorists”. If you call them that, what names are left for the Israelis? I wonder if he’ll get his knuckles rapped…

Marr made his leanings clear by saying: “From a military perspective people have to remember how small Israel is and how open to rocket attack…” without mentioning Gaza’s much greater vulnerability by not only being tiny, impoverished and overflowing but having no military to speak of at all

Throughout the latest crisis western leaders, news readers, chat-show hosts and assorted pundits have focused on the “thousands” of rockets fired by Hamas.

White House Press Secretary Jay Carney is reported as saying: “There is no justification for the violence that Hamas and other terrorist organizations are employing against the people of Israel. We call on those responsible to stop these cowardly acts immediately in order to allow the situation to deescalate.”

Cowardly acts? Who is the coward? Israel, which uses sophisticated state-of-the-art weaponry (courtesy of the US taxpayer) to relentlessly attack an unarmed, half-starved and densely packed population who have nowhere to run because their borders have been sealed 24/7 for 6 years, or the Gaza’s guerrillas who fight back with anything that comes to hand including garden-shed rockets?

What if Hamas dumped all their rockets in the sea tomorrow? Would the illegal blockade be lifted? Would Gazans enjoy the same freedoms as other nations? Would their democratically elected government be allowed to get on and govern? Would they be able to open their sea port to foreign ships and rebuild and operate their airport? Would they be able to import and export and carry on trade and develop their economy and prosper like other countries?

Would they be allowed to develop and benefit from their offshore gas field? Would their fishermen be allowed to fish in unpolluted waters? Would their young people be able to come and go and take up places at foreign universities?

Would Israel clear out of Gaza’s airspace permanently? Would the Israeli navy cease its piracy and stay out of Palestinian territorial waters? Would you and I be able to visit Gaza direct?

Fat chance. None of this would suit Israel. So Palestinians would be no better off.

Remember, there are no rockets coming out of the West Bank. Yet the illegal Israeli occupation there continues and so does the ethnic cleansing, the land theft, the illegal settlements, the colonization, the demolition of Palestinian homes, the throttling of the economy, the abduction and ‘administrative detention’ of civilians and the massive interference with freedom of movement. Nothing has changed for West Bank Palestinians who DO NOT FIRE ROCKETS. And there is no sign of an end to their torment.

The bloody assault on Gaza therefore has much more to do with Israel’s ambition to expand racial dominance in the Holy Land, make their occupation permanent and seize Gaza’s offshore gas field than the paltry damage from crude and erratic rocket-fire. The Palestinians holed up in Gaza are simply in the way of the Grand Plan and have to be removed or totally subdued. This was the case 4 years ago when Israel launched Operation Cast Lead after staging the same sort of provocation as they did last week.

If he carries it out he’ll have written his arrest warrant for mega war crimes. Obama, Cameron and Hague actually pledge support for this maniac and his loathsome pals Netanyahu and Barak, implicating us in their foul crimes. I’d like to subject Obama, Cameron and Hague -and their families for bombing engulfs women and children also- to just one night of the London blitz and see how they like it. London at least had defences, functioning emergency services and an extensive subway network. Gazans don’t. And Gazans have had to put up with raids night after night for years on end.

Actually I’d like to include the entire United Nations Security Council in that experience, also its useless worm of a secretary-general.