Home Veterans 6.99 Billion People Side Against Israel and Gaza Murderers 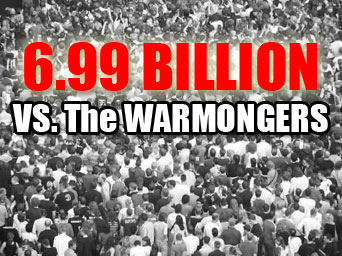 Today in Israel, we saw a civilian bus attacked outside an Israel military installation. So far, no deaths but many injured.

And over the last 4 years, thousands of Palestinian civilians have died from the hands of the Israel military.

Here listen to the what a Minister from Israel says about the killings today in an interview with RT;

Like me, did you hear the same ole “we are the victims and the other guy is inconsequential without any respect for the life of the other guy”?

I don’t know, to me, all I hear is the same 20th century politically immature “we are the good guys and they are the bad guys” non-cents that continually perpetuates the wars and violence. It’s precisely this type of arrogance and lack of acknowledgment that the other is, in fact, your human global brother that put us all at risk.

For those Israeli supporters reading this, hold on to your shorts! That does not excuse any killing of any Israeli by any Hammas leader. Period! Notwithstanding the Occupation, they are just as guilty.

To make it more succinct for you….grab on to this new reality paradigm that is here and coming fast….

Now, say it with me! ONE LOVE! Okay, got it? That means it’s us vs. them with us the 6.99 billion people in the world who just want to live without all of this war, killing, and violence garbage. We are the overwhelming silent majority!

So who are .01 billion who want violence and war?

Well, it’s time we all learn the truth about our world and system.

These elite peoples are not like you and me. They are in the war business and they love it when Israel has to spend 650 million dollars paid for by U.S. Taxpayers on a missile defence system (Iron Dome) that they have to install on their border with Gaza. The U.S. workers wage slave for it and they get the war profits from it. It’s a super great system if you’re a war biz guy.

In the USA. the number one industry is war. And the global elite run that operation creating wars when things are too quiet so they can move their product.

As for the people in Gaza, from a business point of view, they are just target practice; a worthless people. To the civilians in Israel, it’s best to keep them in fear for it helps the system by keeping them militarized. It also helps to sell them arrogant chosen people non-cents so that they keep pushing the war envelope! In other words, they remain outstanding clients for the system.

In short people, we JA PEOPLE, have been cluster f%cked by the global elite. War is good for their business and we, the 6.99 billion of the world, are its real victims. And it really sucks!