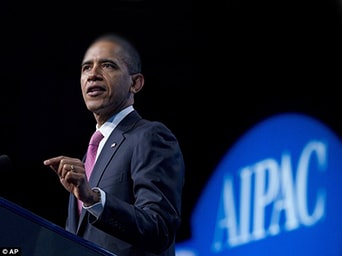 “Behind the plotters are drug cartels that have penetrated the US government, former lobbyists who were moved into government during the Bush administration and now are suspected of being involved in a coup attempt.”

Seventy hours ago, at this writing, while on Air Force One, President Barack Obama issued a press release that has been utterly ignored by the Western Press.

The president has openly announced a move against violent plotters inside the US government and espionage agents. He does not use the terms “AIPAC” or “the Israel lobby” but it is highly unlikely he could be referring to anything else.

In fact, we can think of no other group.

I was privately briefed on some of the reasons behind this document. On what is known, not “surmised,” I will explain:

There is, currently, within the US military, the Executive branch of government and among extremist “power brokers” in America an active plot to “alter” America’s form of government through “decapitation.”

Let me be clear. Where the memo, printed in full below, refers to “violent”, it means “assassination” of many top leaders in America including but not limited to the President, Vice President, Secretary of State, Secretary of Defense and others.

The plot makes use of the resources of major private defense contractors and their intelligence and special operations personnel. There has been active recruiting that has been noted and is why the memo was released and why many members of the military have been subjected to investigation.

The Benghazi attack was planned and financed by this group.

Many writers in the alternative media have noted much of what is going on but not all. Some have shown access to very knowledgeable sources.

Behind the plotters are drug cartels that have penetrated the US government, former lobbyists who were moved into government during the Bush (43) administration and now are suspected of being involved in a coup attempt.

There is no direct evidence tying any foreign government to this plot though most are “fanatically” aligned with the militant Likudists in Israel under Netanyahu’s regime.

The President’s text below, unedited: 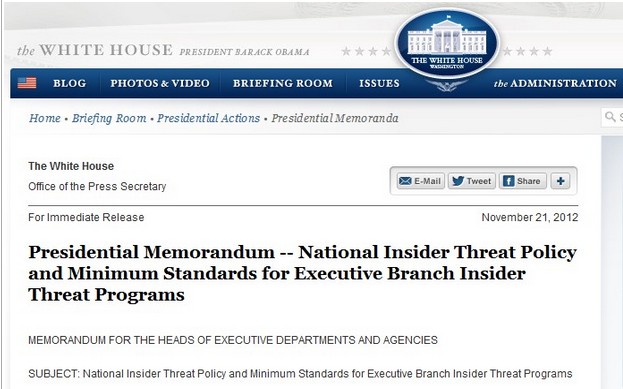 The White House Office of the Press Secretary For Immediate Release

Memorandum for the heads of executive departments and agencies

This Presidential Memorandum transmits the National Insider Threat Policy and Minimum Standards for Executive Branch Insider Threat Programs (Minimum Standards) to provide direction and guidance to promote the development of effective insider threat programs within departments and agencies to deter, detect, and mitigate actions by employees who may represent a threat to national security. These threats encompass potential espionage, violent acts against the Government or the Nation, and unauthorized disclosure of classified information, including the vast amounts of classified data available on interconnected United States Government computer networks and systems.

The Minimum Standards provide departments and agencies with the minimum elements necessary to establish effective insider threat programs. These elements include the capability to gather, integrate, and centrally analyze and respond to key threat-related information; monitor employee use of classified networks; provide the workforce with insider threat awareness training; and protect the civil liberties and privacy of all personnel.

The resulting insider threat capabilities will strengthen the protection of classified information across the executive branch and reinforce our defenses against both adversaries and insiders who misuse their access and endanger our national security.

To some, at a glance, this might actually sound like a response to leaks within the CIA and White House except for some extraordinary language. Please make very special note of the following:

“…to deter, detect and mitigate actions by employees who may present a threat to national security…These threats include…violent acts against the Government and the Nation…”

Please note that they refer to “violent acts” and speak of both the “government” and “nation.”

By “government,” they are indicting, with no “wiggle room,” assassination plots.

By “nation,” they may well be referring to false flag terrorism that may well include use of weapons of mass destruction. Britain was subject to such a threat during the London Olympics, one that would never have been successfully overcome without the help of journalists who put themselves at great risk.

The US government has had a twelve-year moratorium against arrest and prosecution of spies within our government and military other than those who can be tied to China.

The most famous Chinese “spy” was Wen Lee Ho, a nuclear scientist at Los Alamos Labs. He was arrested in 1999, held in solitary confinement for a year and then released.

In order to get an accurate picture I phoned two friends, one a senior FBI counter-intelligence operative and the other a very senior US Army intelligence officer.

The question I put before them, while eating breakfast, was:

“Please list the nations that represent the greatest threat of espionage against the United States and, which nations, in order, are believed to represent the “penetration threat” that President Obama is referring to.”

From the FBI, their appraisal not intended for the “pop culture” media:

“Our greatest direct threat is Israel and the Israel lobby. They have systematically penetrated every aspect of government and the military and, if they cannot get documents from those branches, friends in congress will give them access to anything that branch has available. After that is India, with every research facility at risk from RAW (Indian Intelligence) penetration and then Cuba, Mexico and Turkey.

The primary end users of this intelligence, the “clients,” are Russia and China.”

From the US Army:

“I agree with Israel and the rest but we have not had Turkey on our radar. The obvious end users are, of course, Russia and China based on capability.

The issue I have is how a presidential press release, an extraordinary and almost “draconian” document has gone without an uproar from congress and wide press coverage. Who has the power to suppress reporting on something like this, though, I know that you will say it is Israel, I would want proof.

Though there has been no official notification of this, I am of the impression that we now consider any mention of Israeli spying to be highly classified. Only Russia and China are officially listed, entirely out of concern not to offend lobbyists whose feelings outweigh real issues of national security.”

Then I turn on my television, hour after hour of TV shows about espionage and terrorism. Both American and British TV are the same.

All spies are from Iran and Pakistan; nations that our actual intelligence agencies indicate represent no espionage threat to speak of.

In fact, in my two Saturday morning phone interviews, which can, of course, be confirmed by Homeland Security who has tapped my phones, I have reflected with great accuracy. Thus, we ask you to read what President Obama really did not say “between the lines,” the message is quite clear.

We do not see a roundup of AIPAC spies, not like in the early days of the Bush administration although Attorney General John Ashcroft quashed that investigation.

What we are seeing is a hunt for traitors within the American government and military, some of which is working its way onto the news.

The question of the moment, however, is this:

How can a President of the United States announce that the government is infiltrated with terrorists and spies and no newspaper, television network or other form of media notices?