Home Government US at UN – An Act of Infamy 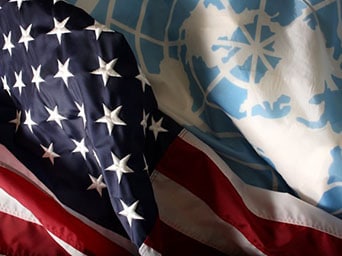 One more time an American administration shamed America and shamed the American people (minus the Jewish leadership and community) and proved itself a client/vassal state of Israel, and that it is not sovereign state when it comes to the Middle East, occupied as Gaza, the West Bank and the Golan Heights.

Obama’s administration is once more on the wrong side of history and freedom.

Once more the US proved it is biased, unfair, unjust, hypocrite, certainly unfit and unqualified to be an honest broker for peace in the Middle East.

The US have always entrusted and subcontracted its policies and negotiations to a bunch of Israeli-First members of the White House, National Security, State and Defense Department, and with reckless disregards to the nation and people’s interests. America could never be the fair and honest peace broker it claims to be.

For the Palestinians the decision came some 65 years too late waiving the right to an almost 50% granted by the UN and accepting 12% of what remains of Palestine if we are to count to the 58% (Area C) ceded to Israel by the Oslo Team.

With this vote, Mahmoud Abbas rather than rush to the negotiating table with his side kick Saeb Erekat and Yasser Abed Rabou, should disband the PLO and its Executive Committee as lacking legitimacy among Palestinians and is nothing but a political, financial and criminal mafia.

Abbas should immediately and without delay, disband the Palestinian Authority as manager of the Jewish Occupation, revoke the unconditional recognition he and Arafat gave to Israel under Oslo. Revoke Oslo and admit Oslo as nothing more than a fraudulent crime perpetuated against the Palestinian people designed to save a failing corrupt and bankrupt PLO and its leadership and should sue Israel for the value of services rendered all these years. He and the PLO can keep the proceeds.

More important Mahmoud Abbas should resign as head of a failing organization. The Palestinian people under Occupation and in the Diaspora should now take the lead and take charge of the future, leaving the PLO and its leadership to the dust pin of history. The people had enough of Arafat and Abbas and their team and no longer trust this leadership to do any good.

Since Oslo, the PLO/PA saved Israel over $55 Billions in operational costs of the Jewish Occupation, money that Israel should have taken responsibility for. This leadership has nothing to show for except perhaps several thousands of VIP passes, fat bank accounts for the leadership, fancy multi million dollars villas, expensive cars and expense accounts, looted economy and treasury, corrupt incompetent administration and of course the more than 550 security checkpoints and hundreds of thousands of hectares lost to Jewish settlers. The people under Occupation are much worst off now than before Oslo.

I pray that the Obama administration and Congress to stop funding the Palestinian Authority, Mahmoud Abbas and his $1.4 Billion security forces with the job of keeping the Occupied Territories safe for the IDF and the criminal Jewish settlers and thieves.

In any case this money the US gives to the Palestinian Authority it is an indirect support and funding of the continued Jewish Occupation.

I also pray that Arab countries stop funding the Palestinian Authority as manager of the Jewish Occupation knowing well that every dollar contributed is a dollar saved for Israel. Time to let Israel bear the financial burdens of its military and settler’s occupation in the same way it reaped the benefits of Oslo.

Oslo as negotiated by the Palestinian leadership is nothing short of criminal negligence and those who negotiated and signed it should stand trial for the crimes they committed.