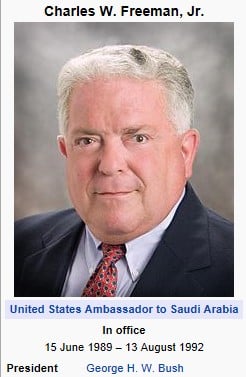 Freeman’s name had been put forward to take over as National Intelligence Chief after a stellar career, serving all American presidents from Nixon onward.

Freeman’s nomination was, as he openly stated, squashed because of his unwillingness to take orders from Israel.

Freeman doesn’t speak often enough.  He is, by far, the best qualified candidate for Secretary of State, to replace Hillary Clinton but, again, the Israel lobby, wounded though it is, would prevent it.

Out of ignorance, little does Israel know that only Freeman or someone of his caliber and no one we can think of at this moment qualifies, could save Israel from itself.

If you read the short intro here, watch as much of the video as you can.

Note that Freeman is a traditional “Washington insider” but also someone who has put America first.

Early in the video we note Freeman’s statements about the performance of the Iron Dome system, opinions that vary considerably from reality.

Few in Washington get quality intelligence but, if there were someone to put quality material before the public, it is Freeman.

This is one of those rare times.  Watch the video.

Charles W. (“Chas”) Freeman, Jr. (born 1943) is an American diplomat, author, and writer. He served in the United States Foreign Service, the State and Defense Departments in many different capacities in the past thirty years,[1] with the Washington Report on Middle East Affairs calling his career “remarkably varied”. He most notably worked as the main interpreter for Richard Nixon in his 1972 China visit and as the United States Ambassador to Saudi Arabia from 1989 to 1992, where he dealt with issues related to the Persian Gulf War.[2] He is a past president of the Middle East Policy Council, co-chair of the U.S. China Policy Foundation, and vice-chair of the Atlantic Council.[3] In February 2009, unnamed sources leaked to the news media, initially to The Politico, that Freeman was Director of National Intelligence Dennis C. Blair‘s choice to chair the National Intelligence Council in the Barack Obama administration.[1] After several weeks of criticisms from prominent supporters of Israeli policy, he withdrew his name from consideration and charged that he had been the victim of a concerted campaign by what he called “the Israel lobby”.[4]