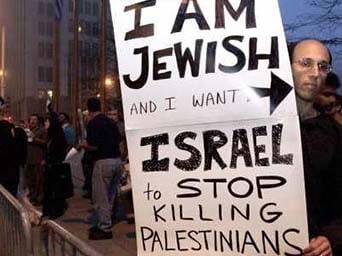 As Israeli Jews and Jews around the world celebrate Chanukah, which is an eight day commemoration of the rededication of the Second Temple when the Maccabeans revolted against their Greek rulers, perhaps it is also time for Israeli Jews and Jews around the world to use this occasion to rethink their position on peace for Israel and peace between Arabs and Jews. Perhaps the Jews can use this holy occasion to revolt against Zionism, which like ancient Greece is oppressing Jews and Judaism, and stand between them and peace, peace with Arabs and peace around the world.

The story of Chanukah is one of “revolution and miracle” and perhaps this coming year Jews can produce a revolution and a miracle, among themselves, among others certainly within Israel. Jewish communities in the United States, England, France and Germany, the backbone of a die-hard Zionist Israel can make a difference. These communities can stand on the side of peace and can influence governments within these countries to pursue a course that can bring peace for Israel and peace for the world.

Too many people died on both sides. Scores of Israeli died, thousands of Americans and Europeans died, and millions died among Arabs and Muslims. Too many wars for Israel, too many wars for America, war in Iraq, in Afghanistan and we hope no war on Iran. America, Israel and the world could not afford more wars for Israel. Time for the international Jewish community to stand up and be counted among those who wish for and work for peace.

Israeli Jews also decided to celebrate the greatest show of firepower Israel is able to produce. Thousands stood near the borders with Gaza, celebrating the destructions of Gaza by their powerful Israeli force and their well equipment army of thousands of tanks, thanks to America’s money and weapons. They celebrated as tank commanders directed their shells inside homes where there are no fighters, just for the hell of it. They even killed the family of a Palestinian physician as they sat in their living room while the father was talking to Israeli television. It became clear the tank commander wanted to make a statement by killing three daughters of Dr. Izzeldin Abuelaish.

“Dr. Abuelaish was the first Palestinian doctor to receive a staff position at an Israeli hospital, where he treated both Israeli and Palestinian patients. Immediately before the war he was a researcher at the Sheba Hospital in Tel Aviv[4] and already an important figure in Israeli-Palestinian relations.[5] The death of his children strengthened his resolve to promote reconciliation between Israelis and Palestinians.[6] He is currently Associate Professor of Global Health at the University of Toronto.” “ Wikipedia.

Israeli tank commanders made sure they target farmers working their field posing no threats to Israeli soldiers. The Israeli army targeted schools; hospitals and food supply depots with deliberate acts of hate, racism and vengeance. There is no other way to justify the way Israel went about its Cast Lead operation 4 years ago, about the same time as Chanukah.

Israel tends to use past “biblical events” for its many operations against Palestinians. Operation Cast Lead in 2008 and Operation Pillar of Smoke in 2012.The last war on Gaza also was casted in biblical terms with reference to Exodus when Jews were guided in their journey by smoke in daytime and pillars of fire at night. And yes indeed, Gaza was let up with both smoke and fire at the same time day and night, but there was no exodus for besieged Palestinians.

There is such a strong support for wars among Israelis and international Jewish community specially that of the US. According to Haaretz survey during this last War on Gaza, 90% of Jews supported the war on Gaza. While there are no specific numbers among Jews who support Israel’s wars, reading comments in Haaretz, in Washington Post and in other journals, one can see such an intensive support for Israel’s wars and for Israel’s right or wrong.

Perhaps it is time for Israel and the international Jewish community to rethink their position on Zionism, on Israel and on peace with Arabs and Muslims. Contrary to what is being claimed, there is no historical enmity between Jews and Arabs and no historical enmity between Jews and Muslims. In fact contrary to what die hard Zionists claim, to poison the hearts and minds of Jews, the golden age of Jews was during the Muslim empires when Jewish citizens of the empires were appointed ministers and advisors to the Caliphates and enjoyed peaceful life without the racism they experienced in Europe.

Jews never enjoyed the freedoms and benefits of citizenship as they enjoyed in the Muslim world, from Muslim Spain to Khorasan. Perhaps it is time for Jews to compare their status within the Muslim world to that of Christian Europe, where Pogroms and Holocaust took place against Jews. Personally I never could understand such hate and anger against Muslims and Arabs. The conflict began and with Zionism and will end with the end of Zionism.

On the other side, time for Palestinians also to think of peace, a peace and reconciliation between Arabs and Jews and a good start will be to support a One State where Jews and Arabs can live side by side, as equal, and as citizens of a state for all of its people. Happy Chanukah.