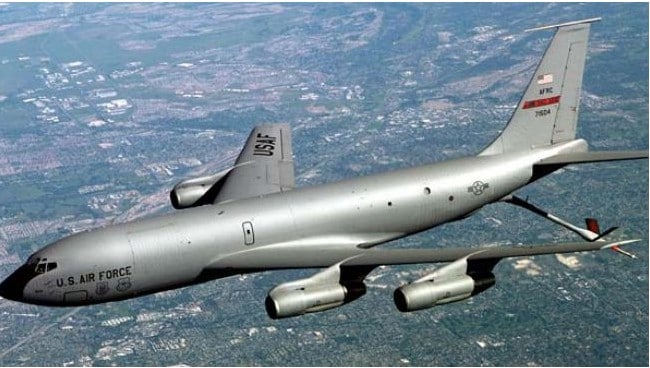 —
“There have been serious concerns as to good order and discipline since it was discovered that the Air Force Academy in Colorado Springs had been used as a recruiting ground for extremist sects. In a series of reports by the Military Religious Freedom Foundation headed by Mikey Weinstein, a litany of serious violations including indoctrination in extremist beliefs has become commonplace in the Air Force. The memorandum advised close monitoring of military and civilian branches of the government for threats citing both “vast espionage” and use of “violence.”
—

Recent intelligence sources have revealed that at least one and perhaps as many as three KC 135 Stratotankers have left the United States, traversing the Pacific Ocean, for use in refueling Israeli attack aircraft on missions against Iran.

Sources indicate that at least one of these aircraft, said to belong to a command of the Arizona Air National Guard stationed at Sky Harbor IAP/ANGB near Phoenix, may be the source of the missing aircraft.

That would indicate, were this the case, that the 197th Air Refueling Command Squadron was involved.

We have direct witness confirmation of one of these aircraft involved in behavior “outside any possible mission parameters.”

There have been serious concerns as to good order and discipline since it was discovered that the Air Force Academy in Colorado Springs had been used as a recruiting ground for extremist sects.

In a series of reports by the Military Religious Freedom Foundation headed by Mikey Weinstein, a litany of serious violations including indoctrination in extremist beliefs has become commonplace in the Air Force.

A further indication of a possible threat was referred to by President Barack Obama when, on November 21, 2012, while returning from his Far East trip, a memorandum was issued warning of “Insider Threats” against the “US Government and the nation.”

The memorandum advised close monitoring of military and civilian branches of the government for threats citing both “vast espionage” and use of “violence.”

The aircraft, scheduled to be replaced by 2040, were placed into service beginning in 1957. Their transit range is over 11,000 miles but is only 1500 miles when loaded with 75 tons of “transfer fuel.”

Each aircraft would be capable of refueling at least one squadron of fighter/bomber aircraft, a capability that would make a potential attack on Iran a possibility without violation of airspace of Turkey, Iraq or Saudi Arabia.

Turkey, who has eight of these aircraft, uses the KC 135. France also uses this as their primary air-to-air refueling platform.

No other nations in the region have air-to-air refueling capabilities that could make a mission from Israel to Iran a possibility. There have been no reports that either Turkey or France are missing aircraft of this type or is there “chatter” that participation, as an “actor” in an attack on Iran is considered possible by either of these nations.

Additionally, there is no known or even rumored “classified” agreement for the US to lend such aircraft to Israel for such a purpose, quite the contrary. Such an act would, as indicated by “informed sources,” constitute mutiny and treason.

The F 15 series including the “strike eagle”

Israel’s most advanced aircraft is the US built F 15. There are several variants but the “twin cockpit” F 15E “Strike Eagle” has the greatest range and weapons capacity.

Israel currently operates 25 F 15E Strike Eagles and approximately 40 other variants. The Strike Eagle, when carrying three external fuel tanks, can carry up to 8000 pound of ordnance. The F 15E has advance countermeasures and is capable of carrying “bunker buster” bombs.

Were Israel to use a “sea route” to attack Iran, using its F 15 aircraft, two refueling would be necessary, even with full external tanks.

Each refueling requires three tons of fuel, 10 total for each aircraft.

A single KC 135 aircraft may well be capable of this mission. Two would be much better. Three would be needed if fighter cover were to be used to suppress air defenses, what is called “Wild Weasel Missions.”

There has been considerable illusory and deceptive “chatter” that may well be part of a “deception and cover” program intended to disorient Iranian air defenses.

Over the past few months, several types of threats have been revealed which involve Azerbaijan. There have been reports that Israel had stationed attack aircraft at former Soviet airfields in Azerbaijan, aircraft that traveled through Turkey in transit to Azerbaijan during joint training missions while those nations were on publicly friendlier terms.

This mission and scenario, including transit of “bunker buster” bombs through Georgia, was reported in VT in 2010.

Turkey openly acknowledges that it had allowed Israel to run bombing practice inside Turkish air space because the terrain “matched that of Iran.”

Not long ago, two defecting officers of the Azeri military reported an agreement between Azerbaijan and Israel outlining the exact scenario reported by VT.

Meetings between the Iranian ambassador in Baku and the President of Azerbaijan drew a strong denial. However, it is also more than rumored that Israeli aircraft inside Azerbaijan had been “discovered” and required to return to Israel.

Last week, the London Times reported that Azerbaijan had agreed to allow Israel to use its bases to operate drones over Iran. The president of Azerbaijan both denied the charge and asked for a retraction from the Times.

However, only two days ago, there were further reports that, in fact, the drones were jointly operated by both Israel and Azerbaijan, and had been in place for some time.

There has yet to be a second denial to this new story that specifically outlines, not only the type of drone, but the vendors for the observation packages used as well, a prominent electronics supplier to the IDF.

In addition to the stories about Azerbaijan, there has been considerable “chatter” involving use of Saudi airspace. Recently, Saudi Arabia has been very involved in covert operations against Syria.

Today, it was discovered that Saudi Arabia had sent 200 prisoners sentenced to death to fight in Syria. Though this has not been fully confirmed, documents published today and intelligence from inside Syria supports this supposition.

The problem with a credible deception plan involving Saudi Arabia is that Iran could quickly, not only devastate Saudi Arabia but likely stage a full scale ground invasion that there would be no hope of resisting, even with American assistance.

Saudi Arabia has no credible military forces and any attack would quickly turn into, not only urban warfare but, even more likely, the immediate overthrow of the Saudi government by political groups not necessarily friendly to Iran but extremely hostile to the traditional despotic rule.

There is very little likelihood that American ground forces would be used to defend Saudi Arabia, a slave labor theocracy.

In the event of any threat to Saudi Arabia a popular uprising would begin and the kingdom would crumble in days.

In fact, other nations in the region would likely fall quickly, Bahrain, Kuwait, Jordan and possibly even the UAE.

Those who have chosen to plan and plot have failed to take into account both the changed political situation in the US and the ongoing reassessment of its role in the region.

Additionally, no effort has been taken, we clearly see, to take into account that the revolution that so many love to watch in Syria would be far more successful against the Persian Gulf States or Saudi Arabia.

If there are unauthorized KC 135 aircraft within range for such a mission as outlined, satellite reconnaissance would require them to be “hidden in plain sight” on a base such as Diego Garcia.

Let us hope that if such an endeavor has been undertaken, the US military is able to take rapid and corrective measures to “mitigate” the threat to regional stability.