Home Veterans Why they call him ‘Agent’ Cameron 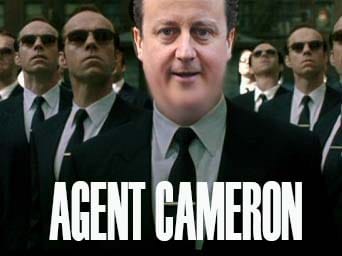 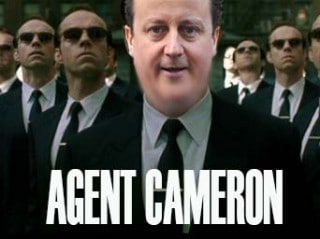 Britain’s prime minister David Cameron has again shown why he should stand down from British politics.

In a speech to Conservative Friends of Israel at a lunch the other day he said – and not for the first time – things that are deeply disturbing to people who expect him to put British interests first. He again compromised himself and this country with ridiculous pledges of support for a foreign military power whose behaviour is beyond the Pale and an affront to human decency. Here are some of his remarks…

“I am a passionate friend of Israel – and that’s the way it’s going to stay.”

In that case you shouldn’t be in British politics, Mr Cameron. You have fallen foul of the Seven Principle of Public Life, especially the principle of ‘Integrity’ which says quite simply: “Holders of public office should not place themselves under any financial or other obligation to outside individuals or organisations that might seek to influence them in the performance of their official duties.”

“We promised to stand up for Israel and in Government that’s exactly what we’ve done. We said it was ridiculous that Israeli officials felt unable to visit Britain because of the malicious and unfounded use of arrest warrants so we changed the law to end it.”

Unfounded? Tzipi Livni, for example, was responsible for launching the pre-meditated blitzkrieg four years ago which caused the deaths of 1,400 defenceless Gazans (including 320 children and 109 women), horribly maimed thousands more and caused immense devastation to essential infrastructure and services. She showed no remorse. Livni’s office issued a statement saying she was proud of Operation Cast Lead, and speaking later at a conference at Tel Aviv’s Institute for Security Studies, she said: “I would today take the same decisions.”

Even though Israel is in continual breach of EU-Israel Agreement rules and forcibly prevents its neighbours, the Palestinians, from doing business and trade with the outside world…

“To me it is clear what needs to happen… We need the Palestinians to understand there is only one path to statehood, and that is through negotiations with Israel. We made that clear with that UN vote a couple of weeks ago.”

Wrong. The correct path to statehood is through implementation of international law and UN resolutions and the approval of the international community. Only when the illegal occupation is ended and the right of self-determination is restored can meaningful talks begin.

“We said that Britain could not support a resolution that set back the prospects for peace and that did not commit the Palestinians to return to negotiations without preconditions. Well: they did not provide the assurances that we asked for. So… we did not vote for it.”

Pure blackmail. Bullying Palestinians into resuming failed and discredited talks to bargain with the thief for the return of their lands and property when it is still being stolen with impunity, is utterly immoral. There can be no peace under occupation. And nobody ‘negotiates’ with a gun to their head, nor should they be expected to.

“And I have made something else clear that needs to be made clear to the Palestinians. Britain will never tolerate the obscenity of a football tournament named after a suicide bomber who killed 20 Israelis in a restaurant. We will not tolerate incitement to terrorism.”

This is about Wafa Idris. It has become a favourite rant and Cameron was banging on about it a couple of months earlier at another top Jewish gathering. According to The Jerusalem Post (September 2011) a Fatah-affiliated youth centre in the Ama’ari refugee camp near Ramallah named a sports event after female suicide bomber Wafa Idris, a 28 year-old paramedic who had been shot several times by Israeli rubber bullets during her work for the Red Crescent. Relatives said she was angry at seeing children shot and killed by the IDF in Ramallah. Idris was the first Palestinian woman to carry out a suicide bombing. The Al-Aqsa Martyrs Brigade, a subsidiary of Abbas’s Fatah (who are Cameron’s friends in Occupied Palestine), claimed responsibility for the bomb attack although her family said she was not known to be an activist with any Palestinian militant group.

Cameron, before opening his mouth, might have asked what led her to do it. Wafa Idris was born in the Ama’ari refugee camp http://www.unrwa.org/etemplate.php?id=105 . Set up by the Red Cross in 1949 it provided tents to refugees from Jaffa, Ramla and Lydda, towns allocated for an Arab state in the UN Partition but subjected to a bloody programme of ethnic cleansing in 1948.

In Lydda the Israelis massacred 426 men, women, and children. 176 of them were slaughtered in the town’s main mosque. See http://www.palestineremembered.com/al-Ramla/al-Lydd/index.html for lurid details. Out of the 19,000 people who called Lydda home, only 1,052 were allowed to stay. The remainder were forced to walk into exile in the scalding July heat leaving a trail of bodies – men, women and children – along the way.

The slaughter in Lydda was led by a certain Moshe Dayan. The event was witnessed by two American newspapermen who reported that “practically everything in their way died. Riddled corpses lay by the roadside.” They saw “the corpses of Arab men, women and even children strewn about in the wake of the ruthlessly brilliant charge”. This appalling war crime didn’t prevent Dayan becoming a great hero in Israel, and later defence minister and foreign minister.

Today Tel Aviv University has a Moshe Dayan Centre named after the war criminal, but I haven’t heard Cameron complain about that. Likewise the Menachem Begin Centre in West Jerusalem is named after the terrorist leader responsible for the bomb attack in 1946 on the British mandate government based in the King David Hotel, killing 91. Has Agent Cameron anything to say about that?

Back to the Ama’ari refugee camp, now run by the UNRWA, where Wafa Idris was obliged to live in squalor as a result of Israel’s criminal land-grab and forcible eviction of her parents from Ramla. At Ama’ari 10,500 people are squeezed into less than 1 square kilometre in dreadful conditions.

However the camp’s football team has won the Palestine football championship several times and qualified to represent Palestine in regional and international competitions.

The Arab media were lavish in their praise for Idris, the “courageous Palestinian girl”, and as a result she became a heroic symbol of Palestinian womanhood in their struggle to throw off the occupation. If it’s OK for Israel to name major institutions after its famous terrorists what right has Cameron to get upset when a Palestinian football team similarly commemorates one of theirs?

“So, in Gaza too, Hamas need to know that they must renounce violence and they will not be allowed to dictate the way forward in the peace process.”

Does Cameron have the balls to tell Israel it too must renounce violence? Hamas, in case he has forgotten, is the legitimate democratic authority. He may not like it but he should respect it and work with them, like the good democratic he claims to be.

“Last month, when rockets rained down on Israel, we were unequivocal about the right of Israelis to live free from attack by terrorist groups on their border.”

When Gaza suffers air strikes on a daily basis, how unequivocal is Cameron about the right of Palestinians to live free from attack by the terrorist state occupying their lands?

“I’ve never had to run for cover as the air-raids sound overhead. I’ve never had to give gas masks to my children. I do understand that for the Israeli people, uncertainty isn’t such a great thing. It means instability. Anxiety. Fear.”

If he goes to Gaza he can experience fear and anxiety in abundance under Israeli air raids. I vividly remember as a kid being bombed by the Nazis every night in London – and not with garden-shed whizz-bangs. I remember German bombers flying at rooftop height down our street to avoid the anti-aircraft guns. At least they didn’t use white phosphorus like the Israelis.

Cameron’s hyper-partisan, head-over-heels friendship – no, obsession – with Israel is allowed to steer nearly every aspect of Britain’s foreign policy. What drives this? You need look no further than The Jewish Chronicle which in 2006 reported on the backers bankrolling David Cameron’s bid for power and provided a fascinating insight into how the pro-Israel lobby infiltrates government and destroys the principles of integrity and accountability so vital to public life. http://website.thejc.com/home.aspx?AId=46698&ATypeId=1&search=true2&srchstr=+%2B%22big+jewish+backers%2B%22&srchtxt=0&srchhead=1&srchauthor=0&srchsandp=0&scsrch=0 .

When Cameron became Conservative leader he proclaimed: “The belief I have in Israel is indestructible – and you need to know that if I become Prime Minister, Israel has a friend who will never turn his back on Israel.”

Agent Cameron is very careful not to let the words ‘justice’ and ‘law’ pass his lips in connection with Israel’s illegal occupation of the Holy Land. And he and his foreign secretary, Hague, will put on a wonderful show of hand-wringing, deploring and urging whenever Israel commits atrocities, but they never condemn the racist regime or use any obvious levers like suspension of trade or other sanctions.

On the contrary, they shamelessly find ways of rewarding the Israeli regime’s crimes against humanity, making us complicit with its racist ambitions.