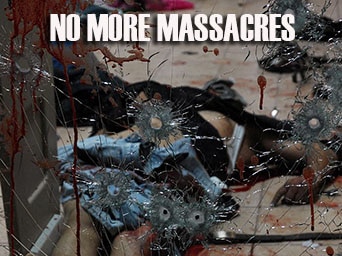 We are a nation that is not only starts wars around the world but which is at war with itself. That’s a generality. But add up the availability of 300 million firearms with the psychological impact of saturation violence filling the eyes and ears of our people from all forms of media and you have a lethal combination that predictably leads to massacres by unstable individuals. There aren’t enough medical professionals in America to identify and treat every disturbed person with a notion to wreak violence. We have to take away the means by which disturbed individuals kill; we need to outlaw handguns and assault weapons right off. We’ve also got to stop the wave of psychological impressions that are pouring in over the airwaves and from video games and TV commercials that suggest it is okay to commit violence, that it is all right for Marvel Comics heroes, for Batman and Captain America to take the law into their own hands and use violent means to bring the “bad guys” to justice. We could also remove from video game arcades the machine guns players use to mow down their enemies and to ban sale of violence-filled “games” that make random violence appear “normal” to our children. There is also the matter of those Pentagon recruitment videos that depict armed young men storming across a battlefield holding lethal weapons who are supported by tanks and fighter planes—-as these pictures glorify warfare. No law passed by Congress is going to work (and I support such legislation) without a basic change in our culture.

This is a change that needs to being with President Obama, who is consoling that relatives of the massacre victims while he is himself a culpable war criminal responsible for the illegal deaths of thousands of innocent victims in the Middle East, including children, by his military assaults and drone warfare—-drone warfare that the Bureau of Investigative Journalism in UK says has killed more than a hundred children. Why is the life of a child in Pakistan worth less than a child in Connecticut? Capital punishment, even with due process, is revolting but taking human lives without legal proceedings is madness.The use of drone planes in the Middle East is terrorizing populations, making parents reluctant to send their children to school or into the street to play—and President Obama bears direct responsibility for this. No, we need to put down our weapons everywhere, overseas in Pakistan and Yemen and Afghanistan and also in Chicago—-where more citizens are being murdered by gun violence annually than the U.S. is losing troops in Afghanistan. Yielding to public pressure, President Obama may propose “gun control” legislation. But let him begin in the Oval Office. Let him call back U.S. troops from around the world and close down those 1,000 foreign military bases. Let him slash the Pentagon’s budget and expand the Peace Corps budget.

The United States today is an insane asylum, and the President, tragically, is responsible for the deaths and wounds of those he sends needlessly and illegally into battle. And his past inaction on gun control makes him responsible in part for the slayings at home, just like former presidents and members of Congress who support him. We have slaughtered 160,000 of our own people by firearms since 2000 and we have killed several million abroad. I am deeply ashamed of my country, especially as we are capable of better things. After all, this is the nation that gave the world the Bill of Rights and the electric light, winged flight, the skyscraper, the motion picture, open heart surgery, great art, great literature, and much, much more. We need to make our culture glorify non-violence and diplomacy rather than aggression and war, and suit our foreign policy to that standard. Otherwise, we will continue to pay lip-service to the memory of Rev. Martin Luther King, whose call for non-violence the U.S. has never tested abroad, even though love is its animating power and must triumph in the end. The UN Charter says that wars begin in the minds of men. We need to pass laws, yes, but as well we must change the pictures we are putting into the minds of our people—or else.