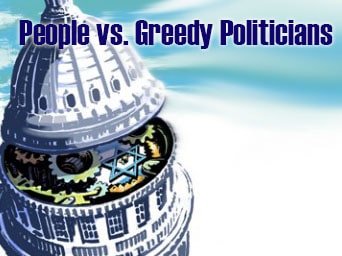 “A veteran is someone who, at one point in his or her life, wrote a blank check made payable to the United States of America for an amount of ‘up to and including their life‘!”

The above quote I found in the publication Veterans Post at the local VA hospital. It’s powerful. It makes you think. One of the things it makes you think about is how this altruistic idealism that is found in the majority of people who sign up is horrifically and criminally abused by the politicians.

Currently American troops are being misused and abused by US politicians of both parties for nothing other than the advancement of their political careers. They promote their political careers by making the most powerful foreign lobby in America, the Israel lobby, happy. And the best way to make the Israel lobby happy is to use American military people and American tax dollars to fight Israel’s enemies. This is what they did in the unnecessary war with Iraq and they’re getting ready to do it yet again in Iran. (In spite of the fact that many readers of this site don’t believe 9/11 was an attack by al Qaeda, if the US had followed the advice of the Deist George Washington who told us not to favor one nation over another, we would probably not be involved in a war in Afghanistan since Osama bin Laden wrote in his open letter to Americans a key reason for the 9/11 attacks was America’s blind support for Israel which results in the killings of countless Muslims.)

Currently the Israel lobby is swinging into action against the possibility that Obama may nominate the Vietnam combat vet/grunt Chuck Hagel to be the new Secretary of Defense. In one case of opposition to Hagel, Bret Stephens, the Jewish deputy editorial page editor of the Wall Street Journal and former editor-in-chief of the Jerusalem Post, was so frazzled by the possibility of Hagel’s appointment he quoted the authors of the powerful book which Zionist hate The Israel Lobby, Walt and Mearsheimer! (Just because Hagel is a Vietnam combat vet doesn’t mean he will do what’s right by standing up to Israel and its lobby in a meaningful way. Just look at John Kerry who is also a Vietnam combat vet. He could have taken the moral high ground when the Democrats and Republicans frantically attacked Howard Dean for saying the US should have a balanced Middle East foreign policy during the 2000 campaign but instead he joined in the attack.)

In order to protect the altruism of young Americans who decide to join the military we must work hard and take action. We need to expose the politicians who betray our military people and their ideals for the benefit of their meaningless political careers. This is much more difficult than it sounds. It takes a lot of concerted and persistent action by those who care enough to act. We need to realize the truth to this statement by the Deist Leonardo di Vinci: “Thou, O God, dost sell unto us all good things at the price of labor.” Let’s get to laboring!