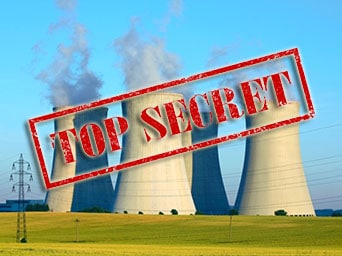 U.S. corporations that reap billions from making nuclear weapons have “a direct voice” as to “their use and deployment,” a distinguished political scientist warns.

On August 6, 2003, a secret meeting was held at U.S. Strategic Command headquarters at Offutt Air Force Base, Omaha, Neb., that brought together more than 150 “senior executives from the nuclear industry and military-industrial complex,” writes Michel Chossudovsky, Professor Emeritus at the University of Ottawa and Founder of the Centre for Research on Globalization, of Montreal.

According to a leaked draft of the agenda, the secret session included discussions on “mini-nukes” and “bunker-buster” bombs with nuclear warheads “for possible use against rogue states,” Chossudovsky writes in his new E-book, “Towards a World War III Scenario,”(Global Research.)

The meeting was intended to set the stage for creation of a new generation of “smaller,” “safer,” and “more usable” nukes for use in “in-theater nuclear wars” of the 21st Century, Chossudovsky writes. No members of Congress representing the public were in attendance.

Barely a week prior to this meeting, the National Nuclear Security Administration(NNSA) disbanded the advisory committee that had “independent oversight” over the U.S. nuclear arsenal, including the testing and/or use of new nuclear devices.

The nuclear industry—which makes both nuclear devices and their missile delivery systems—Chossudovsky writes, is controlled by a handful of defense contractors, led by Lockheed Martin, General Dynamics, Northrop Grumman, Raytheon, and Boeing.

Meanwhile, “the Pentagon has unleashed a major propaganda and public relations campaign with a view to upholding the use of nuclear weapons for the ‘defense of the American homeland,” Chossudovsky writes. He points out:

“In an utterly twisted logic, nuclear weapons were presented as a means to building peace and preventing ‘collateral damage.’ The Pentagon had intimated..that the ‘mini-nukes’ with a yield of less than 5,000 tons are harmless to civilians because the explosions ‘take place under ground.’ Each of these ‘mini-nukes,’ nonetheless, constitutes—in terms of explosion and potential radioactive fallout—between one-third and six times the atom bomb dropped on Hiroshima in 1945.”

Based on the twisted notion that the “mini-nukes” are “not dangerous for civilians,” the U.S. Congress in 2003 gave the Pentagon and MIC the “green light” to use tactical nuclear weapons in “conventional war theaters” (such as the Middle East and Central Asia) alongside conventional weapons, Chossudovsky writes.

This new nuclear doctrine, he goes on to say, turns reality upside down not only by denying the horrific impact of nuclear weapons but by asserting “in no uncertain terms that nuclear weapons are ‘safe’ and their use in the battlefield will ensure ‘minimal collateral damage and reduce the probability of escalation.” Chossudovsky notes, “The issue of radioactive fallout is not even acknowledged with regard to tactical nuclear weapons; neither is the issue of ‘Nuclear Winter.’”

To justify pre-emptive military actions, U.S. National Security Doctrine(NSD) requires the fabrication of a terrorist, or “outside enemy,” threat, the author writes. As well, the doctrine needs to tie said terrorist threats to “state sponsorship” by so-called rogue states. Here, the Global War on Terror(GWOT) directed against Al Qaeda fits right in as essential building blocks in the Pentagon’s GWOT campaign.

Under the latest nuclear doctrine, the Pentagon discards the policy of fighting in “self-defense” in favor of “anticipatory action.” This war would allow the use of nuclear weapons against a “rogue enemy” who is alleged to plan to develop WMD at some undefined future date, Chossudovsky writes.

“Nukes would serve to prevent a non-existent WMD program (e.g Iran) prior to its development,” the author explains. “This twisted formulation goes far beyond the premises of the 2001 Nuclear Posture Review and NPSD 17, which state that the U.S. can retaliate with nuclear weapons if attacked with WMD.”

And by integrating nuclear with conventional armaments on the battlefield, “there is the risk that tactical nuclear weapons could be used without requesting…presidential approval,” Chossudovsky writes. He asserts, “combat commanders would be in charge of Theater Nuclear Operations(TNO), with a mandate not only to implement but also to formulate command decisions pertaining to nuclear weapons.”

Moreover, because these “smaller” tactical nuclear weapons have been reclassified by the Pentagon as “safe for the surrounding civilian population,” thereby allegedly “minimizing the risk of collateral damage,” there are no overriding, built-in restrictions to prevent their use, Chossudovsky writes. Stockpiled tactical nuclear weapons, he concludes, are now considered to be an integral part of the battlefield arsenal, “part of the tool box,” so to speak, used in conventional war theaters.

Sherwood Ross formerly worked as a columnist for wire services and as a reporter for major dailies. He currently operates a public relations firm “for good causes.” One of them is the book, “Towards A World War III Scenario.” Reach Ross at [email protected].

To order the book: Towards a World War III Scenario: The Dangers of Nuclear War