The “Holocaust Bomb,” a Re-Revisionist Myth 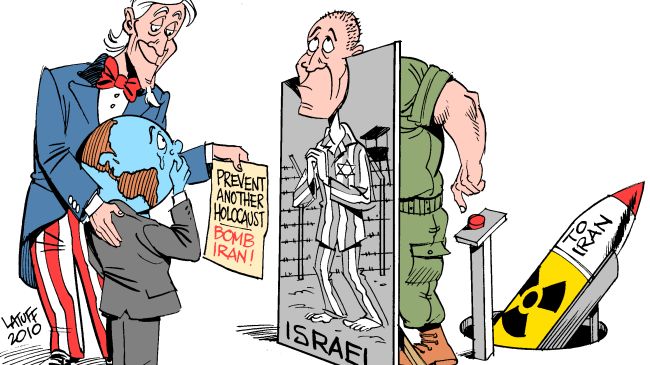 “We had discussed Israel’s failures and the desperation that would lead to the creation of a new “re-revisionist holocaust” of proportions beyond any possible reason or rationale.”

Two new studies, both out of Israel, have the world spinning. One, released by the Holocaust Memorial Museum, places Europe’s Jewish population in 1939 at between 40 and 50 million, with up to 20 million holocaust dead.The other, released by Johns Hopkins, finds the following, as reported by Israel’s Haaretz:

“The various groups of Jews in the world today do not share a common genetic origin. We are talking here about groups that are very heterogeneous and which are connected solely by religion…[the] genome of European Jews is a mosaic of ancient peoples and its origin is largely Khazar.”

(Dr. EranElhaik, The Missing Link of Jewish European Ancestry: Contrasting the Rhineland and the Khazarian Hypotheses; Department of Mental Health, Johns Hopkins University Bloomberg School of Public Health, McKusick-Nathans Institute of Genetic Medicine, Johns Hopkins University School of Medicine)
One study lists up to 14 million new Jewish holocaust deaths while the other, published by one of the most prestigious institutions in the world, seemingly debunks the presence of any ethnic “Jewish” population in Europe whatsoever.

Changing facts to make them “fit”….again

Thus, a world obsessed with “the holocaust” is faced with a conundrum: 6 million, 20 million or, if Johns Hopkins is correct, no members of a “Jewish race” perished whatsoever.
A seemingly endless series of political and public relations blunders by Israel has left them vulnerable to public scrutiny, even in the United States, where it had been believed that the flood of propaganda would work forever.

Israel has decided to risk all, flooding the media with an entirely new and totally undocumented version of the holocaust, one intended to debunk even their own previous version and to create a new “revisionist holocaust” of massive proportions.
Today, the New York Times, with NBC News, reported by Eric Lichtblau (light blue in German), announced the “discovery” of, not only tens of thousands of new concentration camps across Europe but added tens of millions of new victims to the previous legally mandated tally of only 6 million.
The finding coincides with the upcoming AIPAC convention in Washington and is hoped to spark renewed outrage at nations that refuse to approve of Israel’s ethnic cleansing and apartheid policies. From the New York Times:

“The researchers have cataloged some 42,500 Nazi ghettos and camps throughout Europe, spanning German-controlled areas from France to Russia and Germany itself, during Hitler’s reign of brutality from 1933 to 1945. The lead editors on the project, Geoffrey Megargee and Martin Dean, estimate that 15 million to 20 million people died… The existence of many individual camps and ghettos was previously known only on a fragmented, region-by-region basis. But the researchers, using data from some 400 contributors, have been documenting the entire scale for the first time, studying where they were located, how they were run, and what their purpose was.”

The new total, up to 42,000 “death camps” with “gassing” totals now approaching 20 million Jews, over 400% of the estimated total living in Europe at the time, has flabbergasted historians.

“We didn’t know, how could we?

These “findings,” a total rewrite of history, a new version far beyond the wildest dreams (nightmares) of “revisionist historians,” will require the rewriting of laws across the world, the re-education of hundreds of highly subsidized “holocaust professors” and the total retooling of literally hundreds of holocaust memorials.

Every textbook in the world will have to be burned.

Moreover, in addition to the hundreds of scholars and activists imprisoned around the world for “holocaust denial,” the crime of disputing the officially sanctioned “6 million dead” figure, a criminal act in dozens of nations, now those who continue to either use the old “6 million” figure or refuse to destroy materials or censor films making reference, also face prosecution and up to 10 years incarceration.
Building new memorials, creating new plaques, destroying old ones, will have to begin on a scale that may well begin a rebuilding of Europe’s ravaged economies.
Scientists around Europe, mathematicians, physicists, statisticians, working with artists, memorial designers and architects, are soon to be tasked with attributing the 42,000 new “death camps” with needed totals.
This will be particularly difficult as previous “death camps,” such as Dachau and Auschwitz had either been reclassified as actual prisons or had their numbers of deaths reduced by up to 80%.
In some facilities, deaths previously attributed to Jews are now listed as largely Russian prisoners of war, Gypsies, or political prisoners. Thus, not only will the attribution of up to 20 million Jewish deaths be a challenge but an academic conclave on holocaust statistics, expected to take years, is likely to be required to make new “facts” fit the testimony of unattributed informants.
A review of current findings combined with an analysis of post-war population figures now shows Europe’s Jewish minority to actually have been quite something else. In fact, there may well have been, as we are now seeing, more Jews in Europe than Germans or French.

The Johns Hopkins study by Dr. Elhaik presents a “two edged sword” of challenges. In totally debunking the mythology of the “Jewish Genome,” the claimed “legal basis” for citing biblical rationale for the seizure of land in Palestine, Elhaik also assails even the use of “anti-Semitism,” a term used to attack those who oppose Israeli policy.
As studies show, as few as 2% of Jews in Palestine have any Semitic blood, the term “anti-Semite” can only be applied toward those who align themselves against the Palestinian people.
This makes most Jews in Israel “anti-Semites.”

In all fairness, criticizing bizarre new “wingnut conspiracies” meant to reinvigorate what Professor Normal Finkelstein called the “holocaust industry,” without using a “broader brush” is disingenuous.
For every war criminal and “huckster” profiteering on victimization mythology, there are now and have been for centuries, those who have profited on demonizing a “Jewish race” that they themselves have always been an equal part of.
When comparing studies of the origins of, not just Slavic but Nordic peoples as well, the racial origins directly parallel those found on the Johns Hopkin’s study.
A study of the human genome has shown there to be little difference between the “Jewish blood” of a Venetian “money changer” and a Viking prince. Thus, centuries of persecution, either based on attacking Jews as “Christ killers” or for imagined racial characteristics are known now to have always been baseless.
As shown, only a minute number of European Jews show any Middle Eastern origin whatsoever, much less any direct tie to the persecution and murder of a first century religious figure.

We had discussed Israel’s failures and the desperation that would lead to the creation of a new “re-revisionist holocaust” of proportions beyond any possible reason or rationale.
A week ago, Saudi Arabia and the UAE announced they were buying billions in German weapons in order to defend Israel from Iran. There have long been stories about Israel being America’s “best friend” in the Middle East. Now we find that Israel is also Saudi Arabia’s best friend too? Along with the UAE, do we add Turkey, Bahrain, Qatar and how many other countries? How long has this been going on?
Yes, how long have so many been lying about so much?
The United Nations vote confirming Palestinian sovereignty removed any legal basis for Israeli occupation and settlement. The Johns Hopkin’s study obliterated any biblical claim as well. Virtually none of the Jews who settled in “Israel” possesses an iota of Semitic blood.
Even minor public relations disasters like the recent “Purim” celebration where Jewish children celebrated the 9/11 terrorist attacks as Israeli victories, are exploding the mythology of who the real terrorists are and have always been.
From a Press TV article by Dr. Kevin Barrett:

“For more than eleven years, Israel has been wildly celebrating the success of its 9/11 operation against the United States of America. The latest example: Israeli children recently dressed up as the burning Twin Towers, complete with impaled exploding airplanes, to celebrate the bizarre Jewish holiday known as Purim.”

This disaster follows two more, Israel’s failure to block the re-election of President Obama and Israel’s failure to derail the appointment of Chuck Hagel as Secretary of Defense.
Recognized “enemies of Israel” now control two of the three top American offices, leaving only John Kerry, Secretary of State, as an Israeli surrogate.
Moreover, recent talks between Iran and the “5 plus 1” powers has brought about an agreement to begin rolling back sanctions and to recognize, at least partially, the peaceful aspect of Iran’s nuclear energy program.
This may well signal, not just a disaster for Israel but an end to the usefulness of so many machinations, interference in Syria, controlling Turkey’s Erdogan as a “hand puppet” and orchestrating terror attacks in Iraq.
Maybe a new, even more inflated holocaust, this time with 100 million dead, can “dazzle” the world.
GD/HMV