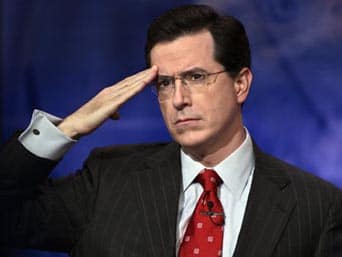 Truthiness describes a condition where “facts matter not at all,” where “perception is everything.” 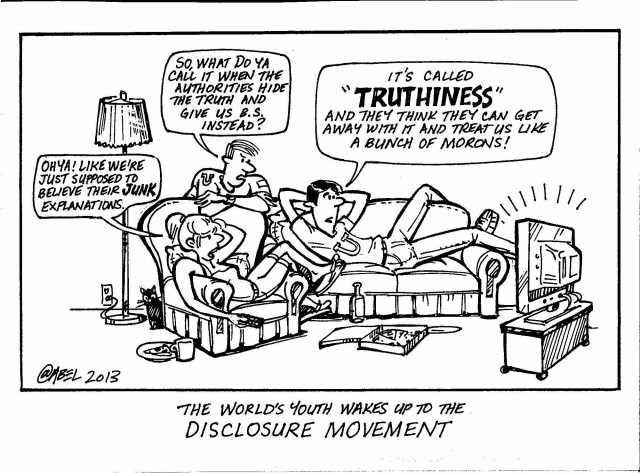 The Rapid Rise of the Disclosure Movement is Making the Content of Mainstream Media Look More and More Ridiculous: Truthiness in the News is Wearing Thin. As John Lennon Once Implored: All We Want is Some Truth. Just Give Us Some Truth.

Abel has some fun in this original cartoon playing on the word “truthiness,” a very useful term in this era when pseudo-reality and actual reality are so jumbled.

The presentation of fictional mythology as if it was “the truth” has become especially endemic in this era when media echo chambers put out barrages of disinformation to justify the  fraudulent Global War on Terror.

The replacement of truth with “truthiness” takes place in the factories of advertising and other mass communications where popular imagination is manufactured on an industrial scale. The same process is also taking place in the post-modernist branches of the academy.

The term, “truthiness,”was coined by Stephen Colbert in October of 2005 as the core idea in a segment on the pilot show of Comedy Central’s The Colbert Report. Colbert explains “truthiness” as the identification of truth through intuition rather than evidence. Truthiness describes a condition where “facts matter not at all,” where “perception is everything.”

The term “truthiness” was seized upon by many guardians of the English language, including Merriam-Webster’s Dictionary, the American Dialect Society, the BBC and the New York Times as an all-star word, as an important addition to the lexicon of contemporary civilization.

The word has taken off during an era when the national security state regularly injects lies and deceptions into popular discourse to cover over its many critical secrets.

Our systems of education and popular media thereby become cultural assembly lines of pseudo-truth to cover over the real truth which is often classified by our governors as being too strategically important to become the currency of everyday life for average citizens.

The pervasiveness of truthiness at the highest levels of governance in the corporatist state sets patterns that are replicated, extended and intensified throughout society.

Colbert’s conception of “truthiness” reflects trends in the academy where preoccupations with relativism favor analytical approaches that integrate multiple perspectives. When everything is seen to be a function of varying perspectives, no perspective is considered more true or less true than any other.

Everything is relative. Nothing is fixed and permanent and absolutely true. Facts are subordinated to opinion. The landscape of popular consciousness becomes fertile ground for sowing the seeds of deception. 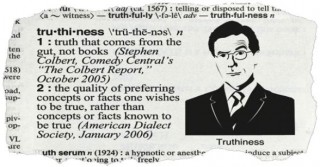 Part of the CIA’s function during the Cold War was to fund and promote post-modern art, but especially those branches of cultural production such as Abstract Expressionism whose purpose was to draw public tastes as far away as possible from realism.

The downgrading of the truth for truthiness became especially prominent in some facets of the academy, but especially the humanities and social sciences.

For those schooled in the post-modern heritages of, for instance, French philosophers Francoise Lyotard, Jacques Derrida, and Michel Foucault, the established truths of former times have been reassigned the role of illusory ploys exploited for the maintenance of oppressive relationships of of power.

Indeed, for many post-modernists the quest for some sort of absolute standard of truth has been made to seem passé and banal.

The bankers, militarists, and corporatists in charge of the national security state are thus able to exploit truthiness as promoted in both popular culture and high academic culture.

As truthiness creates the culture for the proliferation of junk science, the most aggressive spinmasters on the planet attempt to contain for themselves the instruments of genuine science for their own oppressive purposes.

The growing strength of the disclosure movement is countering the exclusionary and monopolistic propensities of the criminal cabals operating behind the veils of so-called national security.

The resulting clash of cultures between the forces of exclusionary elitism and inclusive truth-telling make control of the instruments of schooling increasingly crucial. Will truth or truthiness prevail in our schools and in our agencies of public education?