Home Life Will US military be “al-Qaeda’s air force” in Syria on September 11th? 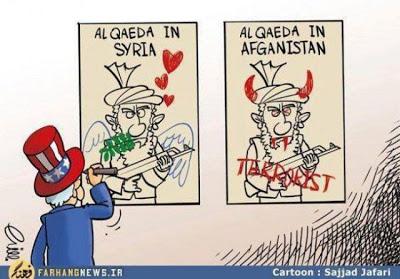 One of America’s most respected political leaders, former congressman and presidential candidate Dennis Kucinich, says the US is about to become “al-Qaeda’s air force.”

Kucinich points out that the US-supported rebels fighting the Syrian government are led by al-Qaeda. Even the New York Times has admitted that the leading anti-Assad group is an al-Qaeda affiliate called the al-Nusra front: “In Syria’s largest city, Aleppo, rebels aligned with Al Qaeda control the power plant, run the bakeries and head a court that applies Islamic law.”

So if the US intervenes against Assad, it will be supporting al-Qaeda.

And it gets worse.

By postponing his attack on Syria, US President Obama has set the stage for one of history’s supreme ironies: On September 11th, the US military could become “al-Qaeda’s air force.”

A congressional vote authorizing a US attack on Syria could come on Monday or Tuesday, September 9th or 10th. This could set the stage for a US bombing campaign designed to help al-Qaeda take control of Syria. And that bombing campaign could be launched on September 11th.

Would the American war party really have the chutzpah to choose September 11th as the date to launch its pro-al-Qaeda bombing campaign?

The neocon warmongers may be running out of money, but they suffer from no shortage of chutzpah. Turning the US Air Force into al-Qaeda’s Air Force on September 11th cannot be ruled out.

Why do some US policy-makers want to help al-Qaeda take over Syria?

Third, they want to destabilize Syria and ensure that there is no competent Syrian government capable of administering and defending Syrian territory. That would allow US-occupied Qatar to put a gas pipeline through Syria to Turkey, and help Rupert Murdoch and Lord Rothschild’s company Genie Energy drill for oil in Syria’s Israeli-occupied Golan Heights.

Fourth, the Israelis – who largely control US Mideast policy – want Syria broken up into three weak mini-states. Israeli Minister of Military Affairs Moshe Yaalon explained the desired outcome: “’We could see the implosion of Syria with the Alawites controlling the western part – the coastal region and a corridor to Damascus – and the Kurds and Sunnis controlling the east and north.”

Sixth, an al-Qaeda victory in Syria would put al-Qaeda back on the map as a supposed threat to the West, and re-energize the flagging “war on terror.”

And seventh, a newly-energized al-Qaeda could continue to be a covert ally of the West in its terrorist attacks on Russia, Iran, Iraq, and other nations that refuse to do the West’s bidding.

The truth is that al-Qaeda has always been the West’s ally, not its enemy. The plan to unleash al-Qaeda was drafted at the Jerusalem Conference on International Terrorism (JCIT) in 1979. Bernard Lewis, a British-Zionist Middle East expert, is al-Qaeda’s intellectual godfather.

“Turkish daily Zaman revealed that (al-Qaeda leader Laui) Sakra, like many of the alleged 9/11 hijackers, did not act in accordance with basic Islamic edicts. When Turkish Security Directorate officials told him that ‘he might perform his religious practices to have a better dialogue… and to gain his confidence,’ Sakra responded: ‘I do not pray. I also drink alcohol.’

“Zaman reported incredulously the most surprising elements of Sakra’s candid revelations during his four-day interrogation at Istanbul Anti-Terror Department Headquarters: ‘…al-Qaeda may not be, strictly speaking, an organization, but an element of an intelligence agency operation.’ As a result of Sakra’s statements: ‘Turkish intelligence specialists agree that there is no such organization as al-Qaeda. Rather, al-Qaeda is the name of a secret service operation. The concept ‘fighting terror’ is the background of the ‘low-intensity-warfare’ conducted in the mono-polar world order. The subject of this strategy of tension is named as ‘al-Qaeda.’ ”   (From 9/11 and American Empire v.2)

Sakra, one of al-Qaeda’s top five kingpins, turned out to be on the CIA payroll. Like Osama Bin Laden, code-named “Tim Osman,” and al-Qaeda’s main operational terror organizer, Ali Mohamed, Laui Sakra was a Western intelligence asset whose job was to manufacture phony “Islamic terrorism” in service to Western and Zionist geo-strategic goals.

On September 11th, 2001, rogue US military commanders flew remote-controlled planes into their targets; the Pentagon was bombed; and the World Trade Center was demolished with explosives. The operation was conducted under the cover of what historian Webster Tarpley calls “the 46 Drills, War Games, and Operations” that made 9/11 happen.

So if the US Air Force becomes al-Qaeda’s Air Force on September 11th, it won’t be the first time.