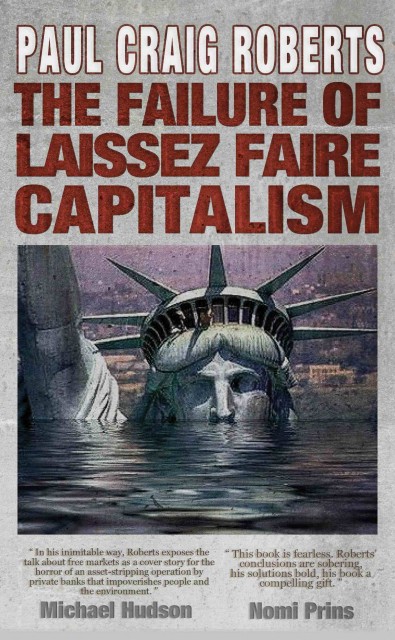 Dr. Paul Craig Roberts is unquestionably one of the world’s leading political economists. His many awards include induction into the French Legion of Honor for his historic contributions to economics.

Dr. Roberts is still widely viewed as an apostle of free markets. He is perhaps best known as the Reagan Administration Assistant Secretary of the Treasury who ushered in supply-side economics and helped downsize government. When such a towering figure of free-market thinking says that laissez-faire capitalism has failed, it signals a seismic shift in his own thinking, or in history’s trajectory. Or maybe both.

Paul Craig Roberts says it’s the world, not himself, that has changed. He argues that the shift to supply side thinking – and subsequent slashing of tax rates and freeing up of markets – was a good idea at the time: the late 1970s. The big problem of the 1970s, Roberts says, was “as a result of inflation pushing up nominal incomes and saddling taxpayers with higher tax rates.” In those circumstances, cutting taxes to free up money for the markets reversed the vicious circle of higher taxes – less investment – a smaller pie – even higher taxes that was then ravaging Western economies.

This guy is obviously not a socialist. So when he says that free market approaches have failed, and it’s time for governments to jump back into economies in a big way, he must have some compelling reasons.

Those reasons should not be mysterious to anyone who has witnessed the implosion of the American economy during the past two decades. Roberts’ key points include:

*Markets are not self-regulating – they can only function if a referee ensures fair play, which is why deregulation has ushered in an era of pervasive looting and criminality.

*By deeming the biggest private financial institutions “too big to fail,” the market’s punishment for bad decisions is removed, encouraging limitless irresponsible and criminal behavior by the biggest players in the no-longer-free market.

*The destruction of labor unions has removed the power balance between labor and capital necessary to a viable free market.

*Jobs offshoring, which “has destroyed the productivity advantage of first world labor,” hollows out the real economy and cuts the connection between markets and human welfare.

Roberts argues that Americans have been socially, educationally, politically, and economically dispossessed by the new robber barons. Orwellian legislation including the NDAA with its indefinite detention provision, he says, has repealed the Bill of Rights and led to “the degeneration of American democracy into a police state.” (Elsewhere Roberts has noted the role of the 9/11 inside job in the destruction of American democracy.)

The annihilation of political freedom has accompanied the economic assault on the middle class. Roberts marshals a range of statistics showing that “the wipeout (of the manufacturing workforce) has been across the board.” Worse, “the knowledge jobs are being outsourced even faster than the manufacturing jobs…employment in First World jobs in the US has collapsed…America has become a ‘superpower’ with a Third World work force in lowly paid domestic service.”

Obviously such “superpower” status cannot long endure. In a recent interview on my radio show, Dr. Roberts suggested that the fall of 2013 would be viewed by future historians as the moment when America’s reign as world’s hegemon ended. Roberts cited the USA’s failure in Syria, its government shutdown crisis, and newly assertive statements and moves by Chinese leaders as evidence that a seismic shift in great power relations has occurred. The days of the US dollar as chief global reserve currency – which allows the US to print money that is not backed by actual goods and services, and force other nations to accept it – appear to be numbered.

But it isn’t just the decline and fall of a hollowed-out US empire that concerns Roberts. An even bigger problem, he says, is the exhaustion of global resources that once seemed limitless. Resource depletion necessitates a shift from an “empty world” to a “full world” economic model, he says. In economic terms: “Even if countries are able to produce empty-world economic growth, economists cannot tell if the value of the increase in GDP is greater than its cost, because the cost of nature’s capital is not included in the computation.” Roberts cites Herman Daly, who says elites “have figured out how to keep the benefits for themselves, while ‘sharing’ the costs with the poor, the future, and other species.”

In championing a “full world” economic model that privileges a sustainable steady-state over endless, dubious growth – and human welfare for the many over profits for elites – Roberts has come full circle from his role as the growth-oriented free-market champion of the Reagan years. Let’s hope the world listens, and heeds his advice even more than it did the last time around. If we survive for another generation, the Legion of Honor may have to give Dr. Roberts another medal for making an even more important contribution to political economics – and the trajectory of history.