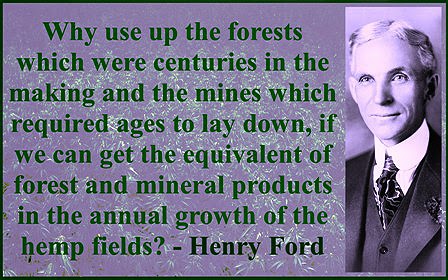 Where the people lead, the leaders will follow – Ghandi

Nothing exemplifies Ghandi’s vision more stunningly than the citizens movement to legalize marijuana and industrial hemp. At the time former Congressman Ron Paul introduced his 2011 Industrial Hemp Farming Act Bill, five states (North Dakota, Hawaii, Kentucky, Maine, Oregon, California, Montana, West Virginia and Vermont) had enacted laws authorizing industrial hemp cultivation. Without Obama’s support, the bill died in committee. Fast forward to November 2012, when Colorado voters passed Amendment 64 to legalize hemp cultivation.Last week the Denver Post reported on the Colorado farmer who made history by harvesting the first commercial hemp crop in the US in 56 years.
Growing industrial hemp is still illegal under the 1970 federal Controlled Substances Act. The law makes no sense whatsoever – scientifically, environmentally, or economically. First the hemp plant contains no psychoactive substances. Although genetically related to marijuana, hemp contains only trace amounts of THC, the compound that gets weed users high. Secondly hemp-based paper, textiles, rope, construction materials and even plastics are the tried and true low tech alternative to modern synthetics based on fossil fuels. Thirdly the US is the world’s largest importer of hemp (from Canada and China), for use in construction, clothing, paper, rope, pressed oil, and cooking.

Given Obama’s response back in August to the 34 states that have decriminalized marijuana use, he’s not expected to go after Colorado hemp farmers. On August 29, 2013, the president notified 94 US attorneys that states with recreational and medical marijuana (and hemp) laws can now let people use it, grow it under license, and purchase it from retail facilities — so long as possession by minors is prohibited and it doesn’t end up on federal property or in the hands of gangs and criminal enterprises.

New Zealand’s Hemp Renaissance
In New Zealand, hemp cultivation has been legal, under license, since 2006. We have two hemp farms here in Taranaki. I presently serve as secretary of the Douglas farm, run by John Earney, owner of Avonstour Rare Breeds organic farm (shown below speaking to Prince Charles – an organic enthusiast – during his recent visit to New Zealand).

It’s the goal of New Plymouth businessman Greg Flavall to create the word’s first hemp industrial village here in Taranaki. It would center around a $500,000 hemp processing facility that would use a decorticator and process hemp from all over New Zealand. Flavell envisions hemp as a major export industry to meet growing world demand. Once the long fibers are extracted, the rest of the plant can be used for pressed oil, flour, animal bedding, garden mulch, paper making, and food. 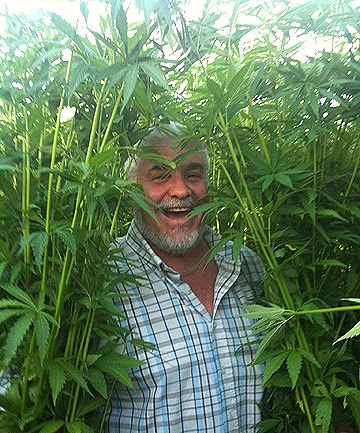 Flavall, co-founder of Hemp Technologies, is a builder specialized in constructing homes made of hempcrete – a hemp-lime compound that is a carbon-neutral thermal insulator, as well as being non-toxic, waterproof, fireproof and insect and mold resistant.

Hemp’s 12,000 Year History
Hemp, first used in 10,000 BC Taiwan, is one of the most versatile plants known to man. Hemp fiber is used in the production of paper, textiles, rope, sails, clothing, plastics, insulation, dry wall, fiber board, and other construction materials; while hempseed oil is used as a lubricant and base for paints and varnishes, as well as in cooking and beauty products. Hemp is also carbon neutral. Hemp-based paper, textiles, rope, construction materials, and even plastics are the tried and true low tech alternative to modern synthetics based on fossil fuels.
At the time of the industrial revolution, most textiles, clothing, canvas (the Dutch word for cannabis), rope, and paper were made from hemp. It was only with the industrial revolution and the proliferation of machinery run on cheap fossil fuels that more sophisticated alternatives, such as cotton, wood-based paper, and eventually petroleum-based plastics became cheaper alternatives. Before the cotton gin was invented in the 1820s, 80% of the world’s textiles, fabrics, and clothing were made of hemp. By 1883, hemp was still the primary source of 75% of the world’s paper. Up until 1937, when the US government passed a crippling hemp tax, most bank notes and archival papers were made of hemp (owing to its greater durability) and most paints and varnishes were made from hempseed oil.
Hemp has always been such a vital community resource that a long series of laws, dating back to Henry VIII (1535) required farmers to grow hemp or be fined. In 1619 Jamestown Virginia enacted a law requiring residents to plant hemp. Massachusetts and Connecticut passed similar laws in 1631 and 1632. Betsy Ross’s flag was made of hemp. The Declaration and Independence and Emancipation Proclamation are printed on it.
Henry Ford Grew Hemp
Hemp first began losing ground in 1850 to cheaper substitutes made of cotton, jute, sisal, and petroleum. Prior to the 1920s, hemp had to be processed by hand, involving huge labor costs incompatible with mass commercial production. Henry Ford, one of the first modern conservationists, remained a strong hemp advocate and had his own hemp plantation on his estate in Dearborn Michigan. After George W Schlicten automated hemp processing in 1917 with a new machine called the hemp decorticator, Ford set up the first biomass fuel production plant in Iron Mountain, Michigan. Ford ran the first Model T on corn-based ethanol (alcohol), but was quick to recognize hemp as a cheaper and more efficient fuel source. His engineers in Iron Mountain developed processes to extract ethanol from hemp, as well as charcoal and other industrial chemicals, including tar, ethyl acetate and creosote.
The Corporate Conspiracy to End Hemp Cultivation
All this was happening at the precise moment that the munitions company DuPont was patenting synthetic fibers (nylon, rayon, Dacron, etc) and plastics derived from petroleum. Schlicten’s hemp decoricator and automated hemp processing, posed a major threat to DuPont’s ability to market their new synthetic fibers. DuPont also had a commercial interest in promoting wood-based paper production (they held the patent on the sulfates and sulfites used to produce paper pulp and gasoline). As well as the patent on tetraethyl lead, which allowed gasoline to burn more smoothly in the engine Ford intended to run on ethanol.
The main co-conspirators in the plot to kill hemp included DuPont, William Randolph Hearst (who owned a logging company and paper manufacturing plant in addition to his American newspaper empire), and Andrew Mellon, president of Mellon Bank and DuPont’s major financier. In 1930, Mellon, as US Secretary of the Treasury, created the Federal Bureau of Narcotics and appointed his nephew Henry Anslinger to run it. Between 1935 and 1937, Anslinger and a handful of DuPont’s congressional cronies secretly wrote a bill to tax hemp production. Meanwhile Anslinger and Hearst orchestrated a massive media campaign demonizing a dangerous new drug called marihuana that supposedly turned Mexicans and black jazz musicians into crazed killers. Congress was deliberately tricked into believing marihuana was a totally new drug. The Marihuana Tax Act of 1937 was rushed through on a Friday afternoon before lawmakers had a chance to read it. Only a handful realized marihuana was the same as hemp, which was still viewed as an essential crop and vital to the paint and varnish industry.
Overseas Bans on Hemp Cultivation
Strongly influenced by DuPont, Mellon, and Hearst, in 1925 the League of Nations passed the Geneva International Convention on Narcotics Control. The British passed a law outlawing marijuana and hemp cultivation the same year. New Zealand banned it in 1927 under the Dangerous Drugs Act.
Flavell, a dual citizen,  operates an American subsidiary of Hemp Technologies (http://www.hemp-technologies.com/) out of North Carolina. They build permitted hemp homes across the US, as well as holding workshops on the technical processes involved.
Originally published at The Fifth Estate