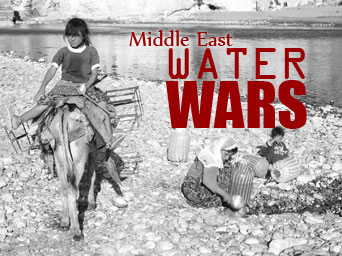 Water is life, so they say, but rivalry over supplies can lead to bitter conflicts. You can see here that, since the mid-20th century, the planet’s seen nearly 180 conflicts connected to water resources. These include both small and large-scale clashes – a lot of them in the Middle East and Africa. So, it might surprise you to hear that it’s water – rather than oil – that could be what’s fought over in the coming years in the region.

In the disputed lands occupied by Israel, they are absolutely dependent on the water coming from Syrian lands and so they continue to shove to see who controls the water when, in reality, it’s everyone’s water. Yet, small minds and thinking get in the way of understanding how it all works. Well Here, check out RTs Paula Slier reporting from Israel and Golan Heights and see what she says

Okay, now that you have a clearer understanding of the water wars in the Middle East, by its very nature, it makes the case for a Middle East Union for all citizens in the Middle East so that resources can go to where they are needed and not horded by the peoples who carry the biggest guns.

It’s time to recognize that the earths resources are public domain, are for all us and NOT just some of us thus rendering the 20th century’s idea of nationalism wanting; inefficient and ineffective placing brother versus brother for the right to survive…we can do so much better.

For expanding information and ideas, check out MiddleEastUnionCongress.org