Home World Ariel Sharon: An Inspiration for Millions Around the World 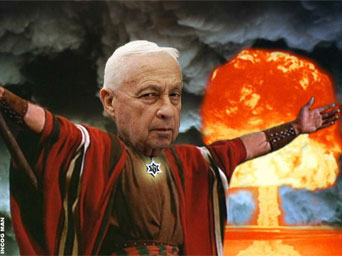 Back in September 1982, I was just beginning my sophomore year in college roaming the anti-septic streets in Orange County California in what is now known as the “OC”. Minding my own business like 99% of new college kids, I went to class, hit the commons, socialized, and went to parties. It was a great time to be a young college student. Then, whilst in my cousins garage hanging out we heard the news about Sabra and Shatila.

In those days, all we had was the local USA TV channels ABC, NBC, and CBS but we watched intently trying to figure out what was going on. As it became more clear, we realized a massacre had happened against men, women, and children; innocent peoples living in refugee camps fleeing from oppression and occupation. At 18 years old, it was an eye opener indeed sparking anger, hatred, frustration…I mean who in their right minds would do such a thing.

As it turns it out, it was a turning point in these young man’s life; a wakeup call or a call to protest. The gang and I headed down to the Israeli Embassy in Los Angeles to join our fellow humans in protest of such a mass killing. It was intense. FBI everywhere! Police in stormtrooper garb. Of course, an appearance by the late great terrorist himself, the convicted and subsequently killed off in jail IRV THE PERV commonly known as the west coast leader of the Jewish Defense League (JDL). He as at his best. All these people protesting, screaming, yelling, pleading for cooler heads. It was a turning point indeed sparking a lifetime of activism and protest against injustice all over the world.

But it was NOT just me that Ariel Sharon inspired that fateful day in 1982, it was millions of others who were shocked by the brutality of the event, but the tacit support of the state of Israel and its respected General Sharon. It blew the cover of the narrative that Israel was some sort of benevolent entity, righteous, and humane in its foundations.

You know, I have read many things about Theodore Herzl and his Zionist dream of a state for the Jewish peoples. Of course, at first he was all about Argentina and considered Uganda briefly before settling on Palestine which gave him a nice sales pitch to European Jews to pack up and head for “home” where their alleged ancestors were from. It was a good dirty pitch that he thought he could really utilize to motivate the Euro Jews to leave and it worked right?

Anyway, no matter how jaundiced the vision was, short sided, ignorant, and stupid, I am NOT convinced that Herzl could envision that these Europeans could commit such savagery against an indigenous population. In fact, by all accounts, it appears that Herzl envisioned a completely different Israel with many languages and cultures.

Thus, it is entirely possible that if he were alive today, he may be in complete shock that his vision created monsters like General Sharon who have such high contempt for human life that they would freely massacre without remorse in the style of Josef Stalin, Adolf Hitler, Pol Pot, Augustus Pinochet, and the grand Pooh-Bah of contempt, mayhem and massacre, the venerable Genghis Khan. Yes, he may have pulled the plug on Sharon many years ago to save humanity. I don’t know. We will never know.

What we do know is that Israel has become a pariah state, a vicious hateful racist apartheid state with NO vision except some ugly 20th century exceptionalism that no longer fits into a connected world in our 21st century which demands freedom, liberty, and justice for all. And it’s not just Ariel Sharon that is in the way but others who hold on to dogma that no longer fits; whether one indicts the KINGS and GODs of other Middle East countries who oppress their peoples like Bahrain or Saudi Arabia or in Syria where holding on power is more important that giving the country to a new generation of connected peoples.

One can go on and on about the injustices in the Middle East. It’s everywhere and not exclusive to terror state of Israel. But in Israel, its’ uniquely overt and in your face. Heck, they even have a Berlin Wall to marvel at…yeah, a wall! Amazing right?

Look, the USA can never provide a road map to peace because the USA represents only Israeli globalist interest. The ties are so deep that average Americans can’t even dig that far to figure out how deep the roots go….it’s wrapped around the neck of every single American so badly that the oxygen no longer passes to their brains shutting off all thought rendering any conversation with an average American on the issue of peace, justice, and freedom a complete waste of time.

But here in the rest of the world, where we have billions of us that are NOT marketed to by AIPAC and their assigns, well, we can look at both sides and see the forest from the trees.

ARIEL SHARON DEAD? When Arial Sharon was presiding over massacres in SABRA and SHATILA (1982), I was in my cousins garage watching the news of this in horror on a black and white television. Later I wrote this song about that garage and that experience called PROTEST GUITARS!  Signed Johnny Punish

Email newsletters for bands at ReverbNation.com

Now, this long time Ariel Sharon inspired activist is saying that the only real solution to diffuse the ZIONIST nightmare is a unified free, liberated, and just Middle East. We can do that through a Middle East Union; a United States of the Middle East, using all the future technology to insure that it’s a new updated version that protects through a real transparent Constitution and Bill of Rights.

It can have a new economy bypassing the Federal Reserve and central banksters who have messed it up in the first place ending their reign of terror….maybe we can use BitCoin as the Middle East Union currency. How’s about that as an idea? And maybe have a direct democracy, using future smart phones as tools for people to participate directly eliminating the need for a representative republic.

And maybe we can absolutely insure that all Jews, Christians, and Muslims would have the greatest rights on man to worship in freedom under protection of law with freedom to travel and enjoy their personal faith and maybe the union will be multi-cultural and tolerant protected by law. Maybe it can be a new Middle East, a global promised land for all. Now would that make the Butcher of Beirut, the disgusting and venal General Sharon turn in his grave?

Thank You Ariel Sharon for inspiring us and since we were unable to bring to you to justice in this life, may you now go straight to hell where you belong and face the fires of eternity! 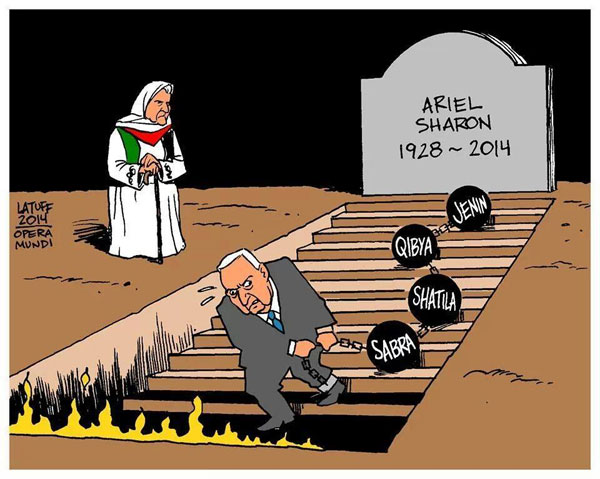