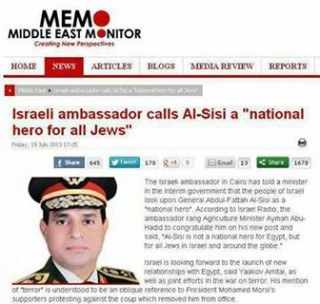 According to the al-Sisi junta, more than 98% of Egypt’s voters have approved a new “constitution” that establishes a permanent totalitarian dictatorship.

Whenever 98% of voters supposedly vote for anything, you know the “election” is a sham.

Fake unanimity is the hallmark of dictatorships. People like Stalin, Mao, and al-Sisi are always “elected” by near-unanimous “landslides.”

The Egyptian “election” was held at gunpoint, without safeguards for ballot secrecy. Anyone who voted “no” –  and even that vast majority who stayed home – risked serious reprisals from a government that has deemed all opposition – meaning the vast majority of the population – “terrorists.”

The so-called Egyptian constitution is a joke. It permanently establishes military control of more than a third of Egypt’s economy, without the slightest shred of transparency or civilian oversight.

It is this military domination of Egypt’s economy that is starving Egypt’s people. The Israeli stooge al-Sisi – a Moroccan Jew who appears to have infiltrated Egypt on a mission from the Mossad, and succeeded beyond his/their wildest dreams – is charged with keeping Egypt powerless and impoverished so it can never challenge Greater Israel’s plan to steal everything between the Nile and the Euphrates.

Polling data from the past three decades, and a series of elections during Egypt’s less than two years as a democracy, have shown that roughly two thirds of the Egyptian people support the Muslim Brotherhood – and Egypt’s democratically elected president Mohamed Morsi. The problem: That same two-thirds of Egyptians is disproportionately poor, rural, and powerless.

The military (propped up by US aid) and its supporters are parasites who do no useful work, yet own the lion’s share of the economy. Using its vast unearned financial clout, and with the support of Israeli psy-ops experts and a compliant media, the Egyptian deep state organized a PR lynching of the democratically-elected president Morsi, thereby destroying the only real democracy Egypt has enjoyed in 5,000 years of recorded history…and the only honest, largely non-corrupt leadership Egypt has enjoyed in modern times.

The Egyptian government, led by the hidden deep state, is corrupt from top to bottom. Since the corrupt elite won’t allow democracy, it seems that only a thorough Iranian-style Islamic revolution, ridding Egypt of its entire corrupt elite by whatever means necessary, could possibly save Egypt. When the Egyptian people finally figure out that “Al-Sisi’s a Jew, Egypt is Israeli-occupied territory,” that revolution could happen almost overnight.