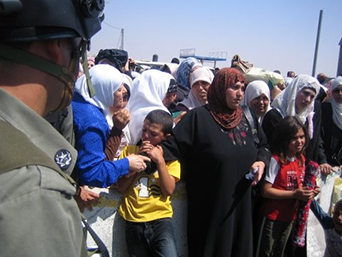 When it comes to contempt for and humiliations of others, no one group can match the Israelis for the evil, inventive ways they can make life pure hell for others specially the Palestinians. The “Machsoom” is the perfect reflection of a “core value system” of the “only democracy” in the Middle East.

True, the war criminal Ariel Sharon evacuated land thieves and criminal trespassers Jewish settlers from Gaza, but he made sure Gaza remained locked and under siege. Subsequent Israeli governments, Labor and Likud whose leadership is recipient of the Noble Peace Prize made sure the Occupied West Bank is under total military and settlers control using “Machsoom” to control daily lives for millions of Palestinians. The “Machsoom” has nothing to do with security but intentional intimidation and humiliations of millions of Palestinians under Occupation.

Over the years, Israeli defense establishment have used all of its imaginations recalling past humiliations and experience at the hands of the Nazis and Czarist Russia to developing ways to humiliate millions of Palestinians day in and day out.

The Berlin Wall, the Russian Gulag and Pogroms, the humiliations at the hands of the Nazis, combine all of these and you get what is called in Hebrew: מחסום‎, machsom, the more than 550 different variety of “security” checkpoints and crossings. Most famous or infamous are Qalandia, Huwara, and Bethlehem among others.

Of course when Arafat negotiated Oslo he made sure that some 3,000 of the so-called Palestinian VIP’s members of the PLO and Fatah who came back to manage the Israeli Occupation, never have to go through these checkpoints. The Palestinian leadership of Arafat and Mahmoud Abbass never made an issue of the enduring humiliations millions of Palestinians had to go through. Never could understand how this “Palestinian leadership” accepts such a privilege when millions have to suffer such humiliation.

All 3.5 million Palestinians who have to travel from one town to another, from their village to their farms, even visit neighbors, have to endure these cruel and humiliating Israeli checkpoints. The Palestinians have to endure, rain and cold, sun and wind hours upon hours, sometimes days, waiting for a young IDF draftee, racists to the core, angry with his life, perhaps with who he/she is, boring job, stop, frisk and search Palestinians young and old, men and women, healthy and sick and they do it with vengeance and joy.

The Israelis became notorious with their creativity building and erecting series of complex, some crude, some very sophisticated “security” crossing all with the same purpose, humiliation and contempt for the Palestinians. One has to see the Apartheid Wall far worst than the Berlin Wall, to see how far in time the Israeli imagination travel back to Europe of the past.

Here at these “Machsooms” Palestinian migrant and day workers have to line up few hours past midnight and wait few more hours in the early morning to go to their jobs in Israel. This is where ambulances with sick people and pregnant mothers have to wait for hours if not days to pass through to a nearby hospital. For many of the sick, these “security” checkpoints became a death trap where life ends while waiting for the OK to pass. Mothers and babies dies, sick and old die while members of the IDF having their coffee, talking on the phone, or send text messages or listening to music and try the few insulting words to communicate with waiting Arabs. Deaf ears and blind eyes, with no sense of humility or humanity. Did G-d made a mistake, sure did.

No one could ever imagine the impact of such wide spread “security checkpoints” on the daily lives of millions. On farmers going to their farms. On students going to their schools, on critically ill patients going to intensive care, on mothers and families visiting relatives, and of course on commerce among people and between communities. The Israelis know this and that is why they make sure the “Machsoom” is  the flag of the Israeli occupation.

I am sure all of you or at least most of you heard or perhaps watch the Oscar winning movie the “Pianists” with Adrian Brody playing the “Pianist”, a sad story of the humiliating dehumanization of Polish Jews at the hands of the Occupying Nazis,

The Pianist came out in 2003 and it seems that one of the Israeli checkpoint officers watched the movie and was so impressed with its message that in 2004 he forced a Palestinians “violinist” to play for him and his buddies while hundreds of people had to wait to get through the check point. Wissam Tayem had to endure these humiliations at the infamous “Huwara” checkpoint outside the city of Nablus.

Of course the story of Wissam hardly made the mainstream media in the US or become a major motion picture or even a subject of apolitical cable from the US counsel in Jerusalem. Yes, indeed, the Israelis learned too well from their tormentors the Nazis and the Czarists, and now they are taking their anger and frustration on the Palestinians. I leave you with this series of images of what is life is under the Israeli Occupation, an occupation generously funded by our tax dollars, the longest occupation in modern times.

Images from Qalandia crossing. Picture is worth a thousand words.