Home World So When Will International Justice Save Palestine?

“If you commit war crimes, crimes against humanity or genocide you will not be able to rest easily in your bed: the reach of international justice is long and patient…. There is no expiry date for these crimes….” – William Hague, British foreign secretary 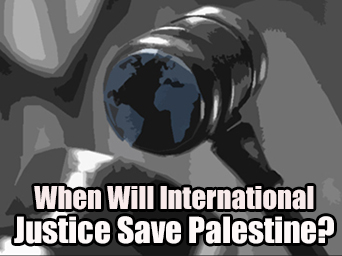 So when will international justice save Palestine?

He was saying all the right things, for example:

“The rule of law is critical to the preservation of the rights of individuals and the protection of the interests of all states.”

“You cannot have lasting peace without justice and accountability.”

“International laws and agreements are the only durable framework to address problems without borders.”

“Such agreements – if they are upheld – are a unifying force in a divided world.”

He spoke of a growing reliance on a rules-based international system. “We depend more and more on other countries abiding by international laws…. We need to strengthen the international awareness and observance of laws and rules….”

Some emerging powers, he said, didn’t agree with us about how to act when human rights are violated on a colossal scale, while others didn’t subscribe to the basic values and principles of human rights in the first place. He was talking about Syria although many in the audience must have had Israel in mind.

“The international community came together in an unprecedented way to address the crisis in Libya last year,” said Hague. “The Arab League, the UN Security Council, the UN Human Rights Council, the European Union, NATO and the International Criminal Court all stepped forward and played their part to protect a civilian population.”

Yeah. Funny how they have never come together for crisis-torn Palestine these last 65 years.

Hague, positively overflowing with fine words and sentiments, chuntered on. “We have to ensure that when we are trying to build peace, we don’t overlook the need for justice…. Our coalition Government is firmly of the view that leaders who are responsible for atrocities should be held to account…. Institutions of international justice are not foreign policy tools to be switched on and off at will.”

He said referring leaders in Libya and Sudan to the ICC showed that not signing up to the Rome Statute was no guarantee for escaping accountability. “If you commit war crimes, crimes against humanity or genocide you will not be able to rest easily in your bed: the reach of international justice is long and patient…. There is no expiry date for these crimes….”

Woweee! Had he told Netanyahu this? Was this tough talking really from the man who watered down Britain’s laws of Universal Jurisdiction to protect Israel’s war criminals from arrest while shopping in London’s Bond Street? Israel and the US, after signing up to the Rome Statute, had second thoughts and ‘unsigned’ in order to escape the long reach of international justice.  At last it was beginning to sound like bad news for TelAviv’s and Washington’s thugs.

At the time of the Libya fiasco Hague announced he had signed a directive revoking Gaddafi’s diplomatic immunity and also that of his sons, his family and entire household. He bragged how the UK “drove” through a Security Council resolution referring what was happening in Libya to the ICC Prosecutor, saying it “sends a clear message to all involved, in the regime and any other groups that if they commit crimes and atrocities there will be a day of reckoning for them.”

Bravo! What a splendidly high-principled chap Hague suddenly seemed to be. And how swiftly he managed to get the International Criminal Court’s attention when he wanted to. But we didn’t hear Hague and his friends call for a reckoning with the psychopaths of the Israeli regime when they committed mega-atrocities against Gaza’s civilians just two years earlier. Instead they tinkered with our laws of universal jurisdiction to enable suspected war criminals to walk free. Gaddafi wasn’t welcome in London but the Foreign Office happily rolled out the red carpet for Livni, Lieberman, Barak and Netanyahu, while Hague conducted the brass band.

Our foreign secretary rounded off his speech by saying: “There is no doubt where Britain stands: we are with those who say that international law is universal and that all nations are accountable to it…. We are a country that believes in and upholds the Responsibility to Protect, and that is prepared to act to save lives – including through military action as a last resort. We actively support a rules-based international system…. We pledge to recommit to the importance of fighting impunity for grave international crimes wherever they occur…. We will be a robust supporter of the International Criminal Court in its investigations.”

Trampled Palestinians dispossessed by a brutal military occupier and sitting among the smoking ruins of their homes, or eking out a squalid existence in their refugee camp, must have been impressed.

A year after Hague’s splendidly robust performance a policy paper issued by the Foreign & Commonwealth Office, dated July 2013, https://www.gov.uk/government/uploads/system/uploads/attachment_data/file/223702/ICC_Strategy_Final.pdf  hammered home the points he had made with these ‘key messages’:

The document also promised that the UK government would be “a powerful advocate of the ICC in all our diplomatic relations” and “encourage more states to ratify and accede to the Rome Statute…. Widening the reach of the Court beyond the current 122 States Parties will increase accountability and help challenge impunity.”

And if nations didn’t play ball, the British government would consider mechanisms “to enforce cooperation and to take effective action against those who fail to cooperate”.

Heavens, no. Although the Foreign Office says: “Our support for the ICC is unswerving,” Agent Cameron, Britain’s PM, has said: “Our support for Israel… is unshakable.”  The two opposing positions, unshakable and unswerving, are hopelessly incompatible. And in this case unshakable trumps unswerving. Sorry folks, international justice automatically switches off when it comes to Israel’s war crimes.

Every state should join the ICC… except Palestine?

In a masterly critique, analyst Dr David Morrison exposes Hague’s dishonesty http://david-morrison.org.uk/palestine/icc-except-palestine.htm . The Occupying Power in Palestine – Israel – has long been committing acts that Britain regards as illegal. “Our position on Israeli settlements in the Occupied Palestinian Territories is clear: they are illegal under international law, an obstacle to peace and make a two-state solution harder to achieve,” states the FCO’s website.

Not just illegal, settlement building is actually a war crime under the Rome Statute. “It involves the Occupying Power transferring some of its own civilian population to the territory it occupies,” explains Dr Morrison.  “And under Article 8.2(b)(viii) of the Rome Statute the transfer, directly or indirectly, by the Occupying Power of parts of its own civilian population into the territory it occupies is a war crime.”

Since Israel has transferred well over 500,000 Israeli civilians into territory it occupies, and is still doing so, there is a prima facie case that Israelis responsible for the settlement programme, including the present Prime Minister Benyamin Netanyahu, are guilty of war crimes.  Americans and others who fund settlement projects may be guilty of aiding and abetting war crimes.

As we’ve seen, the FCO’s strategy paper talks about extending the ICC’s jurisdiction so that it can more easily challenge impunity. But, says Morrison, eagerness to challenge Israeli impunity was conspicuously absent when Hague spoke in the House of Commons a few months later on 28 November 2012.  Then, he offered UK support for a UN General Assembly resolution granting Palestine statehood on condition that Palestinian leaders promised they would not become party to the Rome Statute. Hague told MPs that if the Palestinians pursued ICC jurisdiction over the Occupied Territories at this stage, it could make a return to negotiations impossible.

“Believe it or believe it not” says Dr Morrison, “it is British policy to extend the jurisdiction of the ICC to every corner of the earth, except the Palestinian territories occupied by Israel since 1967.  There it is apparently inappropriate for Britain to challenge impunity.”

Two days later, Israel retaliated against the UN granting statehood to Palestine by announcing plans for yet more settlement building in the West Bank and East Jerusalem. Hague’s response was the same old mantra: “Israeli settlements are illegal under international law and undermine trust between the parties.” If settlements are illegal under international law, then those responsible should be tried in an international court and, if found guilty, punished appropriately. “Dare I suggest,” asks Dr Morrison, “that, to this end, Palestine should be encouraged to accept the jurisdiction of the ICC?”

A state can grant jurisdiction to the Court by becoming a Party to the Rome Statute (Article 12(1)) or by making an ad hoc declaration accepting the Court’s jurisdiction (Article 12(3)). The Palestinian Authority in January 2009 tried to grant the ICC jurisdiction over the Occupied Territories by making an ad hoc declaration, so that Israelis could be prosecuted for atrocities against Gaza during Operation Cast Lead. But the ICC Prosecutor took more than three years to decide that the Court couldn’t accept the jurisdiction. Whether or not Palestine was a “state” within the meaning of Article 12(3) was a question for the UN Secretary General who, in case of doubt, would defer to the guidance of General Assembly.

The UN General Assembly shortly afterwards passed resolution A/RES/67/19 accepting Palestine as a state, apparently settling the question. However, the ICC Presecutor Fatou Bensouda has said, reportedly, that she doesn’t think retrospective claims could be considered going all the way back to the founding of the Court in 2002. The earliest would most likely be 29 November 2012, the date when the UN recognised Palestine as a state.

Nearly 14 months have gone by and the Palestinians still haven’t joined the ICC because they’ve come under fierce pressure, especially from the US, not to do so.  They promised the US not apply for membership of any of the UN’s bodies until April 2014 when the present round of US-brokered ‘negotiations’ with Israel is due to end.

“It is absolutely outrageous,” says Dr Morrison, “that the US, with the support of Britain and others, has pressurised Palestinians into forgoing a possible legal means of redress against the illegal actions by the power that has held them under military occupation for almost 50 years.”