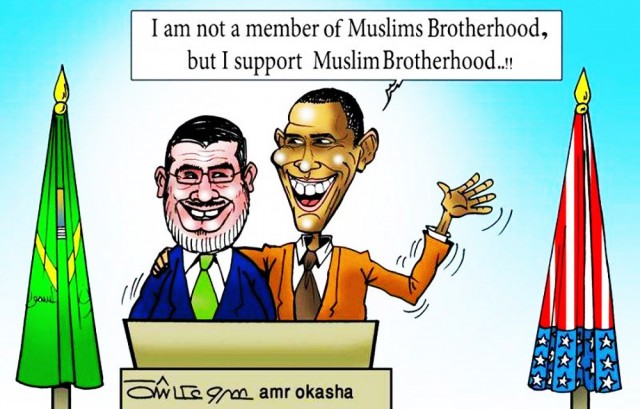 “We started this mess, the so called Arab Spring, and we the Egyptians once again will finish this whole business. But this time we’re going to make it right” said Soad Ali, one of the Egyptians, a house wife, who headed to the poll stations on January 14-15th and voted yes in a referendum on the country’s new constitution.

And when I asked Mrs. Ali about the latest incidents of terror that Egypt has witnessed recently she replied “I hear not the sounds of sporadic and desperate bombings, but I hear the sound of the terrorist group of Muslim Brotherhood falling down”

On January 2011, and on the same streets and squares of Egypt, began a sweeping phenomenon of unprecedented rallies and anti-regime protests that engulfed the whole Middle East and beyond.

And when Egyptians say that this time they will finish it right, does that mean that what started on January 25 2011 was wrong.

The January uprising was not wrong, but it was made wrong by many players, domestic and foreign, on the political scene back then. And in the absence of leadership and a concrete political vision, many forces began to exploit the mass protests at Tahrir square to their own advantage.

However, Tahrir square protests have become a world model that other nations have been inspired by till this very day- take a look at the mass protests underway now in Ukraine and Turkey.

The political vacuum after deposing Mubarak has left the US and Europe in the cold startled by the rapid turnout of events and the new reality on the ground.

The US&EU had only one question in mind “Who is going to replace their strong man in Egypt?” In other words who would be Tel Aviv’s new neighbor and is he a friend or foe? Egypt is a pivotal country and all eyes were following the unfolding days of a never expected revolution.

The Ghost of Muslim Brotherhood

Revolutions are two –faceted and as they promise to bring hopes for a better tomorrow, revolutions always bring in chaos and uncertainty along the way.

In that foggy scene, the ghost of the Muslim Brotherhood MB emerged and any hopes for a better tomorrow soon faded away.

Ghosts always come out in the dark, and the two years that followed the January 25 2011 had indeed been one of the darkest years in the history of modern Egypt.

As the MB group members, including the deposed president Morsi, were breaking out of jail with the help of Hamas militias on Jan 2011, they embarked on hijacking the Egyptian revolution and driving the fast lane to power grab.

Hijacking Egypt’s revolution and undermining this pivotal Middle Eastern country was part of a bigger plan for a new and rather chaotic Middle East ushered in when the US invaded Iraq in 2003.

The new political map for the Middle East did away with all the secular and strong regimes and in their places inserted religious fanaticism and conflict.

And as the Al Qaeda affiliates’ of Mujahideen began to spread violence, obscurantism and intolerance destabilizing Iraq, Yemen, Syria and Libya, Egypt was handed over to the MB to do the same job.

The long line that stretched from the Persian gulf and Euphrates river passing through the East Mediterranean, all the way to North Africa was been stripped out of its strong regimes and armies, crushed by false flag revolutions and war and fragmented into smaller conflicting balkanized unities- hopefully smaller than Israel.

This was a new generation of war- Fourth generation warfare– taking place. Maybe 4GW that swept the Middle East was orchestrated by foreign intelligence but it wouldn’t have been possible hadn’t it been for the sectarianism and hatred created by the rampant Jihadi and terrorist teachings of the MB- the mother ship for all Islamist terrorist groups around the world.

And if we spotted Israel, safe and thriving, in the heart of that long line of fire, it won’t be hard to figure out who is benefitting and may be help orchestrating this whole creative chaos.

And speaking of Israel, MB were going to be Jehovah’s gift for the Israelis, as they were in the process of finalizing a secret deal with the US to give up a gigantic portion of Sinai and hand it over to Hamas to accommodate the Palestinian refugees.

Had this bad deal been actualized, Tel Aviv would have gotten rid of the chronic Palestinian headache by yet more fraudulent grab of neighboring Arab land.

So when we talk about rejecting and delegitimizing the MB we are not talking about ousting a so-called democratically elected president rather we are actually talking about saving Egypt from an imminent danger.

And if you wonder about the majority who voted yes for the MB ousted president, and how could we ignore their their will, I assure you that the whole electoral campaign was fraudulent.

When you equate a political group with an organized religion, then you are not simply exploiting the gullible, the uneducated and the needy but you are violating the very essence of any democratic elections.

The MB was so politically naive they wasted no time to reveal what they had in mind for Egypt, and so they began to turn Sinai into another Afghanistan and flooded the Egyptian borders with nonstop convoys of smuggled heavy weaponry.

Gangs of armed Islamist terrorists gaining hold in Sinai was the MB idea of a parallel army of Mujahideen to challenge the Egyptian army and use it in a show of force and a long-term destabilizing game of 4GW.

MB were up to replacing the main institutions of the country like the police, Judiciary, media and of course the army with other brotherhoodized entities.

But the most dreadful danger of the MB is that it’s a group that doesn’t recognize Egypt’s historical borders, doesn’t respect its culture and ancient history and only define the identity of the country’s citizens based on their religious beliefs and not by their nationality and citizenship.

So a MB from Hamas or even Afghanistan is closer and more eligible to fit into their regime than say for instance, a Coptic Egyptian.

And in that sense no wonder MB are relying on foreign militants from Hamas, Yemen and Pakistan to spread terror and try to destabilize Egypt before the upcoming presidential elections- watch video of the latest terrorist operations of MB militants in Cairo on January 24 2014

The post Mubarak era is not just about another regime taking over or another president following his corrupt predecessor, but it is a crucial turning point in the modern history of Egypt.

“It is a time of crisis and in time of crises Egypt can’t afford the luxury of strictly following the book, looking good in the eyes of  biased international agencies & media or wait for Oks and signals from Uncle Sam or anyone else”

And speaking of the west, it’s worth mentioning that most Egyptians now don’t give a damn about how the US or EU see or think of their governance, or better yet the way they save the day for Egypt and plunge ahead amidst all that turbulent sea of terror, conspiracies and political chaos.

The western main stream media, along with Al Jazeera of course, have been battering the Egyptian June 30 revolution labeling it as an illegitimate military coup. For the last six months western pundits and political analysts have been wailing and whining about how democracy took a nosedive in Egypt.

Well, if the democracy the west is crying over is the one that could have allowed a terrorist group like the MB to devour Egypt then Egypt can and will absolutely do without the western idea of democracy.

My dear western pundits and analysts you are not talking about some obscure little island in the Pacific Ocean, but you are referring to Egypt; a unified sovereign country that has been ruled by a centralized government and protected by a loyal national army since 3500 years BC.

We live in an ancient country that always resorted to its national army in times of danger and crisis and will always do.

And if western democracy allowed the devastation of Arab countries like Iraq, Libya and Syria … then Egypt doesn’t certainly need your idea of democracy.

And moreover, if we contemplated and examined the Egyptian scene carefully, maybe we would discover that Egypt is redefining democracy, teaching policy makers a brand new lesson and ridding the whole Middle East from a dreadful political chaos cloaked in a spring of false flag democracy and revolutions.

Real democracy, not the one inserted by creative chaos, is a contract between the governor and the governed that could be, and should be, broken if the terms of the governed consent get violated at any time.

Real democracy is a long term evolving process the core of which is economic, educational and social development and not orchestrated upheavals and military invasions and brotherhood of fanaticism.