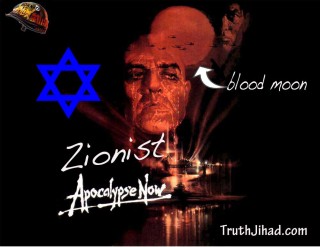 Will a Zionist apocalypse erupt during the coming two years?

Some Zionists seem to think so. They are predicting that an unusual series of lunar eclipses or “blood moons” expected in 2014 and 2015 augurs war and disaster on an epic scale.

One Zionist website warns: “It cannot be regarded as coincidence that all four blood moons of 2014/15 occur on religious festivals of Israel, together with two eclipses of the sun also on important days in 2015…According to NASA – Four ‘blood-red’ TOTAL lunar eclipses WILL fall again on Passover and Sukkoth in 2014 and 2015… the same back-to-back occurrences at the time of 1492, 1948 and 1967” (sic).

Meaning? “The events may involve war in the Middle East and a financial crisis around the world that will affect the land of Israel or the Jewish elite in New York City.”

These blood-moonbat Zionists think that 2014 or 2015 will go down in history alongside 1492 (the year that Jews, along with Muslims, were expelled from Spain), 1948 (the creation of the Zionist entity) and 1967 (the Zionist invasion and occupation of Jerusalem).

Citing a satanic Rothschild-financed hoax, the so-called Scofield Bible, these Zionists hope that 2014 or 2015 will bring a major Middle East war that will enable the Zionists to finish the ethnic cleansing of Palestine, demolish the al-Aqsa mosque, build a Zionist temple on the ruins of the mosque, and consecrate it with blood sacrifices – beginning with the slaughter of a pink heifer.

Are the Zionists insane? Obviously. But unfortunately, the ongoing influence of insanity on world affairs cannot be discounted.

They would do well to consider the words of Shakespeare’s Julius Caesar: “The fault, dear Brutus, is not in our stars, But in ourselves…”

The Zionists have been sowing seeds of hate. They will reap a harvest of calamity. When they do, they should not blame the stars.

Even the scriptural sources of the “blood moon” prophecies should give them pause.

If the Zionists considered their own scriptures more carefully, they would realize that they have it  backward. The prophecies they cite equate blood moons with disaster for the Jewish people. That means that the creation of the Zionist entity in 1948, and the murderous theft of Jerusalem in 1967, were disasters for the Jewish people – just like the expulsion from Spain in 1492. Therefore, we might expect 2014 and 2015 to bring an epic collapse of Zionism: The harvest of the toxic seeds sowed in 1948 and 1967.

But we do not need a Scofield Bible to forecast the collapse of Zionism. The worldwide anti-Zionist movement is growing every day – even in the “homelands” of the Zionist settler-colonial movement.

In Europe, more and more public figures are speaking out with increasing boldness against Zionism. The EU government has banned all 28 member states from cooperating with any Zionist entity that operates in the territories stolen in 1967 – including the West Bank, East Jerusalem, and the Golan Heights.

A popular backlash against Zionism is exploding across Europe. Hundreds of thousands of Europeans have been flashing the “quenelle,” a satirical Zio-Nazi salute invented by France’s greatest contemporary comedian, Dieudonné. The authorities in France, who are under the thumb of the powerful French Zionist community, are panicking. They have prosecuted Dieudonné for speaking out against Zionism, and recently raided his house under a transparently bogus pretext. But every attempt to squash the “quenelle” just shows how powerful (and humorless) the Zionists really are, and convinces even more people to join the movement.

In the USA, the American Studies Association has launched the first academic boycott of Israel – a landmark breakthrough for the boycott, divestment and sanctions (BDS) movement. Heavy-handed attempts to quash BDS, such as the New York State Legislature’s near-unanimous passage of a bill outlawing academic boycotts, are backfiring. Like the French government’s persecution of Dieudonné, and its brutal treatment of quenelle-flashing protesters at a huge demonstration in Paris, such actions simply underline that the French and American governments are under near-total Zionist control…which only increases the angry populist backlash.

This has nothing to do with the moon. The Zionists are facing catastrophe because they can no longer suppress the truth. In the age of the Internet, and the alternative media it spawned, simply buying up the mainstream media and the politicians no longer suffices.

So perhaps the Zionists really will be facing an apocalypse in the “blood moon” years of 2014 and 2015. But that does not necessarily mean world war or financial collapse.

The word “apocalypse” is popularly understood to mean “global catastrophe or calamity.” But its first meaning is “disclosure” or “unveiling” – the disclosure or unveiling of the truth.

It is not any Iranian nuclear bomb, or Palestinian population bomb, that should concern the Zionists. Their real enemy is the slow-motion truth bomb that is gradually exploding across the world.

Zionists vaguely sense this. They realize, on some level, that their racist colonial project is doomed. That is why they suffer from what Gilad Atzmon calls “pre-traumatic stress disorder.”

The unveiling of truth, and ensuing demand for justice, is the real “apocalyptic threat” that will soon bring about the annihilation of the Zionist entity.