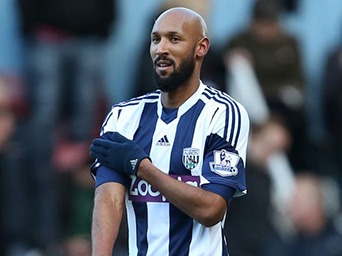 Finds Anelka not guilty of anti-Semitism but bans him, fines him and re-educates him anyway

West Bromwich Albion’s star player Nicolas Anelka recently landed himself and his club in hot water when he allegedly performed the Quenelle after scoring a goal. It blew up into a furious storm in a Zionist teacup.

The Quenelle is a gesture made notorious by the French comic Dieudonné M’bala M’bala. It involves touching or gripping your shoulder with one hand while holding the palm of your other hand outstretched and pointing to the ground – a kind of suppressed Nazi salute. Dieudonné’s fans say it’s simply a gesture of defiance, an anti-establishment ‘up yours’, but it has been branded anti-Semitic with knobs on by the gesture police so Anelka was promptly charged by the Football Association with making an “abusive” gesture.

Anelka insisted that the Quenelle was harmless anti-establishment stuff in support of his friend Dieudonné. Unfortunately the comedian, who is said to have created the salute, has been prosecuted in France for anti-Semitism.

Actually the Quenelle first came to my notice back in 1964 in the film ‘Dr Strangelove or: How I Learned to Stop Worrying and Love the Bomb’ http://www.youtube.com/watch?v=JaTR46iU1Do , in which Peter Sellers plays a demented former Nazi scientist who repeatedly performs the same strangulated Nazi salute from a wheelchair.How a piss-take of the Nazis could, 50 years later, be interpreted as an anti-Semitic crime is, I confess, beyond me.

Will screenings of Dr Strangelove henceforth be banned?

The point about Strangelove’s salute is that his arm is uncontrollable and the hand wears a menacing black leather glove. Perhaps Anelka’s defence counsel should have pleaded AHS – better known as Strangelove’s “alien hand syndrome”.

Matters have now run their predictable course and Anelka has been banned for five matches by the FA and fined £80,000.And West Brom have suspended him. But the more thrusting Ziofreaks don’t think this is enough.

The FA’s three-man Independent Regulatory Commission, chaired by a QC, found that…
In or around the 40th minute of the match he made a gesture (known as the ‘quenelle’)which was abusive and/or indecent and/or insulting and/or improper, contrary to FA Rule E3(1); and….

That the misconduct was an “Aggravated Breach” as defined by FA Rule E3(2) in that it included a reference to ethnic origin and/or race and/or religion or belief….

We did not find that Nicolas Anelka is an Anti-Semiteor that he intendedto expressor promoteAnti-Semitism by his useof the quenelle.

He must, however, submit toa compulsory education programme.This is reminiscent of the sinister re-education inflicted on Liberal Democrat MP David Ward last year after he annoyed prickly Holocaust bosses with alleged misuse of “language” rather than arm movements.

Simon Johnson, Interim Chief Executive of the Jewish Leadership Council, said of the verdict: “The FA was sent pictures of the gesture being made at such ‘pillars of the establishment’ as the Auschwitz concentration camp, the Berlin Holocaust memorial, the Anne Frank House….With the accepted definition of anti-Semitism, it does not matter whether Anelka, or even officials within The FA’s disciplinary department, think that a gesture is anti-Semitic or not. Whether something is anti- Semitic depends on the perception of the victims of the insult or abuse.It is therefore robust practice in anti-Racism to seek the views of the group likely to be offended.” http://www.thejlc.org/2014/02/nicolas-anelkas-regrettable-legacy/#sthash.25Yh8iyH.dpuf

Palestinians – Muslim and Christian — living in humiliation under Israel’s apartheid jackboot, take note of this “robust practice”.
And speaking to BBC News the vice-president of the Board of Deputies of British Jews, Jonathan Arkush, explained that the Quenelle was ‘anti-system’ in the sense that Dieudonné calls the French Zionist lobby that has taken the government prisoner ‘the system’. “So you know exactly what he’s getting at. We don’t see the gesture as benign at all… Making a gesture that has racist connotations is a very serious matter, even if it wasn’t meant to be.”

Watch the video of that fateful moment linked here (2 minutes in) http://www.bod.org.uk/live/content.php?Item_ID=130&Blog_ID=1101. Most people wouldn’t notice it had happened. Or, if they did, they’d suppose Anelka was simply nursing a bruise to his upper right arm. It certainly wasn’t a dramatic or triumphant gesture and only paranoid ‘twitchers’ would have spotted it.

The FA, after all the fuss, now judges that Anelka’s use of the Quenelle wasn’t anti-Semitic at all.Confused? They seems to be. Are we to deduce, then, that the gesture wasn’t racist and the Quenelle isn’t either?So was the incident really a flogging offence? Why the fine? Why the ban? Why the need to brainwash this sporting hero?The words “knickers” and “twisted” spring to mind.
Consider the sickening context….

The FA bristles with indignation at any hint of racism in the game and has armed itself with elaborate rules to deal with it, as Anelka discovered. Yet this governing body has been remarkably quiet about apartheid Israel’s inclusion in the European under-21 championship and hosting of the finals last year in Tel Aviv. The racist regime is not even part of Europe. It cruelly obstructs Palestinians, whose territory it illegally occupies, in all sport, preventing travel to international fixtures, blocking movement between Gaza and the West Bank and making training a national team impossible. It even murders Palestinian footballers or imprisons them without trial.

It was left to European footballers themselves to sign a statement condemning in particular Israel’s assault on Gaza http://www.telegraph.co.uk/sport/football/news/9715577/Premier-League-players-call-on-Uefa-to-remove-Israel-as-European-U-21-hosts.html . It also read: “We are informed that on 10 November 2012 the Israeli army bombed a sports stadium in Gaza, resulting in the death of four young people playing football…. We are also informed that since February 2012 two footballers with the club al-Amari…. have been detained in Israel without charge or trial.

“It is unacceptable that children are killed while they play football. Israel hosting the UEFA under-21 European championship, in these circumstances, will be seen as a reward for actions that are contrary to sporting values.”

Electronic Intifada reported that in a letter to the president of the European soccer governing body UEFA, dozens of Palestinian football clubs, managers, players and other Palestinian sporting figures based in Gaza urged UEFA not to “reward Israel for its violent repression of Palestinian rights.”

“Israel works endlessly to repress Palestinian football, just like it does many other forms of Palestinian culture,” Sarsak wrote, adding, “Israel does not behave like a normal state where citizens can play sport freely. Why then, should it be granted the honour of hosting the UEFA U21s championship in 2013, or the women’s U19s in 2015?”http://electronicintifada.net/blogs/ali-abunimah/after-destroying-paralympic-hq-and-stadium-gaza-israel-must-not-host-uefa

Furthermore, between 14 and 22 November 2012 the headquarters of Palestine’s National Paralympic Committee and other sports infrastructure were destroyed by Israel’s 8-day bombardment.

On 21 November, the official website of the International Paralympic Committee reported: “On Monday morning, the office of the Palestinian Paralympic Committee in Gaza was exposed to heavy shelling that destroyed the building and infrastructure of the nation’s Paralympic headquarters. The Palestine Stadium and accessible Palestine Sports building were fully destructed. The sports facilities were both used by athletes who trained for the London 2012 Paralympic Games and athletes with an impairment who live close to the Gaza strip.”

The Jewish state bombed Gaza’s stadium before, in 2006, rendering it unusable. Football’s international governing body FIFA helped rebuild it.So the FA in England needs to get things in perspective, keep in mind Israel’s monstrous acts and condemn them as vigorously as other racist abuse, if not more so.

A BDS role for AHS ?

France isn’t the only country where the Zionist lobby has taken the government prisoner. As a result of the pumped-up Anelka incident, and the objectionable way it was handled, it would be no surprise to find people of conscience all over the world suddenly and mysteriously afflicted with AHS.

As the Quenelle farce played out I was reading Veterans Today editor Dr Kevin Barrett’s hilarious rant against his being omitted from the Top Ten Anti-Semites List whilehis editorial colleague Gordon Duff won a coveted place on it http://www.veteranstoday.com/2014/02/28/top10list/
Barrett asks despairingly what else he has to do to make the list. “I am…. perfectly willing to express even more disgust for Israel than I already have. If there are any uncomplimentary adjectives I have not yet hurled in the general direction of the Zionist entity, just let me know and I will hurl them forthwith.

“Honestly, I will do almost ANYTHING to get on your list….You name it, I’ll do it.”

Well, Kevin, a sure way to get noticed is to kick a ball around outside Abe Foxman’s office while performing the Quenelle, aka Alien Hand Syndrome. For good measure, next time you’re in London do the same outside the Board of Deputies and the JLC.